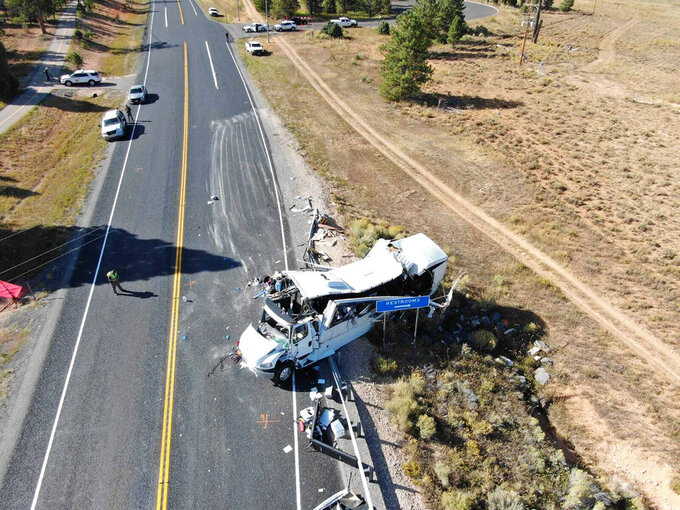 Uncredited, ASSOCIATED PRESS
FILE - This photo provided by the Utah Highway Patrol shows a tour bus that crashed near Bryce Canyon National Park in southern Utah on Friday, Sept. 20, 2019. Federal investigators say a tour bus crash that threw more than a dozen people onto a remote Utah highway in 2019 and killed four Chinese tourists highlights a lack of safety standards for bus roofs and windows. The National Transportation Safety Board released its final report on the crash Thursday, June 3, 2021. (Utah Highway Patrol via AP, File)

The bus crashed after the driver drifted off the road and “overcorrected” as he steered back into the lane near Bryce Canyon National Park, the National Transportation Safety Board found in its final report on the crash.

All 30 people on board were hurt in some way, a grim toll made worse by the roof caving in during the crash and the inconsistent seatbelt use by the passengers, the report found.

Ten people on the bus weren’t wearing seatbelts, and some of the belted passengers wore the restraints loosely, making them less effective.

Investigators found no problems with intoxication, distraction, excessive speed, lack of sleep or the driver’s experience. A previous report found the bus had problems starting earlier in the day, but further examination found no mechanical issues or other malfunctions.

The driver had told investigators the road felt “slippery,” and it was newly paved at the time, but tests showed normal friction.

Instead, the report cited the National Highway Traffic Safety Administration’s failure to develop and issue standards for bus roof strength and window glazing to prevent people from being thrown out of buses during a crash. The highway safety agency did not immediately respond to a request seeking comment.

The report recommended that new commercial vehicles have roofs strong enough to “provide maximum survival space” and meet window-glazing standards that keep people from people thrown out during accidents.

The report also recommended new commercial buses come with lane-departure systems to alert drivers when they start to drift off the road.

The group of older adults from China was on a seven-day tour that started in Los Angeles and was set to end in Salt Lake City. The bus crashed only a few miles from Bryce Canyon National Park, which is known for its intricately shaped red-rock spires called hoodoos.