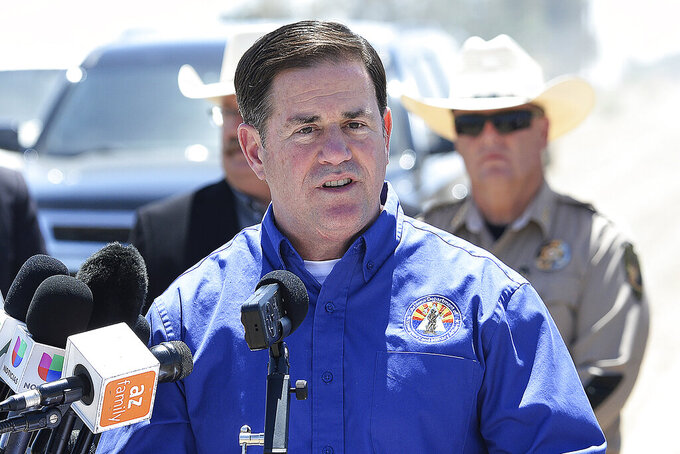 PHOENIX (AP) — A pair of Republican Arizona lawmakers who objected to a $1.9 billion tax cut in a $12.8 billion GOP budget deal were close Thursday to winning major concessions that would secure their support for the spending plan before the whole deal came to a halt over the tax cut's effects on city revenue.

The changes include smaller tax cuts until actual revenue comes in above projections and a much larger paydown of state debt.

Senate President Karen Fann cautioned Thursday evening that details could change until a deal is sealed.

“Actually, nothing’s been agreed upon because until we get 16 and 31 (votes) everything is fluid,” she said.

The changes negotiated by Sen. Paul Boyer and Rep. David Cook would initially limit the tax cuts to $1.3 billion by delaying implementation of the flat 2.5% income tax in the proposal in favor of two slightly higher rates. The deal still shields high-earning Arizonans from the full impact of a new voter-approved surcharge of 3.5% on income above $250,000 for individuals or $500,000 for couples by creating a maximum tax rate of 4.5%, which is the current top tier rate without the surcharge in Proposition 208.

Cities would get a larger share of income tax and protections in case state revenue doesn't meet projections under an early version of the new deal, Boyer said. They would get 18% rather than the current 15% of state income tax collections.

That revenue guarantee, however, was the point of contention that Boyer and Cook both said prevented sealing the deal on Thursday.

Boyer said he thought city revenue streams would be protected if cash flow came in lower than expected by increasing the share beyond 18%. But midday, he said that had changed.

He said he could not support the plan after Senate negotiators “moved the goal posts.”

Late Thursday, Cook said he thought he had the problem solved, setting up what he called the largest debt payoff in state history “times 10.”

“$1.9 billion in debt reduction, which is going to have a cost savings to taxpayers north of $270 million a year going forward,” Cook said.

With a constitutional deadline to enact a spending plan approaching on June 30, House Speaker Rusty Bowers was frustrated with the delay.

He said if a deal isn't cut by Tuesday, he will try to pass a “skinny budget” that just funds government at current levels to allow time for more talks.

“We’ve been sitting here all day and twiddling our thumbs,” Bowers said. “So we’re going skinny on Tuesday — either put up or shut up.”

The initial deal struck between Republican leaders of the House and Senate and GOP Gov. Doug Ducey paid down much less of the approximately $14 billion in state debt and left the city share of income tax unchanged. Cities worried they would be forced to make budget cuts because their revenue relies so much on state-shared income tax.

Cook and Boyer also said that the tax cuts relied on rosy projections that were clouded by massive amounts of federal coronavirus recovery money. They also were concerned that the deal essentially ignored the large load of debt that the state is carrying, much of it accrued since the Great Recession.

Concessions they won delay the 2.5% flat tax and it won't go into effect unless revenue triggers are met. New payouts in the budget deal would erase large amounts of the Department of Public Safety's pension debt and some of the debt in the prison guard pension plan by making a $1 billion payment into those plans. The state would also put aside money to pay off nearly $1 billion in bonds backed by state buildings and lottery revenue.

Both of the debt payoffs free up cash now used to pay higher pension costs and bonding costs. Along with another payoff already in the plan, they will save the state $270 million a year.

The deal excluded Democrats who Gov. Doug Ducey said in recent weeks he was willing to work with to get a budget deal. With just one-vote majorities in the Senate and House, Republicans were unable to pass a budget if any one GOP lawmaker refused to back the deal.

Voters passed Proposition 208 in November to boost education funding, with the new money dedicated to pay more to teachers and support staff, for teacher training and education and for career and technical education. Protecting wealthy Arizonans from the new tax will cost the general fund $827 million in the coming year and $487 million a year going forward; schools will still get the extra money.

The massive tax cut package, which proponents called the largest in state history, would have cut more than 25% of state income tax revenue after being fully phased in over the next two years.

The new proposal envisions two rates, one at 2.55% and another at 2.98% with a phase-down to the original flat 2.5% over several years if revenue holds.

An Associated Press analysis shows the state is on the hook for $6.6 billion in pension debt and $7.6 billion in bonds, lease-purchases and payment deferrals. That includes $930 million owed to schools from a budget gimmick used following the Great Recession that delayed nearly $1 billion in payments.

The initial budget proposal that paid down school debt by just $30 million got a $35 million boost as part of the sweetener revealed earlier this month.