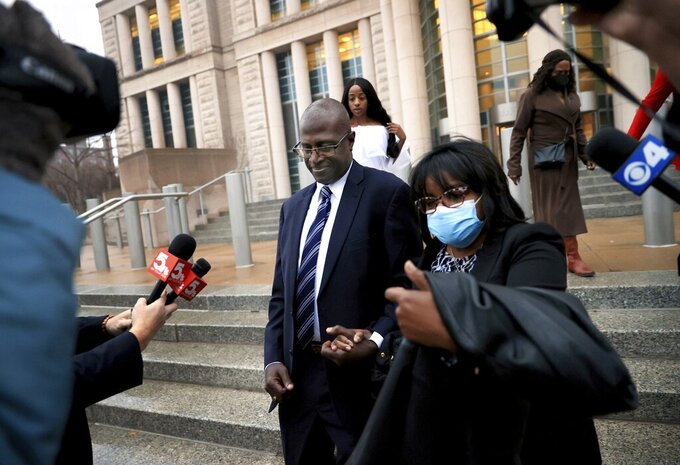 David Carson, ASSOCIATED PRESS
Former St. Louis Alderman Jeffrey Boyd and his wife Patrice Johnson-Boyd walk out of Federal Court in St. Louis past the media without taking any questions after he was sentenced to three years in prison on Tuesday, Dec. 6, 2022. (David Carson/St. Louis Post-Dispatch via AP)

ST. LOUIS (AP) — Three former St. Louis aldermen, including the longtime board president, will go to prison for accepting bribes from a businessman.

The sentences handed down Tuesday in federal court ended a three-year investigation. The businessman provided bribes in exchange for tax breaks and a reduced rate in obtaining a city-owned property. Federal officials have not named the businessman but the St. Louis Post-Dispatch reported he is facing his own federal charges.

Former Alderman Jeffrey L. Boyd was sentenced to three years in prison for bribery, wire fraud and insurance fraud. He was fined nearly $24,000.

Former Alderman John Collins-Muhammad was sentenced to nearly four years in prison and fined $19,500 for bribery and fraud crimes.

All three men are Democrats who were indicted in May and pleaded guilty in August.

“The victims here — the 300,000 residents of the city of St. Louis — expect their elected officials to do their jobs honestly and honorably, not line their pockets and swap official actions for cash,” U.S. Attorney Sayler A. Fleming said in a news release.