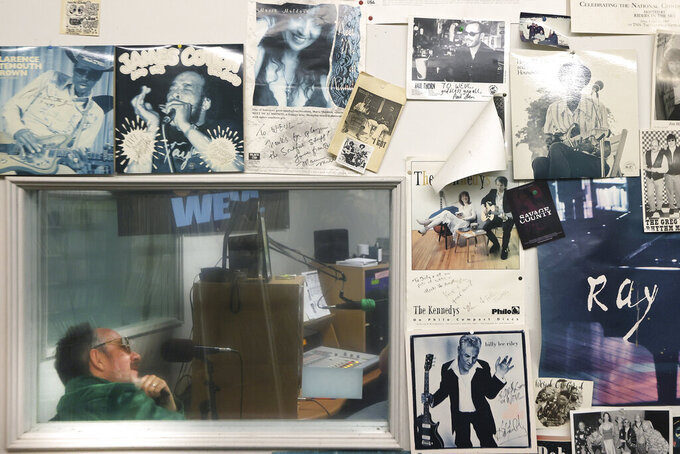 Joe Rondone, ASSOCIATED PRESS
Elvis Costello is seen in the booth at radio station WEVL on Tuesday, Oct. 12, 2021, in Memphis, Tenn., where he hand-delivered a copy of his new record "Magnificent Hurt," a limited-edition promotional disc. Costello will kick off his new concert tour, "Hello Again" Wednesday at Graceland. (Joe Rondone/The Commercial Appeal via AP)

MEMPHIS, Tn. (AP) — On July 8, 1954, Memphis deejay “Daddy-O” Dewey Phillips introduced Elvis Presley to the world (or at least the small part of the world that was within reach of WHBQ’s AM signal) when he became the first person to play Elvis’ debut Sun single, “That’s All Right,” on radio.

Tuesday afternoon, some 67 years later, WEVL deejay — or “programmer,” in the parlance of the nonprofit volunteer radio station — Eddie Hankins became the first person in the world to play “Magnificent Hurt,” the new single from another Elvis, Elvis Costello, who was born in London seven weeks after Phillips aired that Presley acetate.

Coming 45 years into Costello’s recording career (a time span that matches WEVL’s history on air), this gesture hardly seems likely to ignite another Big Bang of rock ‘n’ roll. But the event was testimony to the former Declan Patrick MacManus’ respect for the city that was the longtime home of his professional namesake and for the idea of non-commercial radio as an incubator of music appreciation, a repository of music history and a forum for artists who aren’t always at the head of the hit parade.

“We’re going to lock ourselves in here and play it over and over again for 24 hours, like Dewey Phillips,” joked Costello, as Hankins gave “Magnificent Hurt” — a “rock and roll record,” according to Costello, propelled by the signature keen of keyboardist Steve Nieve’s Vox Continental organ — its inaugural launch into the ether, from the WEVL studio on South Main.

The record is not yet commercially available, not even online. A fan of the physical nature of what he called “real vinyl” and of the ritual of slipping a slab of plastic from its sleeve and spinning it on a turntable, Costello clearly enjoyed hand-delivering the limited-edition promotional disc to WEVL. He reminisced that at the very start of his career, when he was signed to the punkish Stiff Records label in London, “I used to go after my day job and help put vinyl records from the paper sleeves into the picture sleeves, which were sent out to the shops. It sort of felt like, ‘OK, we’re really in the business now, if we’re touching the vinyl here, this is really happening.‘”

A relatively frequent visitor to Memphis and the Mid-South region in recent years, Costello — backed by his usual band, the Imposters, plus guest guitarist Charlie Sexton — launches a roughly monthlong 21-city “Hello Again” concert tour at 8 p.m. Wednesday at the Soundstage at Graceland, the venue across the street from the Presley mansion (a landmark that Costello said he has visited “a few times”). The band has been in Memphis the past three days, rehearsing for the tour at the Memphis Magnetic Recording studio on Vance Avenue.

The show marks the second time this Elvis has performed at the home base of the other Elvis and the 12th time he has played in Memphis in the 21st century (including the 2004 shows at the old Hi-Tone on Poplar preserved on the DVD release, “Club Date — Live in Memphis”).

Due to the “Elvis” name, “I don’t know that Memphis was a place that we’d imagined we’d be welcome, early on,” Costello said, remembering that Presley’s Aug. 16, 1977, death came less than a month into Costello’s first tour with his original band, the Attractions.

“I never intended any disrespect,” he said of the “Elvis” moniker. “My managers handed me the name as a way of marking me out. I was so obviously not Elvis in appearance that it would make people stop and take notice.”

Labeled “rock’s angry young man” when he emerged as a strikingly skinny and literate wordsmith during the punk and New Wave era of the 1970s, Costello was gregarious and generous with his time during his afternoon at WEVL, chatting both on and off the air with newly COVID-tested (by mandate of the Costello management team) and virus-free WEVL personnel, photographers and a newspaper reporter — who, in fact, is also a WEVL programmer.

Full disclosure: Your reporter, who is hardly objective in this case, having eagerly attended each of the aforementioned Memphis concerts and many others through the years, is host of a 6-8 a.m. Monday morning program on WEVL-FM 89.9 called “Welcome to the Working Week,” named for the Elvis Costello song that functions as its theme song.

This week, show No. 1,475 aired, which means your reporter has heard that song more or less 1,475 times over the past (gulp) 28 years, which Costello acknowledged may represent a world record for listening to that song.

A FAN OF MEMPHIS MUSIC LEGENDS

Costello understands being a fan of music and musicians. After his on-air interview with Hankins, the Rock and Roll Hall of Famer pulled out his cellphone and shared photos of himself with such local music legends as Jerry Lee Lewis and the late Willie Mitchell, along with a video of Memphis-connected songwriter Dan Penn.

He expressed admiration for area artist after artist, citing Howlin’ Wolf, Charlie Rich, Bobby “Blue” Bland, Johnny Cash, Sonny Boy Williamson, Jim Dickinson, Deanie Parker and Al Green — “extraordinary people who went through doors in places of this size in this town,” he said, remarking that the compactness of the WEVL air room compared to the smallness of Sam Phillips’ Sun studio. He also praised the “really amazing” students of the Stax Music Academy.

Sporting a short gray beard, a soft green corduroy jacket and his usual stylish spectacles, Costello remembered that the first time his band played Memphis, in the 1980s, before Stax had been rebuilt as the Museum of American Soul Music, drummer Pete Thomas jumped the fence around the the ruins of the razed studio and “stole a brick and put it in his basement studio. He said, ‘That brick’s heard “Dock of the Bay.”’ He was convinced that it gave him a head start on the next groove.”

MAKING MUSIC DURING THE COVID-19 PANDEMIC

Costello said some of the cuts on his most recent album, “Hey Clockface” (his 31st studio record), and on his upcoming album (due for release next year) were constructed “from distance,” meaning that the musicians recorded their parts in separate cities, due to the travel difficulties posed by COVID-19. Nevertheless, “Magnificent Hurt” and other recent songs respond to the pandemic with hope and defiance rather than fear, he said.

Costello said some of the cuts on his most recent album, “Hey Clockface” (his 31st studio record), and on his upcoming album (due for release next year) were constructed “from distance,” meaning that the musicians recorded their parts in separate cities, due to the travel difficulties posed by COVID-19. Nevertheless, “Magnificent Hurt” and other recent songs respond to the pandemic with hope and defiance rather than fear, he said.