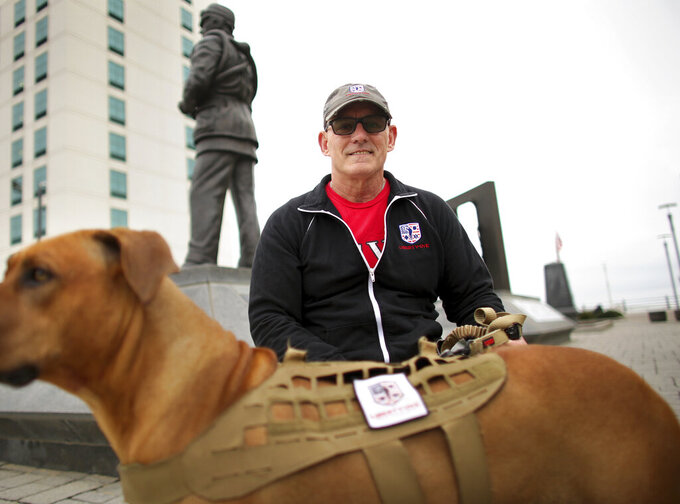 VIRGINIA BEACH, Va. (AP) — A rash of suicides tied to the USS George Washington over the past two years forced a focus on mental health services within the Navy — with congressional leaders advocating for psychological health directors at every Navy and Marine Corps installation and the Navy investigating conditions aboard Hampton Roads-based ships.

“A service member should never feel like there will be career repercussions for seeking mental health services,” said Michael Murray II, founder of Liberty-OVE.

But Murray said he has seen service members procrastinate making mental health appointments in the name of the “mission.”

“If I have one wrench-turner or one IT guy, and they are gone, that hurts,” Murray said. “We say silly things like ‘God, country, family, corps’ or ‘No one left behind’ — until a service member is absent from work due to medical appointments.”

Murray served in the Marines as an infantry officer for 19 years, deploying to Afghanistan and Iraq, before he retired in 2014 due to injuries during his service. Following his retirement, Murray founded Liberty Organization for Veterans and Emergency Responders, a nonprofit that provides post-traumatic stress treatment to active duty service members, veterans and first responders.

The National Alliance on Mental Health reported 8.4% of active duty service members were diagnosed with a behavioral health disorder in 2019. But according to a 2018 study released by the Defense Health Agency, 60-70% of military personnel with mental health symptoms do not seek professional help. Leading barriers include a fear of being seen as weak and harm to one’s career.

When service members are absent for mental or medical appointments, Murray said details of that absence are often widely disclosed, going beyond immediate supervisors, for accountability purposes. Service members may choose to reject mental health resources if they fear information about their personal situation will be shared with peers, he said.

“Patient privacy is gone,” Murray said. “For example, no one needs to know if I am having a problem with my wife and if it’s related to post-traumatic stress or alcoholism or anything else.”

According to Murray, government leaders and mental health advocates should focus on policies that protect service members as patients. Greater confidentiality could reduce the stigma of seeking mental health services.

Reps. Bobby Scott and Elaine Luria recently wrote a letter urging Secretary of the Navy Carlos Del Toro to “expeditiously appoint” psychological health directors at every Navy and Marine Corps installation, a position they said should have been filled years ago.

The letter followed six suicides in the past two years connected to the USS George Washington, which is undergoing a multi-year refueling and overhaul at Newport News Shipbuilding. Before that, five crew members on the USS George H.W. Bush died by suicide in 2019 during a three-month span while the ship was at the Norfolk Naval Shipyard.

Scott Hendrick, Liberty-OVE chief of operations, said appointing a psychological health director fails to address a bigger issue — it takes about six weeks for an active duty service member to get an appointment with a mental health professional. This wait time can be detrimental to someone seeking immediate help or appointments made that far out may not align with scheduled deployments.

“(Mental health resources) are backed up, undersourced and overworked just like most military members who serve today,” said Hendrick, who retired from a 26-year Air Force career as a chief master sergeant.

“Something has to give and unfortunately members are losing faith in the institution in which they signed an unlimited liability contract for,” Hendrick said.

Following the suicides, the Navy offered to move 260 sailors off the USS George Washington while the carrier is undergoing an overhaul, placing them in on-base housing. The Navy also staffed the Washington’s medical team with an additional clinical psychologist and a mental health clinician and provided expedited appointing for mental health referrals to sailors attached to the stationary warship.

Lawmakers also have called for more attention on service member quality of life at military installments across Hampton Roads.

But Murray and Hendrick say the government is failing to utilize local nonprofit organizations — including theirs. The Liberty-OVE treatment model addresses post-traumatic stress through a series of questions which is meant to disconnect service members’ trauma from negative emotions — a treatment that has been dubbed the “trauma recovery intervention protocol” or TRIP.

This protocol is often conducted by the organization’s clinical director, but it is designed to be run from the peer-to-peer support level, which would allow one service member to effectively help other service members.

Murray said the organization’s goal is to secure a partnership with the Department of Defense to train mental health professionals on how to conduct its trauma recovery intervention protocol during therapy sessions with service members. But the group is having trouble securing a contract and Murray said some DOD policies make it difficult to connect with local service members.

While Liberty-OVE is listed on the Department of Defense’s community resource website, the group has been told it is not allowed to pass out flyers advertising services on area military bases, including Joint Expeditionary Base Little Creek-Fort Story, because it may show preferential treatment.

A spokesperson for Joint Expeditionary Base Little Creek-Fort Story did not immediately return a request for comment on the policy.

Hendrick said in his opinion, the DOD “starts with no” rather than collaborating with other agencies and organizations to improve service members’ access to mental health resources.

“Red tape is figuratively and literally hurting our nation’s most precious resource, our military members and our veterans,” he said.