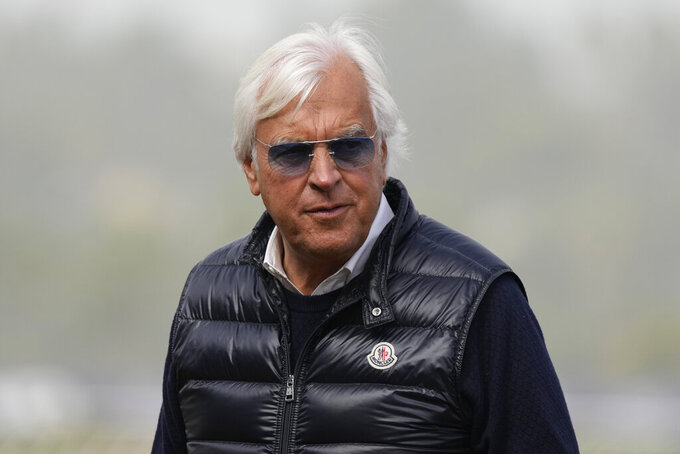 OCEANPORT, N.J. (AP) — While trainer Bob Baffert isn't welcome at every thoroughbred track around the country, Monmouth Park has no problem letting the Hall of Famer bring his horses to New Jersey.

After all, the $1 million Haskell Stakes is being run Saturday at the Jersey Shore track, and no one has dominated this first major post-Triple Crown test for 3-year-olds more than Baffert.

Baffert has won the Haskell a record nine times. He also trains Taiba, the morning-line favorite to make it 10, when he takes on seven rivals in the 1 1/8 mile race.

Baffert returned to racing earlier this month after serving a 90-day suspension handed down by the Kentucky Racing Commission related to the disqualification of Medina Spirit in the 2021 Kentucky Derby. The 69-year-old is still barred from tracks in New York and Kentucky because of suspensions issued by private industries, Churchill Downs Incorporated, and the New York Racing Association.

New Jersey only honors suspensions issued by racing stewards at individual tracks, so Baffert is welcome to train and enter horses at Monmouth.

The lightly-raced Taiba will be making his fourth career start on Saturday and only his second for Baffert. After winning a maiden special weight race, the colt was transferred to the care of Tim Yakteen — Baffert's former assistant — while Baffert was suspended. The colt won the Santa Anita Derby and then finished a disappointing 12th in the Kentucky Derby.

“I would have liked an extra week with him. But he’s doing really well," Baffert said earlier this week. "He has speed and he doesn’t get tired. The two turns won’t be a problem for him. The Kentucky Derby was a tall order for him. I don’t know what happened in the Derby. I wasn’t around. The Haskell is a great race and there are some really good horses in here. I hope the horse shows up.”

Taiba drew the No. 2 post position and will have Mike Smith in the irons. Smith and Baffert combined to win the Haskell with Authentic in 2020.

There will be plenty of competition in this race. Chad Brown's undefeated Jack Christopher is the second choice, followed by Florida Derby winner White Abarrio and Arkansas Derby winner Cyberknife.

Brad Cox, who trains Cyberknife, won last year's Haskell with Mandaloun after first-place finisher Hot Rod Charlie was disqualified for interference. Coincidently, Mandaloun later was named the Kentucky Derby winner after Medina Spirit was disqualified after post-race testing found a substance that is not allowed to be present on race day. It led to the Baffert suspension.

After finishing 18th in the Kentucky Derby at Churchill Downs, Cyberknife won the Matt Winn Stakes at the same track last month.

"I’m not sure how close I am to getting to the bottom of this horse,” Cox said. “He is a Grade 1 winner and a multiple stakes winner, and he has improved. There’s more left in the tank. We’re going to have to see the best Cyberknife in order to win this race.”