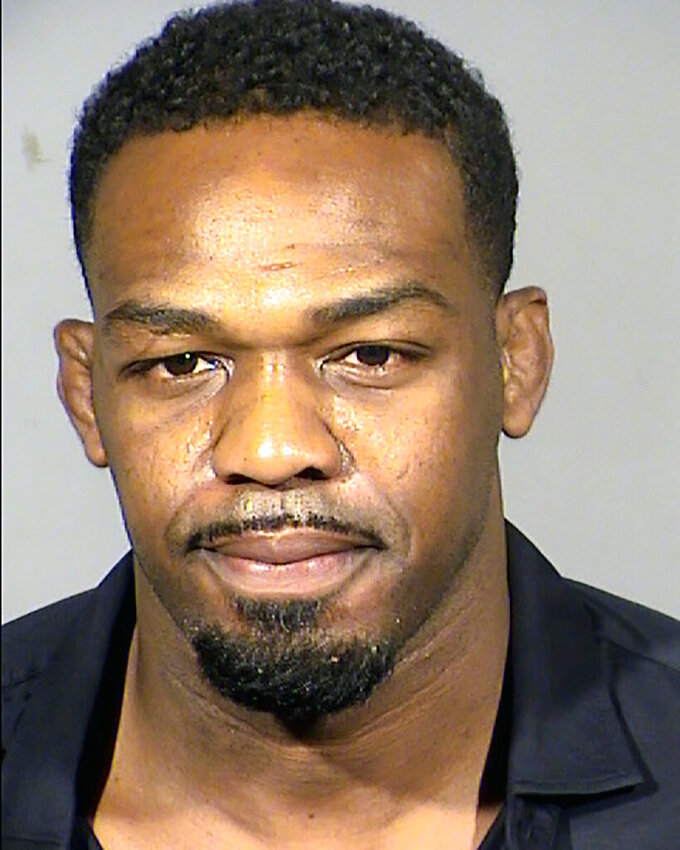 Uncredited, ASSOCIATED PRESS
This booking photo provided by Las Vegas Metropolitan Police Department shows former UFC champion Jon Jones following his arrest on Friday, Sept. 24, 2021. According to an arrest report made public Tuesday, Sept. 28, Jones dented a patrol vehicle with his head during his arrest on a domestic battery charge for allegedly grabbing his fiancée by her hair. (Clark County Detention Center via AP)

LAS VEGAS (AP) — Former UFC champion Jon Jones dented a patrol vehicle with his head during his arrest last week on a domestic battery charge for allegedly grabbing his fiancée by her hair, according to an arrest report made public Tuesday.

Jones’ fiancée left their room at Caesars Palace with the couple’s three children and police said she had apparent blood on her clothing when officers interviewed her about the pre-dawn altercation last Friday.

Jones, 34, was walking outside the Las Vegas Strip hotel when he was stopped by officers and “became irate and smashed his head onto the front hood” of the patrol SUV, leaving a medium dent and chipped paint, the report said.

The domestic battery charge is a misdemeanor. The vehicle charge is a felony, with damage reported at more than $5,000.

Court records did not reflect if Jones had an attorney.

Jones lives in Albuquerque, but attended a UFC Hall of Fame induction ceremony in Las Vegas the night before his arrest. His 2013 fight with Alexander Gustafsson was honored.

Jones (26-1, 1 no-contest) won the UFC light heavyweight championship three times from 2011 to 2020, and is widely considered one of the greatest fighters in MMA history.

His career also has been defined by misbehavior outside the cage including vehicle crashes, driving under the influence arrests and UFC discipline for testing positive for banned substances.