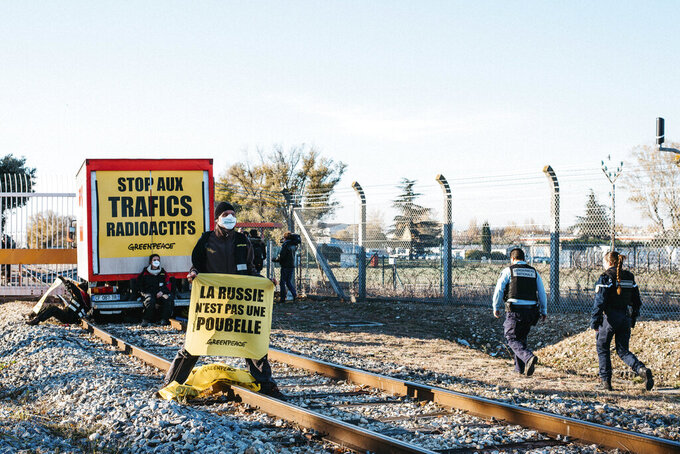 Mait Baldi, ASSOCIATED PRESS
A Greenpeace activist holds a banner with writing reading in French "Russia is not a nuclear dump" during an attempt to block a railway access in southern France where Greenpeace say a convoy of reprocessed uranium is due to leave to be exported to Russia, in Pierrelate, southern France, Tuesday, Nov. 16, 2021. The railway access is located in Pierrelatte, just outside the Orano plant where radioactive material is processed and stored. (Mait Baldi/ Greenpeace via AP)

PARIS (AP) — Six Greenpeace activists blocked a railroad in southern France on Tuesday, saying they were seeking to prevent loads of reprocessed uranium from getting exported to Russia.

The tracks the activists stood on are located in the commune of Pierrelatte just outside an Orano plant where radioactive material is processed and stored.

Orano, a multinational company headquartered in France, said Russian state nuclear firm Rosatom has a contract to buy 1,150 tons of reprocessed uranium that it plans to convert into nuclear fuel at its Seversk plant, in Siberia, and ultimately use in reactors to produce energy.

The material is set to be sent in several shipments, Orano said.

“We are deploring the lack of transparency... when it comes to what happens to nuclear waste once in Siberia," Roger Spautz, the head of Greenpeace's nuclear campaign in France, said. Any conversion of uranium in the Seversk plant “leaves at least 85% of the initial material unused” in the hands of Russia, he said in a statement.

Greenpeace wants France to handle reprocessed uranium and nuclear waste in its own territory.

The environmental group's action followed President Emmanuel Macron announcing this month that France plans to build its first new nuclear reactors in decades as part of efforts to meet its targets for reducing planet-warming emissions.

France heavily depends on nuclear energy, but its reactors are aging and its next-generation reactors are years behind schedule.

Nuclear energy produces much lower greenhouse gas emissions than coal, oil or gas, but nuclear plants are expensive to build and produce radioactive waste that remains deadly for tens of thousands of years. Politicians are divided over whether nuclear energy should be included in global plans to reduce carbon emissions.