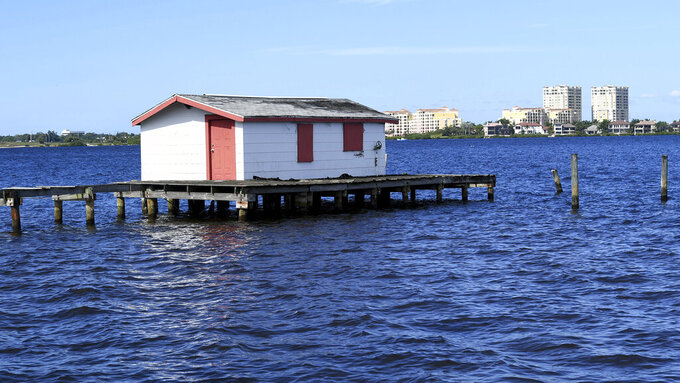 BRADENTON, Fla. (AP) — The city of Bradenton could find itself in the same seat as other local governments that have been accused of breaking federal law with repeated sewage spills.

Led by Suncoast Waterkeeper, several environmental conservation groups announced that they plan to sue Bradenton over the accidental release of millions of gallons of wastewater. Similar lawsuit threats forced several other regional municipalities into settlement agreements.

Public records detail how Sarasota County, the city of St. Petersburg and the city of Gulfport all agreed to negotiated terms after Suncoast Waterkeeper sued them over wastewater releases that allegedly broke the federal Clean Water Act.

The release of sewage into local bodies of water produces a direct negative impact on water quality, the groups said. Wastewater is high in nutrients such as nitrogen, which can fuel harmful algae blooms such as red tide.

Recently, the activists formally notified the city of their intent to sue 60 days before actually filing the complaint, as federal law requires. Speaking with the Bradenton Herald, they said they hope to resolve the issue without a drawn-out court battle.

“I would love to be able to work collaboratively with them to address the issues. I hope the city council, after becoming informed about them, would be helpful,” said Justin Bloom, founder of Suncoast Waterkeeper.

In an interview with the Bradenton Herald, City Administrator Rob Perry pushed back on the allegations that the environmental groups have launched against the city of Bradenton. He pointed to ongoing sewer improvements as proof of the city’s commitment to environmental safety.

“For years, the city has been putting money — in the millions — into replacing aged infrastructure. We continue to do that,” Perry explained. “An example is that this year there’s $2 million toward storm sewer lining and $5 million for the clarifier, so we’re constantly replacing aged infrastructure, which is a pretty common problem in Florida and across the country.”

The threatened lawsuit claims that the city of Bradenton has repeatedly violated the Clean Water Act over the past 4 years. The city’s own pollution reports show that at least 30 million gallons of raw or partially treated wastewater have spilled into the Manatee River since July 2017.

WHAT HAPPENED IN OTHER SEWAGE LAWSUITS?

Those same types of wastewater spills prompted Suncoast Waterkeeper into successful legal action against other municipalities. Most recently, Sarasota County settled a lawsuit in response to a series of spills at the Bee Ridge Wastewater Reclamation Facility.

After filing the complaint in April 2019, Suncoast Waterkeeper came up with several goals for Sarasota County to meet in order to settle the lawsuit, including the construction of an advanced wastewater treatment system by 2025, a detailed assessment of the sewer system’s deficiencies, and an agreement for Sarasota to routinely report progress on wastewater improvements.

“In Sarasota, we brought a case against Sarasota County, but we resolved that case quickly and they really focused on resolution and settlement,” Bloom said.

The court-approved settlement also instituted a fine for any future sanitary sewer overflows. As a result of any fine, Sarasota would pay money to the Sarasota Bay Estuary Program to support environmental protection projects.

“Having worked cooperatively and in good-faith to reach agreement to the stipulated order and its attachments, the parties contend that the settlement is fair, reasonable, in the public interest and consistent with the Clean Water Act,” the joint settlement agreement said.

Suncoast Waterkeeper also took legal action against St. Petersburg in 2016, which led to the city’s commitment to improving its wastewater system. Over a 5-year period, the group alleged that the city had released more than 170 million gallons of treated or partially treated wastewater.

HOW WILL BRADENTON HANDLE ITS LAWSUIT?

The city already handles spills at its wastewater treatment plant with water quality in mind, Perry said. Using equipment and machinery, the city prefers to release spills from that facility, where the sewage is usually already partially treated. That decision reduces the negative impact to the Manatee River.

Perry declined to comment on whether the city would pursue its own settlement agreement, but he noted that he looked forward to meeting with the legal team to discuss Bradenton’s upcoming sewer improvements.

“We’re going to sit down with the lawyers for sure and we’re going to try to show them what we’re doing and what the plans are moving forward to abate this, but we think any payment should go toward the abatement of these issues, instead of a lawsuit and lawyers,” Perry said.