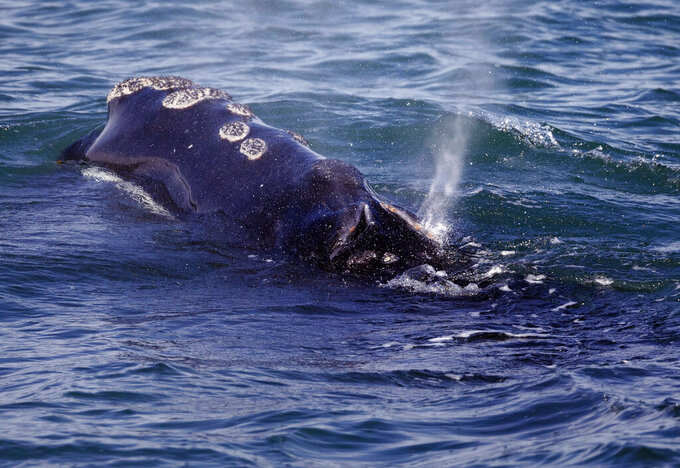 Michael Dwyer, ASSOCIATED PRESS
FILE - A North Atlantic right whale feeds on the surface of Cape Cod bay off the coast of Plymouth, Mass., March 28, 2018. A federal circuit court has on Tuesday, July 12, 2022 reinstated a ban on lobster fishing gear in a nearly 1,000-square-mile area off New England to try to protect endangered whales. The National Marine Fisheries Service issued new regulations last year that prohibited lobster fishing with vertical buoy lines in part of the fall and winter in the area, which is in federal waters off Maine's coast. (AP Photo/Michael Dwyer, File)

PORTLAND, Maine (AP) — A federal circuit court has reinstated a ban on lobster fishing gear in a nearly 1,000-square-mile area off New England to try to protect endangered whales.

The National Marine Fisheries Service issued new regulations last year that prohibited lobster fishing with vertical buoy lines in part of the fall and winter in the area, which is in federal waters off Maine's coast. The ruling was intended to prevent North Atlantic right whales, which number less than 340, from becoming entangled in the lines.

The U.S. District Court for the District of Maine issued a preliminary injunction to halt enforcement of the rules. The U.S. Court of Appeals for the First Circuit in Boston vacated that ruling Tuesday.

The circuit court sent the case back to the district court level, but noted in its ruling that it does not think the lobster fishing groups that sued to stop the regulations are likely to succeed because Congress has clearly instructed the fisheries service to protect the whales.

“Although this does not mean the balance will always come out on the side of an endangered marine mammal, it does leave plaintiffs beating against the tide, with no more success than they had before,” the court ruled.

The ruling was the second by a federal court in favor of right whale protection in the past week. A U.S. District judge ruled last week that the federal government hasn’t done enough to protect the whales from entanglement in lobster fishing gear, which can be lethal, and new rules are needed to protect the species from extinction.

The whales feed off New England and Canada and migrate to waters off Georgia and Florida to give birth. They were decimated during the commercial whaling era and are vulnerable to entanglement in gear and collisions with ships.

Commercial fishing groups have filed lawsuits about new rules designed to protect the whales because of concerns that the regulations will make it impossible to sustain the lobster fishing industry. The industry, based mostly in Maine, is one of the most valuable in the U.S., worth more than $500 million at the docks in 2020, according to the National Oceanic and Atmospheric Administration.

A union of lobstermen, two lobster fishing companies and an individual lobster fisherman filed the legal challenge against the restriction of vertical buoy lines. The Tuesday ruling "is a distressing setback for the several hundred lobstermen who fish in that area," said Patrice McCarron, executive director of the Maine Lobstermen's Association, an industry group.

Conservation groups have called for tighter laws. Tuesday's ruling is “a lifesaving decision for these beautiful, vulnerable whales,” said Kristen Monsell, an attorney at the Center for Biological Diversity who argued the case at the circuit court.