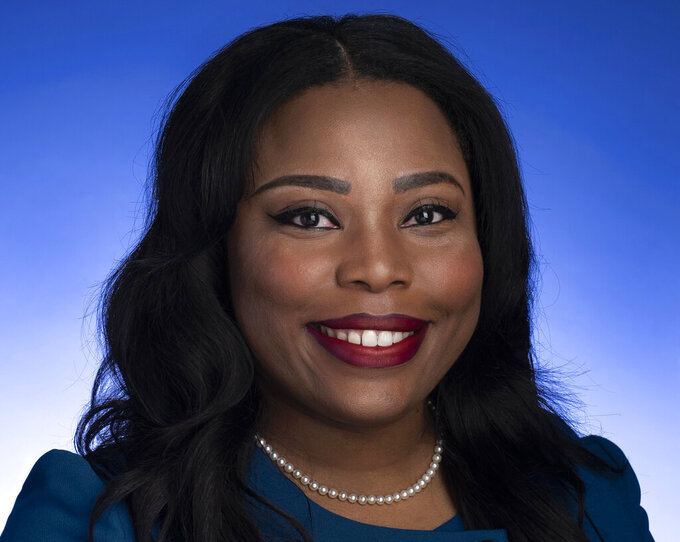 MEMPHIS, Tenn. (AP) — A jury on Thursday convicted a Tennessee state senator charged with using federal grant money awarded to a health care school she operated on her wedding, a political campaign event and other personal expenses.

A 12-person federal jury decided state Sen. Katrina Robinson was guilty of four of five counts of wire fraud. Robinson already had been acquitted by a judge on 15 of 20 charges sought by federal prosecutors in Memphis, where Robinson’s school for health care workers is located. The monetary total of the original charges alleged she stole more than $600,000, but after the majority of charges were acquitted, the total was about $3,400.

Robinson, a Memphis Democrat elected to the Tennessee General Assembly in 2018, was charged in July 2020 with wire fraud as well as theft and embezzlement involving government programs after the FBI searched the school and her home.

The school received more than $2.2 million in federal grants from the Health Resources and Services Administration, an agency of the U.S. Department of Health and Human Services. The federal grant money was earmarked for student scholarships from 2015 through 2019.

“I entered this process knowing that I am innocent and still I maintain that I am innocent,” Robinson told reporters shortly after the conviction. Her attorneys added that they would ask the judge for a reconsideration or to file a motion for a new trial.

Republican Lt. Gov. Randy McNally, who leads the Senate, on Thursday called for Robinson to resign.

“While Senator Robinson’s convictions did not stem from actions taken while in office, they are nevertheless very serious," McNally said in a statement. "As public servants, we are held to a higher standard. My personal opinion is that it would be in the best interest of the state and her constituents for Senator Robinson to step down at this time.”

Robinson said that she had not decided whether she would resign.

“My service to the state Senate; I'm still committed to that,” she said. “However, I have not yet made a decision about how we move forward.”

During the trial, prosecutors attempted to prove Robinson used more than $600,000 in grant money to pay for personal expenses such as her wedding and honeymoon, a Jeep Renegade for her daughter, travel and entertainment for her family, a snow cone business for her children and an event for her state Senate campaign. Prosecutors referenced financial documents and FBI agents testified during the trial, which began Sept. 13.

Defense attorneys countered, arguing Robinson did not use government funds to pay for personal expenses. Rather, Robinson used profits generated from tuition payments to the Memphis school and other income, her lawyers said.

Robinson had maintained her innocence since she was indicted, and she took the stand in her defense. Robinson, who is also a nurse and a single mother of two, was questioned about the school’s expenses, student enrollment and scholarships.

Jonathan Mattise and Kimberlee Kruesi in Nashville, Tennessee, contributed to this report.