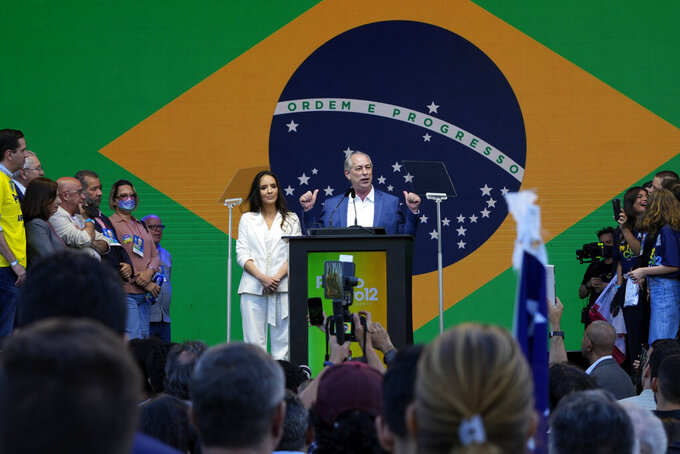 RIO DE JANEIRO (AP) — Leftist Brazilian politician Ciro Gomes made his presidential candidacy official at an event in capital of Brasilia on Wednesday, less than three months before the election.

Gomes' chances of winning the election appear slim, with just 8% of respondents saying they plan to vote for him in October, according to the latest Datafolha poll conducted in June. He trails far behind former President Luiz Inácio Lula da Silva, of the Workers’ Party, and far-right President Jair Bolsonaro, who accounted for 47% and 28% of intended votes, respectively, according to the same poll, which had a margin for error of plus-or-minus 2 percentage points.

Gomes, a politician from Brazil's northeast region, is the candidate for the Democratic Labor Party, and his candidacy is expected to put a dent in da Silva's support during the first round of the election. He has sought to cast himself as an alternative to Brazil's polarization embodied by the two-horse race between da Silva and Bolsonaro.

Gomes lambasted Bolsonaro for his poor handling of the pandemic, the rise in food insecurity and recurring threats to democracy, but said he was only able to come to power because of the leftist Workers' Party, in power between 2003 and 2016.

“Bolsonaro is also the effect of an economic model and a corrupt school of government, which led the country with very few highs and very many lows to a tragedy foretold,” Gomes told a cheering crowd at Wednesday’s event. “A model so improvised and misleading that it gradually dissatisfied everyone and fueled frustrations and resentments in various strata of society.”

Gomes was governor of Ceara state in the mid-1990s and has run for president three times, most recently in 2018 against then-candidate Bolsonaro. After losing the first round, he declined to endorse the Workers’ Party's candidate in the runoff.

The deadline to make candidacies official is Aug. 5.