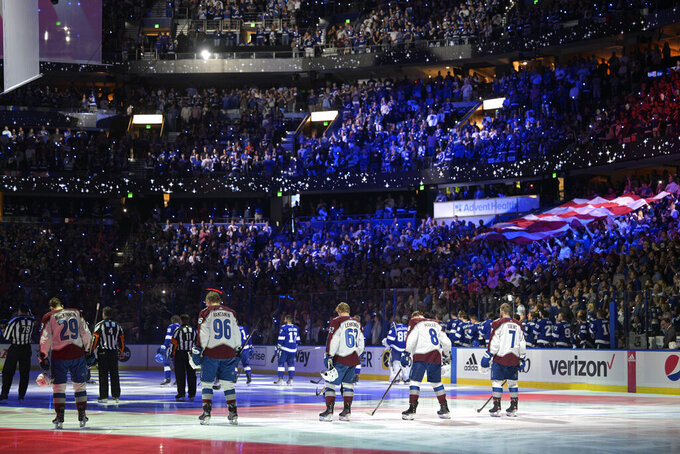 Phelan Ebenhack, ASSOCIATED PRESS
The Colorado Avalanche and the Tampa Bay Lightning stand during the national anthem before the first period of Game 4 of the NHL hockey Stanley Cup Finals on Wednesday, June 22, 2022, in Tampa, Fla. (AP Photo/Phelan Ebenhack)

One of the biggest stories in the NHL this season has been the increase in viewers in the league's first year of its television contracts with ESPN and TNT. The league is also seeing unparalleled growth in female and younger fans that should have a big impact for years to come.

According to NHL research, 37% of hockey fans are female, including an eye-popping 26% growth in that demographic since 2016. Most of those new fans are likely within the coveted 18-49 age demographic, too, since nearly 40% of all NHL fans are under 50.

Kali Mick — an Avalanche fan who lives in Colorado and is part of the league's Power Players youth advisory board — said the recent growth comes as the league has showcased more of the human side of the game.

“We’re seeing more player interviews, family moments and those heartfelt things that happen off the ice, as well as this mix of the great highlights that we’re also seeing.,” she said. “That’s been really great to help get more people in the game because people who don’t know the sport will connect more with the human moments. And then the highlights will keep their attention.”

The increase among female viewers was higher during Wednesday night games on TNT. During the regular season, there was a 44% jump in female viewers compared to previous years, when the games were aired on NBCSN.

“Not only do we want to give our avid fans the content that they love, but how can we share it with casual and new fans and make sure that they feel welcome,” said Heidi Browning, the NHL's senior executive vice president and top marketing officer.

The effort to grow connections has include social media. The league formed a content partnership with TikTok while the agreement with Turner led to Bleacher Report expanding its coverage and the B/R Open Ice vertical. Bleacher Report's hockey site posted its most viewed month (35.8 million page views) in May and saw engagement triple compared to last year.

Browning is also pleased with the NHL's share of young fans. League research found that 80% of the users on its digital channels are Gen Z and millennial. The Power Players board, created in 2019, seeks the opinions of fans and social influencers ages 13-17.

Aidan Gunn, who is also part of the board, pointed to the changes in marketing for the growth.

“They’ve taken a less professional approach to their marketing. And I mean that in the best way possible. It’s so much more personal,” he said. "I truly believe that social media is basically an elevator pitch, you have two seconds to capture somebody’s attention. And I think (in) the NHL that’s entirely reflected in their marketing strategy recently. They’ve done so much better with sprucing up all of their content."

Mick said of the things she has noticed from the board's recommendations is more activity on TikTok showing things like the players walking into the arena, in the same way the pregame fashion choices have increased traffic on NBA and NFL sites.

The growth in younger fans should also lead to increased revenue in future seasons. Commissioner Gary Bettman said revenue should be in excess of $5.2 billion for this year. While the off-ice stories have helped, Bettman continues to stress it is also about the product on the ice.

“The growth and interest starts with the game,” said Bettman before the start of the Stanley Cup Final.

The NHL's efforts got a bonus Friday night as the final was pushed to Game 6 on Sunday night, where Tampa Bay will host Colorado and try to force a deciding Game 7 in its three-peat championship bid.