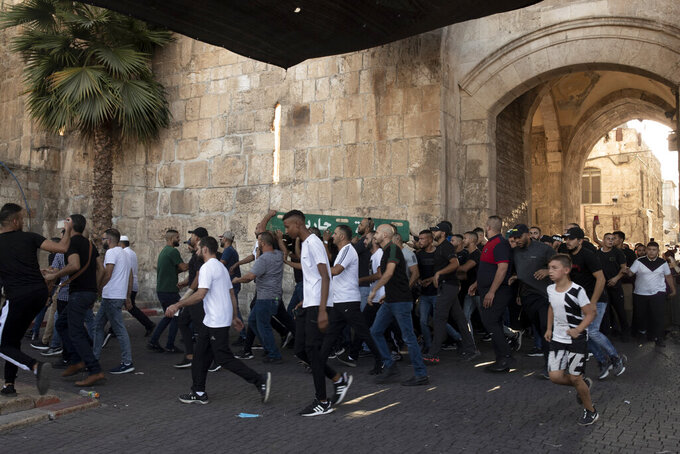 Maya Alleruzzo, ASSOCIATED PRESS
Palestinian protesters march into the Al Aqsa Mosque compound in the Old City of Jerusalem, Friday, Sept. 10, 2021. Amid increased Israeli-Palestinian tension over a recent prison break, Israeli police said an officer was lightly injured by a firearm in an attempt to thwart a suspected stabbing attack in the area. The Police, which arrested the suspect, did not immediately say how the officer was injured. (AP Photo/Maya Alleruzzo)

JERUSALEM (AP) — Israeli police on Saturday said they have arrested four of the six Palestinians who broke out of a maximum-security prison this week — including a famed militant leader whose exploits over the years have made him a well-known figure in Israel.

Late on Saturday, the four re-captured prisoners appeared separately in court where prosecutors are pushing terrorist attack charges against them following their escape.

The arrests moved Israel closer to closing an embarrassing episode that exposed deep flaws in its prison system and turned the fugitive prisoners into Palestinian heroes. Late on Friday, Palestinian militants in the Gaza Strip fired a rocket into Israel in an apparent sign of solidarity, drawing Israeli airstrikes in reprisal.

The four wanted men were caught in a pair of arrests in northern Israel.

Early on Saturday, police said they had caught two men, including Zakaria Zubeidi, hiding in a truck parking lot in the Arab town of Umm al-Ghanam.

The Israeli Haaretz news site, quoting an unidentified defense official, said Zubeidi and fellow fugitive Mohammed Aradeh had been hiding outdoors for some time. The source said the two escapees appeared to have received no help following their escape and had no planned route on where to go.

Zubeidi was a militant leader during the second Palestinian uprising in the early 2000s.

While he has been linked to attacks on Israelis, he also was well known for giving frequent media interviews and for a friendship he once had with an Israeli woman. Zubeidi over the years had received amnesty and taken college courses and was active in a West Bank theater movement before he was re-arrested in 2019 on suspicions of involvement in attacks.

Photos released by police showed Zubeidi, handcuffed and wearing a white head band, being led away by two police officers.

In a statement, police said that Israeli security forces, including the military, have been working “around the clock” to catch the fugitives.

“All of the forces were deployed at full strength, searched in open areas, collected every piece of information until they succeeded in solving the puzzle to locate these two fugitives," including Zubeidi, police said. The search for the final two prisoners was continuing.

Earlier, two other prisoners were arrested in Nazareth, an Arab city in northern Israel just west of Umm al-Ghanam.

A video circulating on social media showed Israeli police shackling one of the prisoners, Yakub Kadari, into the backseat of a police vehicle and asking him for his name. The man, wearing jeans and a green T-shirt, calmly identifies himself as Kadari and answers “yes” when asked whether he is one of the escapees. Kadari was serving two life sentences for attempted murder and bomb planting.

According to Israeli media reports, local residents in both towns had turned in the prisoners.

In a statement issued late Saturday, Israel's Prime Minister, Naftali Bennett, praised the Israeli security forces for the arrest of the four fugitives, describing the search operation as “determined and persistent.”

“We have to maintain heightened readiness and continue until the mission is complete,” Bennett said.

In Gaza, Hamas’ armed wing pledged to include the six prisoners on the top of any future prisoner swap deal between the militant group and Israel.

“The heroes of the ‘freedom tunnel’ will come out with heads held high and the Qassam command has decided that there will be no exchange deal without freeing those heroes,” said the spokesman, Abu Obaida, using the name of Hamas' military wing.

Hamas is believed to be holding two Israeli civilians and the remains of two Israeli soldiers who were killed during the 50-day Gaza war between the two sides in 2014. There have been no serious negotiations on brokering a swap. In 2011, Israel retrieved a soldier who had been kidnapped and held for five years by Hamas in exchange for over 1,000 Palestinian prisoners.

The six Palestinians tunneled out of the Gilboa prison on Monday, setting off a furious manhunt across Israel and in the West Bank.

For the Palestinians, the fugitives won praise for succeeding in freeing themselves from multiple life sentences. Fighting against Israel and taking part in attacks against the Israeli military or even civilians is a source of pride for many, and Palestinians consider prisoners held by Israel to be heroes of their national cause.

In the Gaza Strip as well as in the West Bank, Palestinians had organized sit-ins and joyful gatherings to celebrate the prison break.

While Zubeidi was a member of the secular Fatah group, the others belonged to the Islamic Jihad militant group, including four serving life sentences. All of the prisoners are from the nearby city of Jenin in the Israel-occupied West Bank.

As soon as the news about the capture of the two fugitives was confirmed Friday, a flurry of bitter posts expressing disappointment and shock filled Palestinian social media.

Israel said late Saturday that Palestinian militants in Gaza fired a rocket toward Israel that was intercepted by Israeli air defenses. The Israeli military said it responded with airstrikes on a series of Hamas targets in Gaza. Israel says it holds Hamas, which has ruled Gaza since 2007, responsible for all rocket fire emanating from the territory.

There was no immediate reaction from the Palestinian Authority, but Abdeltaif al-Qanou, a spokesman for the Gaza-ruling Hamas movement, said despite the re-arrest, the prisoners have “scored a victory and harmed the prestige of the Israeli security system.”

The escape has exposed major flaws in Israel’s prison service and set off days of angry criticism and finger-pointing. The men escaped through a hole in the floor of their shared cell, tunneled through a hole outside the prison and according to media reports, escaped past a sleeping prison guard.

It has also increased tension between Israel and the Palestinians.

Earlier on Friday, Hamas had called for “a day of rage” to protest Israeli crackdown against imprisoned Palestinians, but the day passed without major confrontation. In Jerusalem, a Palestinian suspected attacker died shortly after being shot by Israeli police in the volatile Old City, where he had reportedly tried to stab officers. Police said one officer was lightly wounded in the leg.