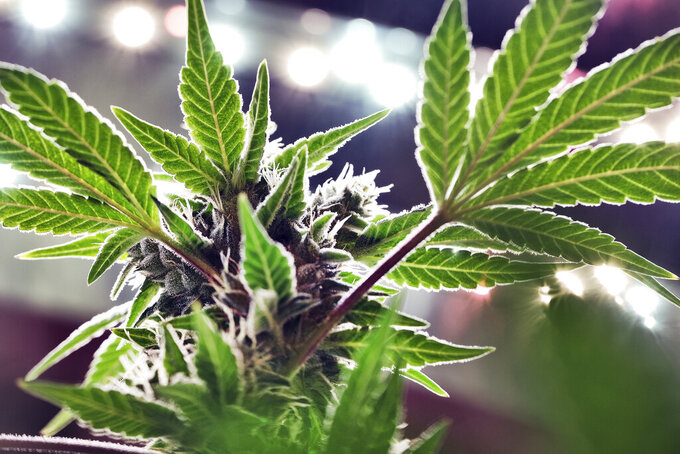 Richard Vogel, ASSOCIATED PRESS
FILE - This May 20, 2019, file photo shows a mature marijuana plant beginning to bloom under artificial lights at Loving Kindness Farms in Gardena, Calif. A cash management company is asking a federal court to return nearly $166,000 in proceeds from sales at Missouri medical marijuana stores that was seized in Kansas. The Dickinson County, Kansas, sheriff's office seized the money in May, 2021, as it was being driven through Kansas to Colorado. Medical marijuana is legal in Missouri and Colorado; but the use of marijuana is illegal in Kansas. (AP Photo/Richard Vogel, File)

Dickinson County sheriff's deputies seized the money in May after stopping a driver for Empyreal Logistics as she was taking the proceeds to Colorado. Medical marijuana is legal in Missouri and Colorado, which also allows recreational use. Marijuana use is illegal in Kansas.

Federal prosecutors say the money is subject to forfeiture because it violates a federal law against manufacturing and distributing drugs. The U.S. Attorney's office in Kansas filed a civil forfeiture action in federal court seeking to seize the money.

A federal magistrate judge ruled last month that there was probable cause to seize the money in Dickinson County because it was the product of illegal drug sales. A hearing is scheduled for Jan. 4.

According to federal court filings, Empyreal is arguing the money was obtained through legal transactions.

A driver for Empyreal was stopped for a traffic violation in Dickinson County on May 17 on Interstate 70 near Abilene. The driver, who has not been charged, told the deputy she was going to Kansas City, Missouri, to pick up cash from medical marijuana dispensaries, according to court records.

While in Kansas City, the driver was watched by agents with the federal Drug Enforcement Agency as she entered several dispensaries, according to court records. On her way back to Denver, she was again stopped by a Dickinson County, Kansas, sheriff's deputy for an unstated reason.

In a federal affidavit, DEA special agent Bryson Wheeler wrote that about $165,620 was seized after a drug-sniffing dog reacted to the smell of marijuana on the cash, The Topeka Capital-Journal reported.

Jan Douglass, an attorney with Denver-based Cantafio Nagel & Song, which represents marijuana businesses, said the federal case is perplexing because it involves seizing proceeds from legal marijuana transactions, rather than seizing the drug itself, KCUR reported.

“So you’re prohibiting the transport of legitimate funds that were acquired in one state — and we’re not talking products here but the results of a legal, reportable, taxable transaction that’s being seized by another state,” Douglass said.

Danielle Thomas, a spokesperson for the U.S. Attorney’s office in Kansas, said the office does not comment on pending litigation.

Empyreal argued in a court filing that the federal government's claims to the money should be denied.

“There is no evidence that the Subject Currency was furnished or intended to be furnished in exchange for an unlawful controlled substance in violation of the Controlled Substances Act. … Said currency was derived from lawful activity,” an attorney for the company argued.