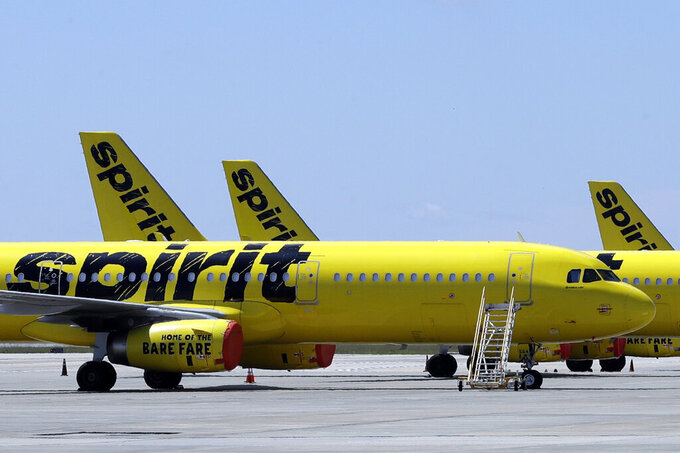 Chris O'Meara, ASSOCIATED PRESS
FLE - A line of Spirit Airlines jets sit on the tarmac at the Orlando International Airport on May 20, 2020, in Orlando, Fla. Shareholders of Spirit Airlines will vote Thursday, June 29, 2022, on a proposed merger with Frontier Airlines, and the outcome could affect fares for millions of air travelers who depend on the budget airlines. (AP Photo/Chris O'Meara, File)

NEW YORK (AP) — Shares of Spirit Airlines rose Thursday after it postponed a vote for the second time on a proposed merger with Frontier Airlines, allowing for a bidding war over the budget airline between Frontier and JetBlue Airways to play out.

The delay, announced hours before the scheduled vote, indicated that Spirit lacked support to approve the Frontier merger.

JetBlue CEO Robin Hayes said Spirit shareholders gave their board a mandate to negotiate a sale to his airline.

But JetBlue investors seemed underwhelmed by the prospect of the New York-based carrier buying Spirit. They sent shares of JetBlue down 6.6% on Thursday. Spirit rose 6.4%, while Frontier dipped 1.5%.

Florida-based Spirit said the vote on a proposed tie-up with Frontier would be postponed until July 8. Leaders of all three airlines have been making their pitch to major Spirit shareholders for support in a vote that could reshape the market for travelers looking for the cheapest possible fare.

Spirit's board has stood by a February agreement with Frontier despite pressure from JetBlue.

The vote on the Frontier deal was originally scheduled for June 10, but was postponed nearly three weeks in what analysts took as a sign that Spirit lacked support for the merger in the face of an all-cash offer from JetBlue.

Both sides have sweetened their offers since early June. At current stock prices, the Frontier bid is worth about $22 per share, or $2.4 billion, while JetBlue's hostile takeover bid is $33.50 per share, or $3.6 billion.

Spirit and Frontier argue that antitrust regulators will prefer their combination of two similar budget airlines and won't let a bigger carrier like JetBlue buy Spirit. JetBlue says it can win government approval, and it has offered to divest some Spirit assets.

Either deal would create the fifth-largest U.S. airline and a more powerful competitor to giants American, United, Delta and Southwest.