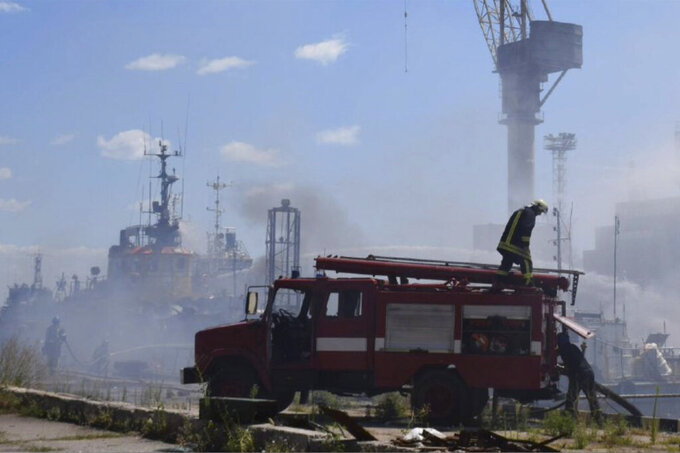 Efrem Lukatsky, ASSOCIATED PRESS
In this photo provided by the Odesa City Hall Press Office, firefighters put out a fire in the port after a Russian missiles attack in Odesa, Ukraine, Saturday, June 5, 2022. Russian missiles have struck Ukraine’s Black Sea port of Odesa just hours after Moscow and Kyiv signed deals to allow grain exports to resume from there. (Odesa City Hall Press Office via AP)

UNITED NATIONS (AP) — The U.N. Security Council has been unable to agree on a statement welcoming last week’s deal to get grain and fertilizer moving from Ukraine and Russia to millions of hungry people around the world, Norway's U.N. ambassador said Wednesday.

The statement also would have commended Secretary-General Antonio Guterres and Turkey’s government for their key roles in arrranging the agreement.

“Norway and Mexico have been working for days to unify the council in one message welcoming the significant deal to resume exports of grains, foodstuffs and fertilizers through the Black Sea,” Norwegian Ambassador Mona Juul told The Associated Press. “We regret that this was not possible.”

Russia and Ukraine signed separate agreements Friday with Turkey and the U.N. clearing the way for Ukraine — one of the world’s key breadbaskets — to export 22 million tons of grain and other agricultural goods that have been stuck in Black Sea ports because of Russia's invasion.

The deal also aims to ensure that Russian food and fertilizer have unrestricted access to world markets.

Guterres described the deal as an unprecedented agreement between two parties engaged in a bloody conflict and called it “a beacon of hope” for millions of hungry people who have faced huge increases in the price of food.

A day after the signing, Russia staged an airstrike on the Ukrainian port of Odesa, one of three ports named in the deal for exporting grain. Under the agreement, Kyiv and Moscow agreed not to target vessels and port facilities involved in the initiative.

Guterres “unequivocally” condemned the reported airstrikes in Odesa, citing the commitments made by the parties at the signing ceremony in Istanbul, according to a statement from the U.N. spokesman. The U.N. chief stressed that full implementation of the agreements by Russia, Ukraine and Turkey “is imperative," the U.N. spokesman said.

Council diplomats said Russia objected to the last draft statement on the grain deal because it mentioned Guterres’ condemnation of Saturday’s airstrike.

The proposed statement from Norway and Mexico, obtained by AP, would have welcomed the progress at Friday’s signing of the deal “towards ensuring the safe and secure export of grains, foodstuffs and fertilizers from Ukraine and the Russian Federation.”

It would have commended Guterres and Turkey and called for swift implementation of commitments made in Istanbul.

“A unified statement from the council welcoming the deal and commending the secretary-general for his efforts would have been an important signal,” Juul said.

“Norway believes the personal efforts and engagement of the secretary-general has been essential in facilitating negotiations between the parties,” Juul said. “These efforts are more important than ever, as the effects of the war continue to be felt by the people of Ukraine and beyond.”