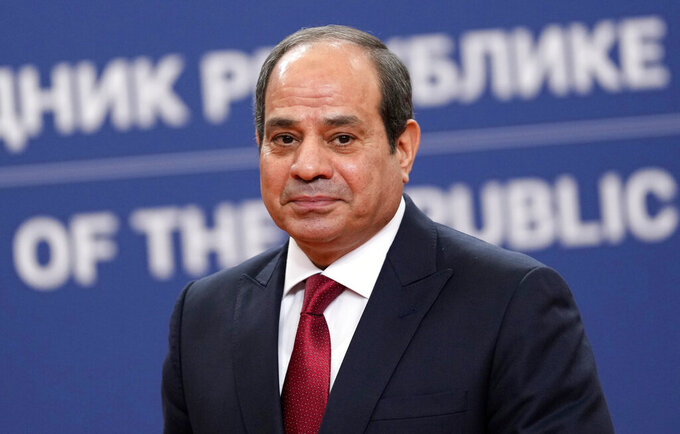 Darko Vojinovic, ASSOCIATED PRESS
FILE - Egyptian President Abdel Fattah el-Sisi looks on during a press conference after talks with his Serbian counterpart Aleksandar Vucic at the Serbia Palace in Belgrade, Serbia, July 20, 2022. The Biden administration said Wednesday, Sept. 14, that it will again give Egypt much of a $300 million tranche of annual military aid to that country that's conditioned on human rights improvements, saying the U.S. ally had made progress by releasing some 500 of its estimated 60,000 political prisoners. (AP Photo/Darko Vojinovic, File)

WASHINGTON (AP) — The Biden administration said Wednesday it will again give Egypt much of a $300 million tranche of annual military aid that's conditioned on human rights improvements, saying the U.S. ally had made progress by releasing some 500 of its estimated 60,000 political prisoners.

Rights groups and some U.S. lawmakers have urged the administration to withhold the full $300 million from Egypt, whose security forces and prisons are notorious for detention, torture and disappearances of democracy and rights activists, journalists, writers, political figures and others.

Senior U.S. officials, speaking on condition they not be identified to discuss details of the administration's decision-making, disclosed the move by Secretary of State Antony Blinken.

Congress has made U.S. payment of $300 million of the more than $1 billion Egypt receives in U.S. military aid contingent on President Abdel Fattah el-Sisi making progress on his government's poor record for political imprisonment and human rights. Administrations are able to waive that requirement for part of the $300 million.

Congress's conditioning of some of Egypt's aid makes for an annual public test of the Biden administration's balancing of strategic interests and human rights. President Joe Biden had vowed to put human rights and American values at the core of his administration's foreign policy.

As in the previous year, Blinken has informed Egypt that the U.S. would withhold $130 million of that aid but provide $170 million under the waiver, officials said.

The officials cited release of some 500 political detainees and what they said were Egyptian government efforts on fostering national dialogue.

Sen. Chris Murphy, D-Conn., a member of the Senate Foreign Relations Committee, had taken to the Senate floor this week to urge the administration to withhold the full $300 million. Murphy cited the case of the Egyptian father of one of his constituents, who Murphy said had been raped and subjected to electric shock and other abuse while imprisoned for his work to document rights abuses in Egypt.

“Every day that we continue to send billions of dollars to the Egyptian government, while paying lip service to these egregious human rights violations, it is a blow both to our nation’s character and to our credibility around the world,” Murphy said in one of his pleas, which were made before the State Department decision was announced.

While freeing the several hundred prisoners, Egypt under the military-backed el-Sisi has had to build 60 detention centers over the past decade, Murphy said, to house what rights groups consistently estimate is 60,000 political prisoners nationally.

Under federal law, the secretary of state must certify that Egypt is meeting the congressionally set conditions on human rights and political prisoners or issue a waiver.

The department said Blinken was unable to certify compliance on the human rights front other than with regard to political imprisonment.

Egypt is one of just two Arab nations — the other is Jordan — that once went to war with Israel but have since signed a peace treaty with that country. The U.S., in support of those peace agreements, has provided billions of dollars in military aid to Egypt since its 1978 peace treaty.

Under Sisi, Egypt has seen the heaviest crackdown on dissent in its modern history. Officials have targeted not only Islamist political opponents but also pro-democracy activists, journalists and online critics. Lengthy pretrial detentions have become a common practice to keep the government’s critics behind bars for as long as possible.