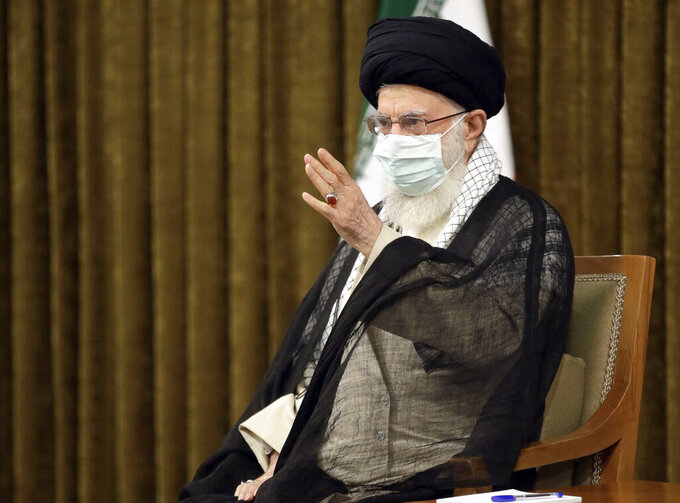 Supreme Leader Ayatollah Ali Khamenei’s remarks come as his hard-line protege, President-elect Ebrahim Raisi, is poised to be sworn in next week as the head of the country’s civilian government.

While Raisi has said he wants to return to the tattered nuclear deal, which saw Iran limit its enrichment of uranium in exchange for the lifting of economic sanctions, Khamenei seemingly called for a more adversarial approach in his remarks. The supreme leader also appeared to describe outgoing President Hassan Rouhani’s eight-year government as naive for its approach in reaching the 2015 agreement — even as Rouhani and his Cabinet sat before him in a farewell meeting.

“Others should use your experiences. This experience is a distrust of the West,” Khamenei said in remarks broadcast by state television. “In this government, it was shown up that trust in the West does not work.”

He added: “Westerners do not help us, they hit wherever they can."

In Washington, the State Department said the U.S. is being “sincere and steadfast in pursuing a path of meaningful diplomacy” in the nuclear deal negotiations, but blamed Iran for the impasse in Vienna.

“We have made clear that we are prepared to return to Vienna to resume negotiations. The same could not be said of Iran,” the U.S. statement said. “No amount of deflection can obscure that. We urge Iran to return to the negotiations soon so that we can seek to conclude this deal.”

The statement added: “That opportunity will not last forever.”

“Through its actions, Iran continues to exacerbate the nuclear situation,” she said. “If it continues down this path, ... it could compromise the very possibility of concluding the Vienna talks and restoring the” deal.

In his remarks Wednesday, Khamenei described American negotiators as verbally promising to lift sanctions, but said any return to the nuclear deal must “include a sentence” on negotiating on other issues.

“By putting this sentence, they want to provide an excuse for their further interventions on the principle of (the deal) and missile program and regional issues," the leader said. "If Iran refuses to discuss them, they will say that you have violated the agreement and the agreement is over.”

Rouhani sat off to the side at Khamenei's office during the meeting along with his senior vice president, while officials in his government sat before the supreme leader in socially distanced chairs amid the country's raging coronavirus outbreak. All wore masks, making it difficult to see their expressions as Khamenei criticized any outreach to the West while only praising “some” of the country's diplomats in front of Iranian Foreign Minister Mohammad Javad Zarif.

“Westerners do not help us, they hit wherever they can,” Khamenei said. He also said at another point: ”They don’t help, they are enemies."

Under the deal, Iran agreed to limit its enrichment of uranium gas to just 3.67% purity, which can be used in nuclear power plants but is far below weapons-grade levels of 90%. It also put a hard cap on Iran’s uranium stockpile to just 300 kilograms (661 pounds). Tehran also committed to using only 5,060 of its first-generation centrifuges, the devices that spin the uranium gas to enrich it.

Then-President Donald Trump unilaterally withdrew America from the accord in 2018. Today, Iran has broken all the limits it agreed to under the deal. It now enriches small amounts of uranium up to 63% purity, its highest level ever. It also spins far-more advanced centrifuges and more of them than allowed under the accord, worrying nuclear nonproliferation experts, though Tehran insists its program is peaceful.

Trump said he withdrew from the deal over Iran's ballistic missile program, as well as its support for regional militias like the Lebanese Hezbollah and Yemen's Houthi rebels. Biden's administration has said it seeks a “longer and stronger” deal, possibly involving those issues given Khamenei's comments.

Tensions over the nuclear deal's collapse have spilled across the wider Middle East in the form of attacks and sabotage. Meanwhile, Iran's already ailing economy has further suffered, leading to the drastic devaluation of its rial currency and fueling protests.

Those protests have renewed attention by the government on social media in the country, as foreign-based apps like Facebook's Instagram and WhatsApp have helped spread videos of the demonstrations.

On Wednesday, Iran's parliament agreed to discuss a bill requiring social media companies to have an office in Iran and be registered with the government. Failing to do so would see them banned by authorities. The bill also takes control of the internet away from the civilian government and places it under the armed forces.

State Department spokesman Ned Price urged Iran “to allow its citizens to exercise their right to freedom of expression and to freely access information, including via the internet” amid the protests.

“The Iranian people are now putting a spotlight not only on their unmet needs, but also their unfulfilled aspirations for respect for human rights,” Price said.