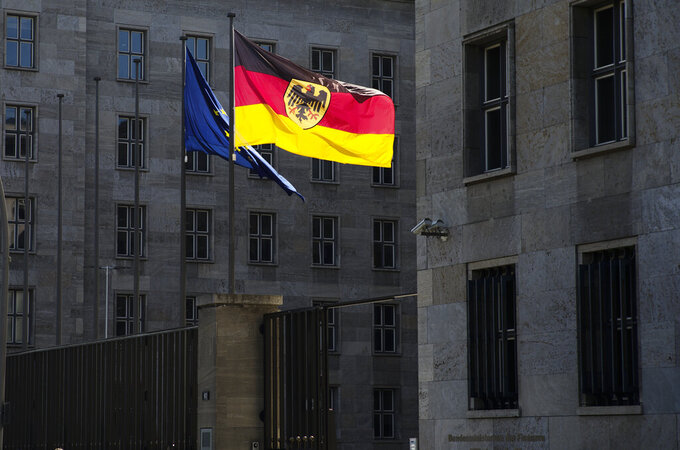 Markus Schreiber, ASSOCIATED PRESS
The German and European flag waves in front of German Finance Ministry in Berlin, Germany, Thursday, Sept. 9, 2021. Investigators have carried out searches at the German finance and justice ministries in a probe of suspected obstruction of justice by employees of a unit of the country's customs service that fights money laundering. Word of the searches come just over two weeks ahead of a parliamentary election in which Finance Minister Olaf Scholz is running for chancellor. (AP Photo/Markus Schreiber)

BERLIN (AP) — Investigators carried out searches at the German finance and justice ministries on Thursday in a probe of suspected obstruction of justice by employees of a unit of the country's customs service that fights money laundering.

The searches come just over two weeks ahead of a parliamentary election in which Finance Minister Olaf Scholz is running for chancellor, and his center-left Social Democrats are leading polls. The justice minister is also a member of his party.

Prosecutors in the western city of Osnabrueck said they have been investigating since last year because indications of possible money laundering from banks to the Financial Intelligence Unit, or FIU, weren't passed on to police and judicial authorities.

They said in a statement that the trigger for the probe was a report from a bank to the FIU in June 2018 on payments to Africa totaling more than 1 million euros ($1.18 million), which the bank suspected had to do with the weapons and drugs trade and terror financing. Prosecutors said the FIU “took note” of that report but didn't forward it to law enforcement authorities.

“We don't know at present why the data was not passed on — it might just have been because of overwork but it could also have some other background, which we now want to try to find out,” prosecutor Alexander Retemeyer told n-tv television. He added that the main aim was to determine who was responsible and so to identify suspects. At present, the investigation is directed against persons unknown.

Documents previously seized from the FIU showed that there was “extensive communication” between it and the ministries that were searched, the prosecutors' statement said.

They said they are looking into whether the leadership of or other officials at the ministries and elsewhere were involved in decisions by the customs department. It will take a few weeks to analyze documents that investigators secured, they added.

The finance ministry said the suspicion of wrongdoing was not directed against its own employees. It said that prosecutors' priority is to identify employees at FIU's Cologne headquarters and to find out to what extent the unit's “risk-oriented” approach was “discussed and secured” from a legal point of view. It said that the ministry is giving its full support to authorities.

The ministry said that Scholz, who became finance minister in 2018, has reinforced the FIU with extra staff and powers, and that its head was replaced that year.

Politicians from the opposition Greens and Free Democrats, however, criticized the state of the FIU and of financial oversight under Scholz.

The justice ministry also said that the investigation wasn't directed against its employees and that it was supporting the probe.