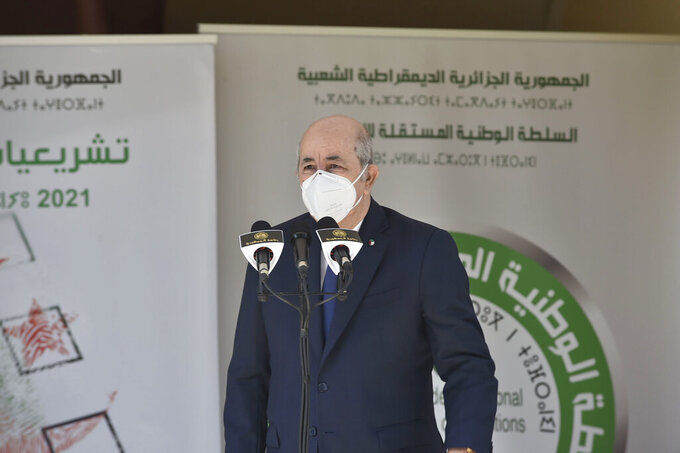 STR, ASSOCIATED PRESS
Algerian president Abdelmadjid Tebboune speaks to the press after casting his vote in the legislative elections at the Ahmed Ouroua school, in Algiers, Algeria, Saturday, June 12, 2021. Algerians vote Saturday for a new parliament in an election with a majority of novice independent candidates running under new rules meant to satisfy demands of pro-democracy protesters and open the way to a "new Algeria." (AP Photo)

Less than 24 hours after polls closed in the North African country, the head of the Movement for a Peaceful Society said the party “leads results in the majority of wilayas (regions) and overseas.” Party chief Abderrazak Makri also denounced alleged fraud attempts "to change the results.”

The party did not provide the basis for its victory claim.

The turnout for Saturday's parliamentary election was dismal, with less than a third of the 24 million eligible voters casting ballots, according to the chief of Algeria's electoral authority said late Saturday. The low participation reflected disinterest, longstanding opposition in the Berber region and a boycott by the pro-democracy movement that forced the country's longtime president, Abdelaziz Bouteflika, to resign in 2019.

The head of the National Independent Authority for Elections, Mohamed Charfi, said it would take about four days for official results to be finalized given the complexity of counting under a new system that opened the door to more than 1,000 independent candidates among more than 2,000 lists.

Charfi put the provisional turnout rate in the voting to fill 407 parliamentary seat at 30%.

President Abdelmadjid Tebboune instituted new rules for the election as part of his bid to fashion a “new Algeria" where young people and women are represented and devoid of the corruption that has been a signature of politics in a nation run by a fistful of elites.

He dismissed a low turnout when he cast his ballot Saturday morning, saying that "What is important is that those the people vote for have sufficient legitimacy.” Turnout for the 2019 election that made Tebboune president was 40%.

In the Kabyle region, a traditional opposition bastion, some polling booths never opened or were pillaged Saturday, according to Algerian media.

Commentators have suggested the new parliament may end up representing a hodgepodge of interests, including those of moderate Islamists and novice independents. The parties that dominated the national legislature body in an alliance under Bouteflika, the FLN and RND, have been disgraced.

The election took place amid a government crackdown on protests by the pro-democracy Hirak movement and a recent rule requiring the organizers of demonstrations to declare marches in advance, something the leaderless movement is hard-pressed to do.

Supporters of the movement opposed the election, saying they want a more drastic political transition to upend the system and start with a fresh slate. Dozens have been jailed.

This version corrects the spelling of the first name of the head of the Movement for a Peaceful Society to Abderrazak, not Abderazak.