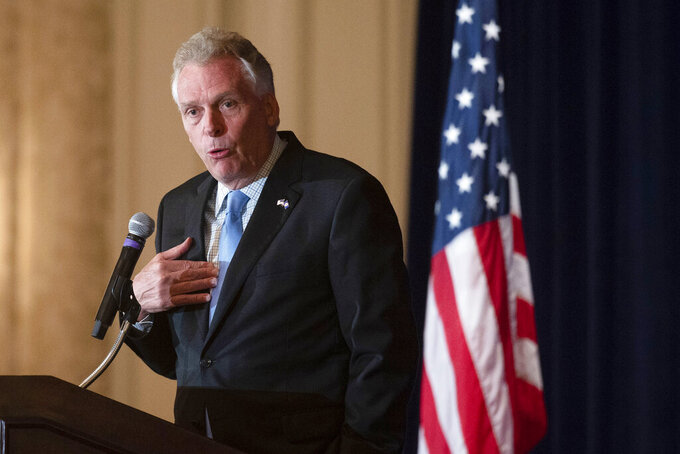 “We need to be concerned here,” he told a crowd of nearly 300 people gathered at Ritz-Carlton Tysons to hear from all six Democratic and Republican candidates for statewide office on the ballot this November. “I cannot tell you how dangerous this is for women. Dangerous. And it's crippling for business.”

McAuliffe's comments to the Virginia FREE leadership luncheon came as a Texas law banning most abortions took effect Wednesday with the U.S. Supreme Court so far unwilling to take up a legal challenge to the law.

Democrats have said that Youngkin and Republicans will erode abortion rights if elected and that a conservative majority on the Supreme Court will allow it.

Youngkin, in his remarks, did not mention abortion. Speaking to reporters after the luncheon, he said he's pro life but allows exceptions in cases of rape, incest and where the mother's life is in danger. But he expressed some frustration that he was being asked about abortion at a business forum, just days after he announced a plan to cut a variety of taxes.

“I think my opponent's going to use these topics to divide us again,” Youngkin said.

In his remarks, which were significantly longer than McAuliffe's, Youngkin cited his plan to provide tax rebates to Virginians, to double the standard exemption on state income tax returns and to require localities to submit property tax increases to voters for approval, among other tax cuts. He said the local property tax will be a backdoor way for government to increase the tax burden on Virginia families, with real estate values rising rapidly.

And he said the state's $2.6 billion surplus is evidence of overtaxation.

“Virginia ran a $2.6 billion surplus last year in the middle of a pandemic because the the liberal leadership in Richmond overtaxed everybody," Youngkin said. "That's Virginia's money, not Terry McAuliffe's.”

Asked by reporters after his speech about Youngkin's tax plan, McAuliffe called it “a joke.”

“Voters are smart. They know that this is not a real plan,” he said.