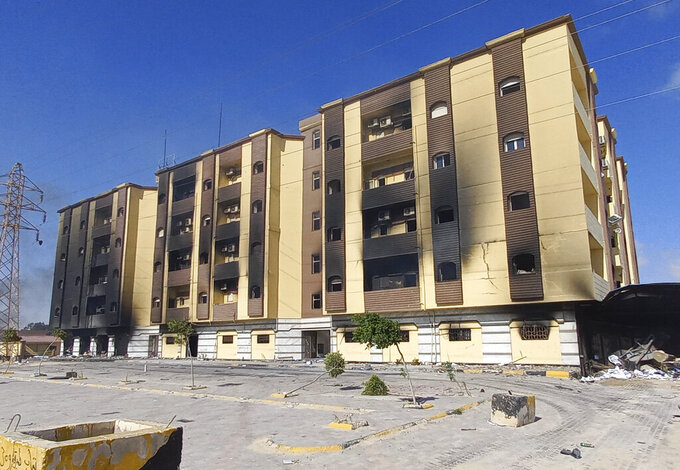 Mohamed Al-Refadi, ASSOCIATED PRESS
Libya's charred parliament building is seen in Tobruk, Libya, Saturday, July 2, 2022. Hundreds of protesters marched in the streets of the capital Tripoli and other Libyan cities on Friday, with many attacking and setting fire to government buildings, including the House of Representatives in the eastern city of Tobruk. (AP photo/

CAIRO (AP) — A senior U.N. official for Libya on Saturday condemned the storming of the parliament's headquarters in the east of the oil-rich country as part of protests in several cities the previous day against the political class and deteriorating economic conditions.

Hundreds of protesters marched in the streets of the capital, Tripoli, and other Libyan cities on Friday, with many attacking and setting fire to government buildings, including the House of Representatives in the eastern city of Tobruk.

“The people’s right to peacefully protest should be respected and protected but riots and acts of vandalism such as the storming of the House of Representatives headquarters late yesterday in Tobruk are totally unacceptable,” said Stephanie Williams, the U.N. special adviser on Libya, on Twitter.

The Secretary-General is following with concern the demonstrations that were held in several cities in Libya, including Tripoli, Tobruk and Benghazi, on 1 July.

Recognizing the right to demonstrate peacefully, he calls on all protestors to avoid acts of violence and on the security forces to exercise utmost restraint.

“The secretary-general urges Libyan actors to come together to overcome the continued political deadlock, which is deepening divisions and negatively impacting the country’s economy,” Dujarric said.

Friday’s protests came a day after the leaders of the parliament and another legislative chamber based in Tripoli failed to reach an agreement on elections during U.N.-mediated talks in Geneva. The dispute now centers on the eligibility requirements for candidates, according to the United Nations.

Libya failed to hold elections in December, following challenges such as legal disputes, controversial presidential hopefuls and the presence of rogue militias and foreign fighters in the country.

The failure to hold the December vote was a major blow to international efforts to bring peace to the Mediterranean nation. It has opened a new chapter in its long-running political impasse, with two rival governments now claiming power after tentative steps toward unity in the past year.

The protesters, frustrated from years of chaos and division, have called for the removal of the current political class and elections to be held. They also rallied against dire economic conditions in the oil-rich nation, where prices have risen for fuel and bread and power outages are a regular occurrence.

Protesters also rallied on Saturday in Tripoli and several towns in western Libya, blocking roads and setting tires ablaze, according to livestreaming on social media.

There were fears that militias across the country could quash the protests as they did in 2020 demonstrations when they opened fire on people protesting dire economic conditions.

Sabadell Jose, the European Union envoy in Libya, called on protesters to “avoid any type of violence.” He said Friday’s demonstrations demonstrated that people want “change through elections and their voices should be heard.”

The U.S. ambassador to Libya, Richard Norland, urged Libyan political leaders and their foreign backers to work for a compromise to hold elections.

“It is clear no single political entity enjoys legitimate control across the entire country and any effort to impose a unilateral solution will result in violence,” he warned on Twitter following a call with Mohammad Younes Menfi, head of the Libyan presidential council.

Libya has been wrecked by conflict since a NATO-backed uprising toppled and killed longtime dictator Moammar Gadhafi in 2011. The country was then for years split between rival administrations in the east and west, each supported by different militias and foreign governments.