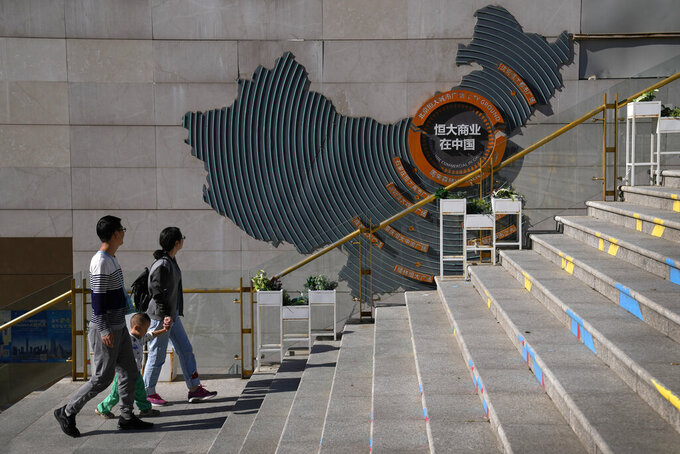 BEIJING (AP) — Global investors are watching nervously as one of China’s biggest real estate developers struggles to avoid defaulting on tens of billions of dollars of debt, fueling fears of possible wider shock waves for the financial system.

Chinese regulators have yet to say what they might do about Evergrande Group. Economists expect them to intervene if Evergrande and lenders can’t agree on how to handle its debts. But any official resolution is expected to involve losses for banks and bondholders.

The government “doesn’t want to be seen as engineering a bail out” but is likely to organize a debt restructuring to “reduce systemic risk and contain economic disruption,” Tommy Wu of Oxford Economics said in a report.

Evergrande is the biggest casualty yet from the ruling Communist Party’s effort to rein in surging debt levels.

Investors are watching how the developer headquartered in the southern city of Shenzhen near Hong Kong handles an interest payment due Thursday on one of its bonds.

A look at Evergrande and anxiety about its debt troubles:

Evergrande Group, founded in 1996, is one of China’s biggest builders of apartments, office towers and shopping malls.

The company says it has more than 200,000 employees and supports 3.8 million jobs in construction and other industries. Evergrande says it has 1,300 projects in 280 cities and assets worth 2.3 trillion yuan ($350 billion).

Evergrande’s founder, Xu Jiayin, was China’s richest entrepreneur in 2017 with a net worth of $43 billion, according to the Hurun Report, which follows China’s wealthy. He has tumbled down the list as internet industries boomed but still ranked as China’s richest real estate developer last year. He also topped Hurun’s 2020 list of philanthropists, giving away an estimated 2.8 billion yuan ($420 million).

WHAT'S THE IMPACT SO FAR?

Evergrande’s Hong Kong-traded shares have fallen 85% since early 2021. Its bonds are trading at an equally deep discount.

Of that debt, 240 billion yuan ($37.3 billion) was due within a year, nearly triple Evergrande's 86.8 billion yuan ($13.5 billion) in cash holdings, according to a company financial report.

In early 2021, Evergrande forecast its total annual transaction volume would surpass 2 trillion yuan ($310 billion). It reported a $1.4 billion first-half profit but says sales are weakening because news of its cash crunch is making would-be buyers nervous.

Evergrande has been squeezed by new limits regulators imposed on real estate-related borrowing as part of the Communist Party's campaign to reduce reliance on debt.

Economists have been warning China’s rising debt is a potential threat for more than a decade. The ruling party has made reducing such financial risks a priority since 2018. But total corporate, government and household borrowing rose to nearly 300% of economic output last year from 270% in 2018. That's unusually high for a middle-income country.

News reports indicate Evergrande borrowed everywhere it could, including by requiring employees of its construction contractors to buy its debt.

In 2017, state-owned China Citic Bank in Shenzhen agreed to lend 40 billion yuan ($6.2 billion) for an Evergrande project only after its executives agreed to invest at least 3 million yuan ($465,000) each, according to the business news magazine Caixin.

HOW DOES THIS FIT INTO THE PARTY’S PLANS TO REMAKE THE CHINESE ECONOMY?

It allowed China's first corporate debt default since the 1949 revolution in 2014 as part of efforts to force borrowers and lenders to be more disciplined. Until then, the government had intervened to bail out insolvent borrowers to avoid spooking financial markets. Beijing has gradually allowed more defaults, but none by a debtor as big as Evergrande.

WHAT ABOUT OTHER REAL ESTATE DEVELOPERS?

Other major developers such as Vanke Co., state-owned Poly Group and Wanda Group have not reported similar problems. But hundreds of smaller developers have shut down since regulators in 2017 started tightening control over fundraising tactics such as selling apartments before construction begins.

Chinese residential real estate is regarded as posing little risk to the financial system, however, because most apartments are paid for with cash, not mortgages. That makes a wave of home foreclosures and defaults on complicated financial derivatives like those in the United States after the 2008 crisis unlikely and easier for banks to manage.

“Given how bloated China’s property developers are, there could be a whole wave of defaults around the corner,” but Beijing has resources “to prevent a full-blown Chinese credit crunch,” Simon MacAdam of Capital Economics said in a report. “For all its flaws, this is one advantage of having a tightly controlled financial system versus a more free-market system.”

IS THERE RISK OUTSIDE CHINA?

Some commentators suggest Evergrande might become China’s “Lehman moment,” referring to the failure of Wall Street bank Lehman Brothers, a forerunner to the 2008 crisis. But economists say the risk of wider financial market contagion is low.

“A managed default or even messy collapse of Evergrande would have little global impact beyond some market turbulence,” said MacAdam of Capital Economics.

Evergrande has $18 billion of outstanding foreign-currency bonds, but much of that is held by Chinese banks and other institutions. Unlike Lehman, whose assets were financial instruments whose prices can swing wildly, Evergrande has 1.4 trillion yuan ($215 billion) of land and partially completed projects with relatively stable prices.

In the unlikely event of an outright default, China’s banking system has an annual profit of 1.9 trillion yuan and reserves of 5.4 trillion yuan against bad loans, “which could easily absorb the loss,” Larry Hu and Xinyu Ji of Macquarie Group said in a report.

Investors are waiting to see what Chinese regulators might do, but analysts say they appear to be focused on protecting home buyers by ensuring apartments already paid for are completed.

The government has injected money into other insolvent Chinese companies, but economists say Beijing appears determined to avoid doing that with Evergrande.

In August, Huarong Asset Management Co., Ltd., the biggest of a group of companies created to help resolve bad loans held by state banks, was bailed out by a capital injection from state-owned companies after it lost 102.9 billion yuan ($15.9 billion) last year.

In a letter Tuesday to employees, Xu expressed confidence the company will survive.

“Evergrande will surely get out of the darkest moment as soon as possible,” Xu said in the letter marking the traditional Mid-Autumn Festival.