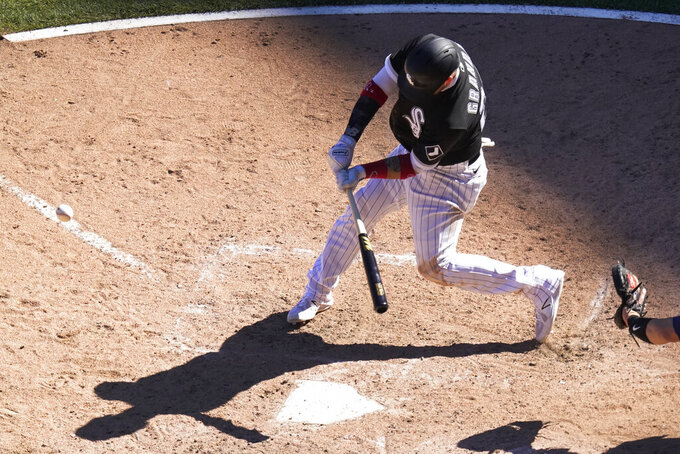 CHICAGO (AP) — Yasmani Grandal hit a game-ending RBI single in the 10th inning and the Chicago White Sox beat Tampa Bay 8-7 on Wednesday, taking two of three from the Rays in a matchup of division leaders.

Yandy Díaz and Mike Zunino homered for the Rays, who won Monday night’s opener but dropped the next two.

Abreu moved automatic runner Andrew Vaughn to third with a groundout and Grandal brought him home with a sharp liner to the right field wall off Pete Fairbanks (1-1).

“It’s huge,” said Grandal, who struck out with runners on in the fifth and seventh innings. “I left some guys in scoring position today, so the fact I was able to come through to walk it off was huge.”

Lucas Giolito retired the first 10 Rays, mostly with easy flyouts and popups, before Randy Arozarena doubled in the fourth.

The White Sox gave Giolito a 4-0 lead in the bottom of the inning. Abreu sent Yarbrough’s 1-2 delivery into the left field stands to score Vaughn, and Zack Collins added a two-run single.

Yarbrough gave up three more runs in the fifth. Tim Anderson scored from second when third baseman Díaz threw wide of first after fielding Brian Goodwin’s sacrifice bunt. Yarbrough was charged with seven runs, five earned, on 10 hits and a walk in 6 1/3 innings.

“It seemed like every time they put a ball in play, they were landing where we were not,” Rays manager Kevin Cash said. “I’m encouraged and, overall, impressed with the way the guys were able to get back into the game and ultimately tie it.”

Kevin Kiermaier doubled in two runs in the top of the fifth for the Rays, who got a solo shot from Díaz an inning later. Giolito left after six, giving up three earned runs on four hits while striking out seven and walking two.

“We’re feeding off each other. We’re picking each other up when we need to and that’s a winning formula,” said Giolito, who got a no-decision in his 100th career appearance. “It’s a long season. Not everybody’s going to have their best stuff every day.”

Zunino added a two-run knock off reliever Codi Heuer in the seventh and Tampa Bay tied it in the eighth when Mike Brosseau came home on a fielder’s choice and Manuel Margot doubled to score pinch-runner Brett Phillips. Both unearned runs were charged to Aaron Bummer.

Ji-Man Choi struck out swinging in the fourth but his bat almost made it out of the infield. The Rays first baseman lost hold of his stick on his follow-through and it flew just to the edge of the infield grass between first and second. No Chicago players were near the bat while it was in flight.

Rays: RHP Collin McHugh was placed on the COVID-19-related injury list before the game after waking up feeling ill. Cash said after the game that McHugh tested negative for the coronavirus. Right-hander Chris Mazza was recalled from Triple-A Durham to fill the roster spot. ... RHP Michael Wacha will likely start in place of injured Tyler Glasnow on Friday at Seattle after Cash didn’t use him out of the bullpen Wednesday.

White Sox: Leury García was at third base Wednesday as Yoán Moncada missed a third straight game with a sinus infection. Manager Tony La Russa said he believed Moncada will return to the lineup Thursday at Houston. ... RHP Michael Kopech (strained left hamstring) threw off a mound Tuesday but there’s still no schedule for his return to the bullpen. He’s been on the 10-day injured list since May 31.