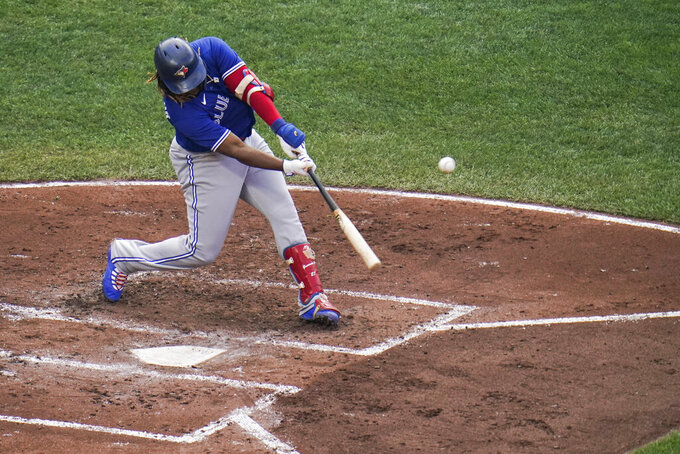 BALTIMORE (AP) — Bo Bichette and Alejandro Kirk hit a pair of two-run homers in an 11-run seventh and the Toronto Blue Jays beat the Baltimore Orioles 11-2 on Saturday night to complete a doubleheader sweep.

In the opener, George Springer hit a two-out, two-run homer in the seventh to give Toronto an 11-10 victory.

“It was a long day,” Springer said. “I just think this is a very resilient team and to get down early but to keep scratching and clawing every game is huge for us. Obviously, every game counts and this is a good day for us as a team. It's onto tomorrow."

In the nightcap, Vladimir Guerrero Jr. led off the seventh with single off rookie left-hander Keegan Akin (2-9), and Bichette followed with a towering homer to left field.

“Disappointing way to end the ballgame,” Akin said. “You don’t want to lose a ballgame like that at the end and we kind of let that get away from us.”

Tanner Scott entered for Baltimore and gave up another two-run homer to Kirk just over the right-field scoreboard.

“It’s just a lot of balls squared up,” Orioles manager Brandon Hyde said. “They’re big hitters and they have big-time numbers to show for it.”

Trevor Richards (7-2) got the win with a scoreless sixth inning.

Cedric Mullins hit a solo shot in the third. Mullins has homered in four of his past six starts and has 29 on the season. He needs one more home run and two more stolen bases to become the first 30/30 player in franchise history.

In the opener, Guerrero hit his 43rd home run of the season to move within one of the Angels’ Shohei Ohtani for the major league lead.

Nate Pearson (1-1) picked up the win with two scoreless innings. Jordan Romano earned his 17th save. Tyler Wells (2-2) was the loser.

“I don't believe what I just saw,” Toronto manager Charlie Montoyo said. “Honestly, what we did in the first game, I was expecting in the second game. There's no way. That's what this team does, We didn't quit."

Orioles: LHP Zac Lowther was recalled from Triple-A Norfolk on Sept. 6 allowed one run and three hits over six innings against the Royals in his second major league start.