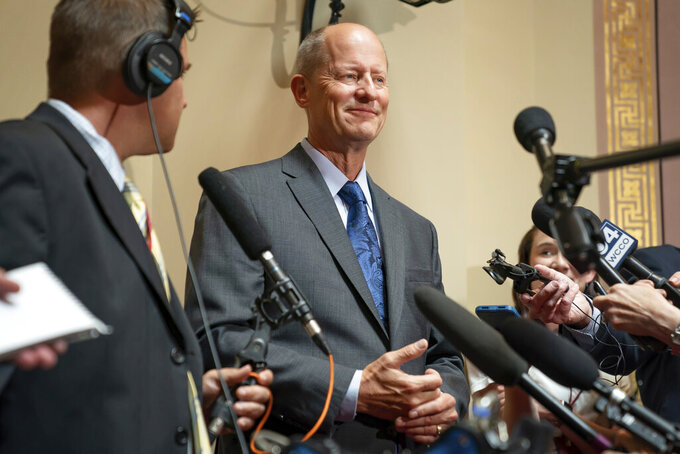 Glen Stubbe, ASSOCIATED PRESS
Senate Majority Leader Paul Gazelka, R-East Gull Lake held a press conference to provide guidance for the coming days to pass the budget bill Monday, June 14, 2021, in St. Paul, Minn. The Minnesota Legislature convenes for the first day of what's expected to be a prolonged special session to pass a two-year, $52 billion state budget. Leaders met all weekend in the lead up to special session Monday to try and finalize deals on a number of issues, including police reform and education funding. (Glen Stubbe/Star Tribune via AP)

MINNEAPOLIS (AP) — The Minnesota House launched into a long, contentious debate Thursday that delayed its first floor votes on the big budget bills that lawmakers were unable to pass before time ran out on the year's regular session last month.

The House had four bills teed up for final floor votes. But minority House Republicans were unhappy with being shut out of the closed-door negotiations between House Democrats and Senate Republicans that shaped them. And they showed it by launching a long filibuster that was expected to last into the night. They also filed about 60 amendments in advance.

“I think we're going to have a bumpy ride in the Minnesota House,” Democratic House Speaker Melissa Hortman, of Brooklyn Park, told WCCO Radio on Thursday morning, before the debate began. “The House minority is determined to make things take a little bit longer than they need to, but we'll get it done no matter how long it takes.”

An angry House Minority Leader Kurt Daudt, of Crown, blamed Democrats for disregarding GOP concerns while a narrow group of committee chairs worked out the details in private, and he vowed to vet all of the bills thoroughly on the floor.

“If you don't think that members of this chamber in this party are willing to stand here and fight for the Minnesotans that you are trying to hurt, you are dead wrong,” Daudt said in an opening speech that lasted over an hour. “Because the battle that we fight here on this floor today is a worthy one.”

The four bills covered the budgets for commerce and energy, agriculture, higher education, and programs funded by the Legacy Amendment, a sales tax increase that voters approved in 2008 to provide extra money for four dedicated funds: clean water, outdoor programs, arts and culture, and parks and trails.

“The bills that we are taking up today represent a bipartisan agreement with your Republican colleagues in the Senate — our Republican colleagues in the Senate. It represents an agreement with the executive branch," Winkler told the chamber. "The only thing standing in the way of this budget getting passed at this point in time is the actions of the minority caucus in the Minnesota House.”

Daudt and his fellow Republicans started the day with an hourslong, one-sided fight over the commerce bill as they tried to add a reauthorization of the state's 4-year-old health care reinsurance program. They said it's has been a big success at holding down premiums, and that Minnesota residents face steep increases unless the program is extended. Democrats, who stayed largely silent as GOP lawmakers stretched out the debate, consider it a giveaway to insurance companies.

By contrast, there was little partisan rancor as the Republican-controlled Senate took up its versions of the four bills. Senators laid them on the table with voice votes as a procedural move, just to keep the process going, while they waited for the House to pass them first.

Legislators are under pressure to get the budget bills passed to avert at least a partial government shutdown July 1 when the old budget expires. Hortman, Walz and Republican Senate Majority Leader Paul Gazelka, of East Gull Lake, agreed on broad targets for the $52 billion, two-year budget last month. The special session convened Monday, and negotiators are still filling in details and working through policy disputes.

Hortman told WCCO she wasn't concerned about a shutdown. The speaker said nine of the 14 budget bills were essentially wrapped up. But at least a couple still need intervention by top leaders, she said, including the public safety budget, which Democrats say should include new police accountability measures to build on those passed last summer in the wake of George Floyd's death after a Minneapolis officer knelt on his neck and pinned him to the ground. Senate Republicans have been cool toward adding restrictions on police amid rising crime.