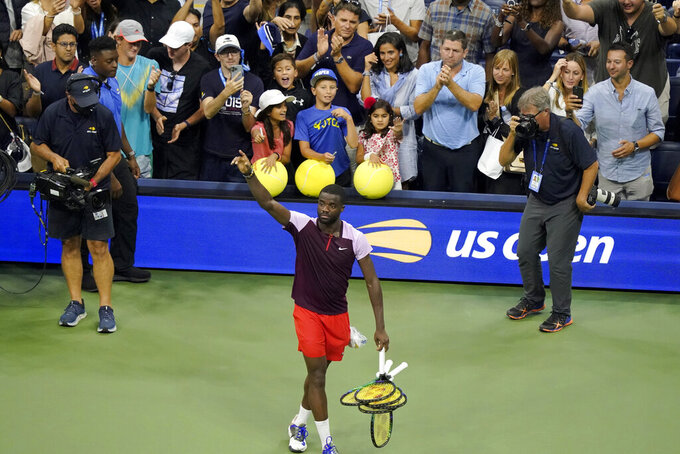 Mary Altaffer, ASSOCIATED PRESS
Frances Tiafoe, of the United States, gestures to the crowd after losing to Carlos Alcaraz, of Spain, in the semifinals of the U.S. Open tennis championships, Friday, Sept. 9, 2022, in New York. (AP Photo/Mary Altaffer)

NEW YORK (AP) — U.S. Open semifinalist Frances Tiafoe pulled out of the United States team that will play group stage matches in the Davis Cup next week in Glasgow, Scotland.

Tiafoe, a 24-year-old from Maryland who was seeded 22nd at Flushing Meadows, became the first American man to get to the U.S. Open semifinals since Andy Roddick was the tournament's runner-up in 2006.

Roddick was the last man from the country to win any Grand Slam tournament when he earned the trophy in New York three years before that.

Tiafoe’s run ended with a five-set loss to No. 3 seed Carlos Alcaraz, a 19-year-old from Spain. Alcaraz will meet No. 7 seed Casper Ruud of Norway in Sunday’s final, with the winner collecting his first Grand Slam title and rising to No. 1 in the ATP rankings for the first time.

Captivating crowds in Arthur Ashe Stadium with his superb play and unbridled enthusiasm, Tiafoe reached the second major quarterfinal of his career by eliminating Rafael Nadal in the fourth round in New York — ending the 22-time Slam champion's 22-match unbeaten run at major tournaments.

Tiafoe followed that up by defeating No. 9 seed Andrey Rublev to get to the semifinals.

“Obviously, through my career, I’ve been pretty sporadic (at) playing well, (then) veering off for a while,” Tiafoe said. “I’ve always backed myself against the best players in the world. I’m doing it on a consistent basis, starting to beat guys more readily. Ready to take the next step.”

The USTA said Tiafoe would not be replaced on the Davis Cup roster for the Americans, who will start by facing Britain on Wednesday. The other U.S. players are Taylor Fritz, Tommy Paul, Jack Sock and Rajeev Ram.

U.S. Davis Cup captain Mardy Fish will miss the trip to Scotland because he got COVID-19, and Bob Bryan will fill in as acting captain. Bryan was a member of the U.S. squad that won the Davis Cup in 2007.

Britain's team is expected to include three-time major champion Andy Murray and Dan Evans, who is ranked 23rd this week.

The top two teams from each group advance to the Davis Cup Finals in Malaga, Spain, on Nov. 22-27.