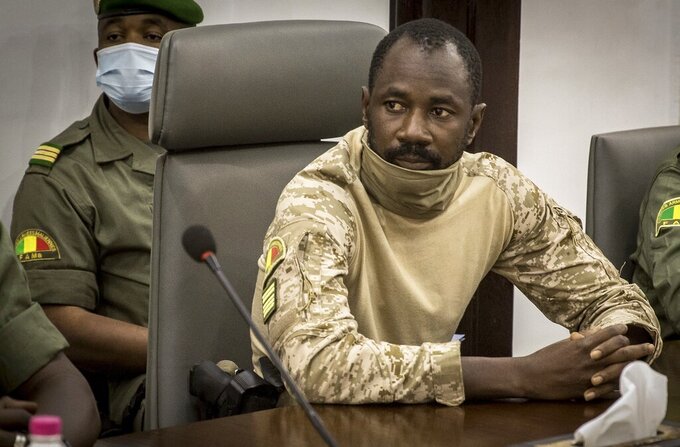 Uncredited, ASSOCIATED PRESS
FILE - Col. Assimi Goita meets with a high-level delegation from the West African regional bloc known as ECOWAS, at the Ministry of Defense in Bamako, Mali on Aug. 22, 2020. Explosions and gunfire were heard Friday July 22, 2022 in the area of the Kati military base on the outskirts of Bamako, according to local residents, in a suspected attack by Islamic extremists. Goita frequently stays at the Kati camp, where he launched the 2020 coup that brought him to power. (AP Photo, File)

It's the first time Kati, Mali's largest military base, has been hit by extremist rebels in their more than 10-year insurgency in the West African country.

Two vehicles loaded with explosives detonated at the camp at about 5 a.m., according to a statement issued by the military.

“The Malian Armed Forces vigorously repelled a terrorist attack on the Kati barracks,” said the statement, which said that 7 attackers were killed and 8 arrested.

“The terrorists first blew up the vehicles at the entrance to the military camp, then shells were fired at the camp," said a military official, who requested anonymity because he is not authorized to speak to the press.

Another group of the jihadis entered the camp on foot and “began burning vehicles parked in the camp, and then the attackers stole two army vehicles,” he said.

Friday’s attack on the Kati barracks base follows a coordinated series of insurgent attacks Thursday. In one of those incidents, the extremists attacked a police base in Kolokani, 60 kilometers (37 miles) north of Bamako and two Malian soldiers were killed, said the military in an earlier statement.

The leader of Mali's ruling junta Lt. Col. Assimi Goita frequently stays at the Kati camp, where he launched the 2020 coup that brought him to power.

Jihadi rebels linked to al Qaida and the Islamic State group have been gaining ground in their decade-long insurgency. Their attacks have mostly been in northern Mali but recently the extremists have moved into central Mali. This month they've moved closer to the capital.

No group has claimed responsibility for the attacks, but they appear to be by the al-Qaida-linked group known as JNIM.

The attacks show “how the al-Qaida affiliate Jama’at Nusrat al-Islam wal-Muslimin continues to expand its operations outside its traditional strongholds in northern and central Mali,” said Héni Nsaibia, a senior researcher at The Armed Conflict Location & Event Data Project.

“As in other Sahelian countries such as Burkina Faso and Niger ... major cities including the capitals themselves, are increasingly surrounded by a steady spread of Islamist militancy that poses an ever-increasing risk and challenge to the security environment.”

Mali has struggled to contain the Islamic extremist insurgency since 2012. Extremist rebels took control of Mali’s northern cities but were then forced out with the help of a French-led military operation. The jihadis regrouped in the desert and began attacking the Malian army and its allies. Insecurity has worsened with attacks in the northern and central regions on military targets, civilians and U.N. peacekeepers.

The U.N. force has said more than 250 of its peacekeepers and personnel have died since 2013, making Mali the deadliest of the U.N.’s dozen peacekeeping missions worldwide.

Last week the United Nations mission in Mali announced that Egypt will suspend its participation in the peacekeeping force by mid-August, citing deadly attacks. Seven Egyptian peacekeepers have been killed in Mali so far this year, according to officials.

Tensions have grown between Mali’s junta and the U.N. peacekeeping force. Earlier this month the government told the U.N. mission to suspend all flights to move its forces in the country. The government also detained 49 Ivorian soldiers who flew in to help with security for a company contracted by the U.N. mission.

Separately, a European military force that helped fight extremists withdrew from Mali at the end of June. The French military, which spearheaded the Takuba task force, announced the end of its deployment in Mali. The move was tied to France’s decision earlier this year to withdraw troops from Mali after nine years helping Malian forces fight the extremists.

The exit of the European troops and tensions with the U.N. peacekeeping force come as Mali’s junta has grown closer to Russia with the Wagner Group, a private Russian mercenary force, sending fighters to Mali.

The attacks this week were condemned by the U.N. special representative in Mali, El-Ghassim Wane.

“I offer my condolences to the government and people of Mali as well as to the families and loved ones of the fallen soldiers. I wish a speedy recovery to the injured,” he said in statement Friday.

The U.N. mission in Mali will continue “to support and accompany the efforts of the Malian authorities aimed at restoring lasting peace and security,” he said.