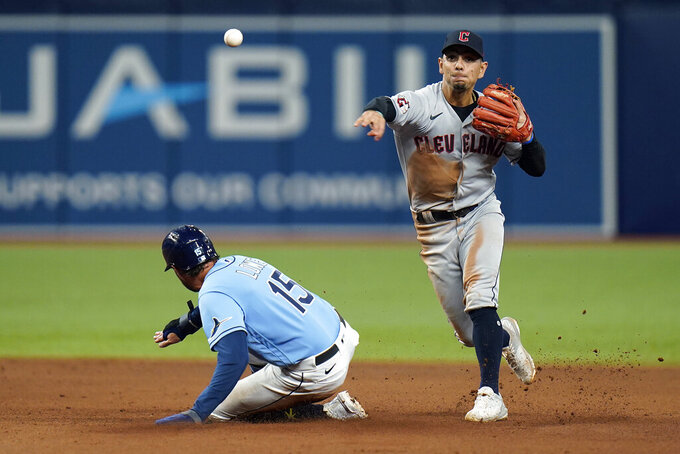 ST. PETERSBURG, Fla. (AP) — José Ramírez homered and drove in three runs, leading Shane Bieber and the Cleveland Guardians to a 4-1 win over the Tampa Bay Rays on Friday night in a matchup of American League playoff contenders.

In the lineup at designated hitter, Ramírez hit a tiebreaking, two-run homer in the fifth inning.

“Sometimes (DH-ing) is similar to having a day off,” the All-Star third baseman said through a translator, “but that's the way I sometimes help the team.”

In the opener of a three-game series, Bieber recovered from a rough start and struck out eight in seven innings to help the Guardians move within 1 1/2 games of the Rays for the final AL wild card. Cleveland is also right on the heels of first-place Minnesota in the AL Central.

Ramírez's 21st homer, a drive off Jeffrey Springs (3-3), was his first as a right-handed hitter since May 24. Ramírez added a two-out RBI single in the eighth after rookie Steven Kwan's third single.

Bieber (5-6) is just 2-3 in nine starts since June 3. The 2020 AL Cy Young Award winner needed 26 pitches to get through the first, when Ji-Man Choi hit a run-scoring single.

“That was a frustrating (inning), and there were a couple of pitches I would have liked back,” Bieber said. "But I was able to limit the damage and then kind of fell into a rhythm in the second inning. I felt like tonight was a step in the right direction. ... It was a confidence-inspiring outing and I’ve got to keep it going forward.”

The Rays left the bases loaded in the first when Christian Bethancourt struck out.

“I thought we were going to get more runs in the first inning, but he was able to recover and get control,” said Yandy Diaz, who scored Tampa Bay's run after leading off with a single.

Emmanuel Clase pitched the ninth for his 22nd save in 24 chances, getting Bethancourt to ground into a game-ending double play. The Guardians won for the third time in four games.

Tampa Bay has lost six of seven while scoring only 16 runs.

“I think every team goes through slumps like this, and right now we’re stuck in that moment,” Diaz said.

Bieber, who has pitched six innings or more in 11 of his last 13 starts, gave up one run and five hits.

“When he gets in that rhythm and he starts commanding and he starts spinning the breaking ball, he can be really good,” Cleveland manager Terry Francona said. “I think he was mad (about the first inning). That’s not how you want to start the game. But he got into his delivery and then you saw quicker innings.”

Guardians: RHP Aaron Civale, on the 15-day IL since July 14 with a sprained right wrist, is scheduled to throw off a mound Sunday.

Rays: The neck strain that landed RHP Matt Wisler on the 15-day injured list Wednesday is minor, according to manager Kevin Cash. ... C Mike Zunino, who last played June 10 and is out for the season, had surgery on his left shoulder Thursday.

Rays RHP Corey Kluber (6-6, 3.91 ERA) will make the second start of his career Saturday against the team for which he won AL Cy Young Awards in 2014 and 2017. Kluber pitched six scoreless innings for the Yankees against Cleveland last Sept. 17, earning a win. RHP Zach Plesac (2-8, 4.09) goes for the Guardians.