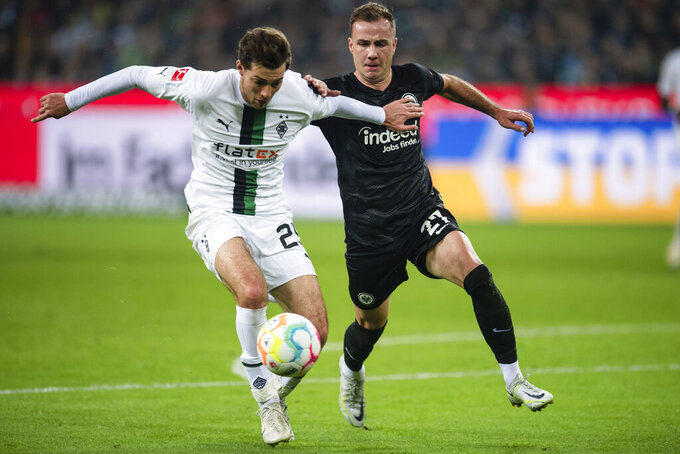 NEW YORK (AP) — The U.S. World Cup team is truly of the video generation. Players who received a FaceTime from coach Gregg Berhalter were headed to Qatar and those given audio calls missed the cut.

“I think the best part of it the last couple of days was really seeing genuine smiles from the guys when I told them, and that’s priceless,” Berhalter said Wednesday night after the televised announcement of his 26-man roster.

Norwich's Josh Sargent and Antalyspor’s Wright beat out Pepi, the 19-year-old whose three goals in qualifying were second behind Christian Pulisic's five. Berhalter rated Sargent playing in England's second-tier League Championship higher than Pepi in the Dutch Eredivisie, especially with the U.S. opening the tournament against Wales on Nov. 21 and facing England four days later before finishing group play against Iran on Nov. 29.

"The Dutch League is a great league, but it doesn't bring the same physicality that the Premier League brings and the Championship brings,” Berhalter said. “Ricardo Pepi could have a great argument for why he should be there, and I can understand that argument.”

Players started getting texts from Berhalter on Sunday afternoon: “Are you available?” He spent three days going through the roster, then turned to just over a dozen dealt the devastation of falling short.

On what figures to be the youngest of the 32 teams by average age, 29-year-old right back DeAndre Yedlin is the only holdover from the 2014 World Cup. Yedlin, Pulisic, Kellyn Acosta and Ream are remaining players from the infamous loss at Trinidad that prevented the Americans from reaching the 2018 tournament.

“This could be a little bit of a redemption or revenge tour if you want to call it that,” Yedlin said. "This is now our time to really — I don’t want to say apologize for that, but show how much we do want it.”

With central defenders Miles Robinson and Chris Richards sidelined by injuries, the 35-year-old Ream returns to the national team for the first time since the opening window of qualifying in September 2021. Ream didn't play in the final four qualifying windows as Berhalter preferred more mobile options, then was selected over Mark McKenzie and Erik-Palmer Brown.

"He’s playing in the best league in the world and he's playing at a very high level,” Berhalter said.

Cameron Carter-Vickers, a son of former NBA player Howard Carter, also was picked as a central defender. Carter-Vickers, Johnson, Scally, Wright and goalkeeper Ethan Horvath did not appear in any of the 14 qualifiers.

Shaq Moore was picked as a backup over Reggie Cannon at right back and Cristian Roldan ahead of Malik Tillman in midfield, where Berhalter called Arriola “the odd man out.”

“These past few days have been extremely difficult. Some of the hardest I've had in a while,” Arriola wrote on Twitter. “I am heartbroken.”

Johnson, 33, was a surprise pick over Steffen, who started six qualifiers. He received the news while sitting on a sofa at his home in Hoboken, New Jersey.

“I wasn’t going to move very far away from my phone, just waiting for the call,” Johnson said. “The first thing he said, I think, was, `Why are you still wearing the same shirt from (training) camp?' Then we talked about yoga and doing yoga that morning. Yeah, I was sweating a little bit. But ultimately we got to that point in the conversation and the weight was just lifted and it was just pure elation.”

Nine players are from Major League Soccer; eight are with English clubs; two each are based in Germany, Italy and Spain; and one apiece plays in France, Scotland and Turkey.

Scally and midfielder Yunus Musah are just 19. Winger Gio Reyna, a son of former U.S, captain Claudio Reyna, turns 20 on Sunday. The average age of 25 years, 175 days as of the opener is the second-youngest for the U.S. at a World Cup behind 24 years, 24 days in 1990.

Pulisic, the biggest U.S. star, has started just five matches for Chelsea this season. Outside back Sergiño Dest has made just two starts for AC Milan and hasn’t played at all since Oct. 30 due to an adductor injury. Midfielder Weston McKennie has been sidelined at Juventus since Oct. 29 by a thigh problem.

Reyna is coming off repeated leg issues and has played one 90-minute match for Borussia Dortmund since April 2021. Matt Turner, the likely No. 1 goalkeeper, has yet to make his Premier League debut with Arsenal and has been limited to four Europa League matches for the Gunners this season, the last Oct. 20.

Midfielder Luca de la Torre has not played for Spain’s Celta Vigo since Oct. 24 because of a torn muscle in his left leg and might not be 90-minute fit. Sargent returned Saturday for Norwich in England’s second-tier League Championship after missing two matches with a calf injury.

Berhalter, the first former U.S. player to coach the Americans at a World Cup, reminded those who fell short of how he was left off the roster in 2006. Three weeks later, he was riding the monorail between the Magic Kingdom and Disney-MGM Studios in Florida on vacation when he learned he was replacing Cory Gibbs, who injured a knee.

“I wanted to acknowledge that it is unpleasant news that they’re getting, but there also is this sliver of hope,” Berhalter said.

“It's still a relief and still a weight off your shoulders," McKennie said, “when you can actually hear the words that you are on the final roster.”