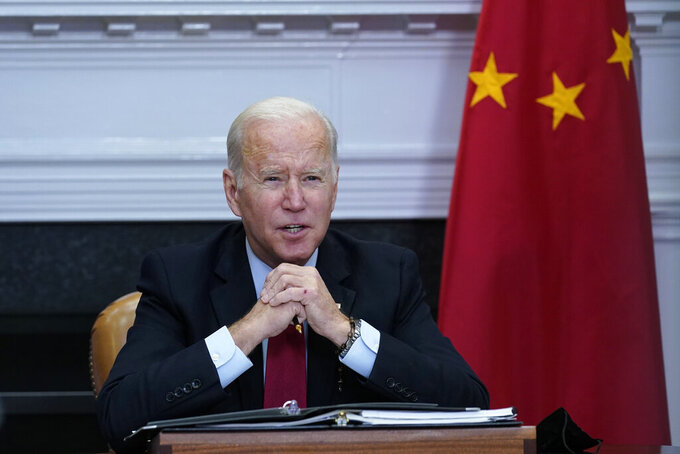 BEIJING (AP) — No breakthroughs were delivered during talks between Chinese leader Xi Jinping and U.S. President Joe Biden, but the cordial tone of the virtual meeting is an indication that relations between the sides may be turning a corner — even if that means merely walking back from the heated exchanges of earlier this year.

Here is a look at what is driving tensions between the world's two biggest economies and the main takeaways from the Xi-Biden talks.

FROM WORSE TO BAD

Relations went into sharp decline after then-President Donald Trump imposed sweeping tariffs on Chinese goods in retaliation for what he said were Beijing's unfair trading practices. The U.S. had for years been complaining about the theft or forced transfer of American technology and was campaigning to keep Chinese communications giants, most notably Huawei, out of the U.S. and other markets. The Trump administration also sharply criticized China on human rights issues.

Relations remained frosty after Biden took office. At a meeting in Alaska in March, senior Chinese foreign policy adviser Yang Jiechi berated Secretary of State Antony Blinken and National Security Adviser Jake Sullivan, accusing the U.S. of failing to deal with its own human rights problems and taking issue with what he said was American hypocrisy.

A trip to China by America's No. 2 diplomat Wendy Sherman in July was equally sour in tone, and a subsequent visit by U.S. climate envoy John Kerry went little better.

Relations appeared to have bottomed out when Sullivan and Yang met again in Switzerland last month, in a follow-up to a phone call between Xi and Biden. Sullivan made clear that the United States sought better engagement at a senior level “to ensure responsible competition,” according to the White House.

The meeting laid the groundwork for the virtual meeting Tuesday morning Beijing time between Xi and Biden, who have known each other since both were vice presidents. Xi referred to Biden as his “old friend" and they lamented they were not meeting face-to-face before launching into 3 1/2 hours of discussions.

The U.S. described the talks as respectful, straightforward and open, and Chinese spokesperson Zhao Lijian called them “candid, constructive, substantive and fruitful.”

The sides are at odds over everything from trade and technology to human rights, self-governing Taiwan and the South China Sea.

In some of his most pointed comments, Xi said “Taiwanese independence forces" and those in the U.S. who would use them to contain China were the key sources of tension over the island that China claims as its own territory. “We have patience and are willing to show utmost sincerity and exert the greatest efforts to obtain peaceful unification," Xi said, according to China's official Xinhua News Agency. “However, if the Taiwan independence separatist forces provoke and force our hand, we will be required to take drastic measures."

Alongside “human rights more broadly,” Biden raised concerns about China's practices in Tibet, the crackdown in Hong Kong, and the Uyghur homeland of Xinjiang where an estimated million people or more have been detained in re-education camps, according to experts.

Xinhua made no mention of specific human rights issues. It quoted Xi as saying that China was willing to engage in a human rights dialogue “on the basis of mutual respect, but we do not support using human rights to interfere in other countries’ domestic affairs.”

Trade relations have also driven strains in bilateral ties. Xi said Beijing was opposed to the “politicization of trade” and Washington's invocation of national security to block market access for Chinese companies.

WHERE DO THEY GO FROM HERE?

The softened rhetoric marks a major improvement. What benefits accrue depends on whether the two countries can find areas of cooperation and come up with agreements, work-arounds or other ways of managing their disputes.

“This is an important relationship, perhaps the most consequential bilateral relationship in the world, the two largest economies, two largest militaries, two largest greenhouse gas emitters," said Paul Haenle of the Carnegie Endowment for International Peace. “So the fact that the two leaders are meeting, in my view, is a good thing. But we need, I think, to be realistic."

It is “very important for the leaders of the two countries to define the relationship and steer the direction," said Yu Wanli, a professor of international relations at Beijing Language and Cultural University. China will be looking for Biden to take action but recognizes the political constraints he faces at home, Yu said.

If nothing else, the summit may have arrested any further deterioration in ties, said Wang Huiyao, president of the Center for China and Globalization in Beijing.

The positive message sent by the two leaders will “really set a good example for all working levels of both governments to really talk to each other, find the common denominators and find all the good points that they can seek from each other," he said.

Paul Haenle’s affiliation has been corrected to the Carnegie Endowment for International Peace, not World Peace.