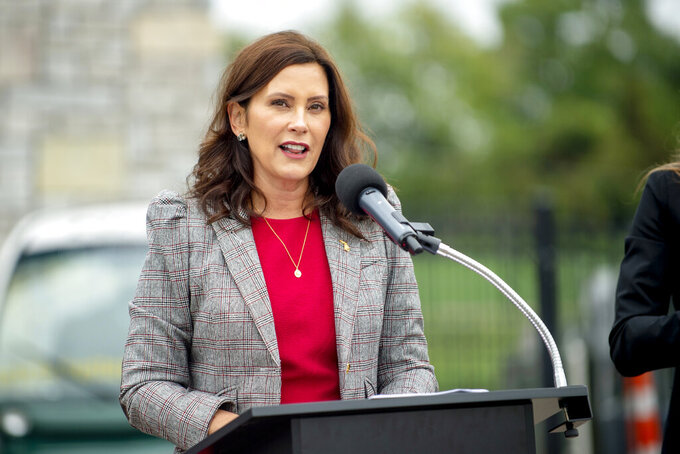 LANSING, Mich. (AP) — The Michigan Republican Party on Tuesday sued to stop Gov. Gretchen Whitmer's reelection campaign from collecting excess donations, contending that an exception letting her raise unlimited amounts because of attempts to recall her from office is unconstitutional.

The lawsuit in federal court, also brought by party chairman Ron Weiser, seeks to prohibit Democratic Secretary of State Jocelyn Benson from allowing the “recall exemption" in the 2022 governor's race. Benson has been considering a conservative group's challenge to $3.4 million in contributions to Whitmer that exceeded the $7,150 per-person limit.

The Democratic governor's campaign has cited a 1984 ruling from a prior secretary of state that says donor limits cannot apply to officeholders facing a recall election. But Republicans have said people never “actively” sought to recall Whitmer because the longshot efforts fell way short of the necessary voter signatures.

“While it’s no secret that she thinks she’s above the law and rules don’t apply to her, our lawsuit will ensure that her crony, Secretary of State Jocelyn Benson, applies campaign finance rules fairly to all candidates running for governor,” GOP spokesman Gustavo Portela said in a statement.

Benson spokeswoman Tracy Wimmer declined to comment on the litigation.

“As has been explained previously, under a long-standing statement and ruling issued by the (elections bureau), because recall petitioners can raise unlimited funds, so can the governor once a recall is initiated. However, those funds must be returned or donated if the recall does not become active,” she said.

In July, Whitmer campaign spokesman Mark Fisk said if funds exceeding the individual limit are not used to fight a recall, they can legally be transferred to another account. He mentioned the Michigan Democratic Party as an example.