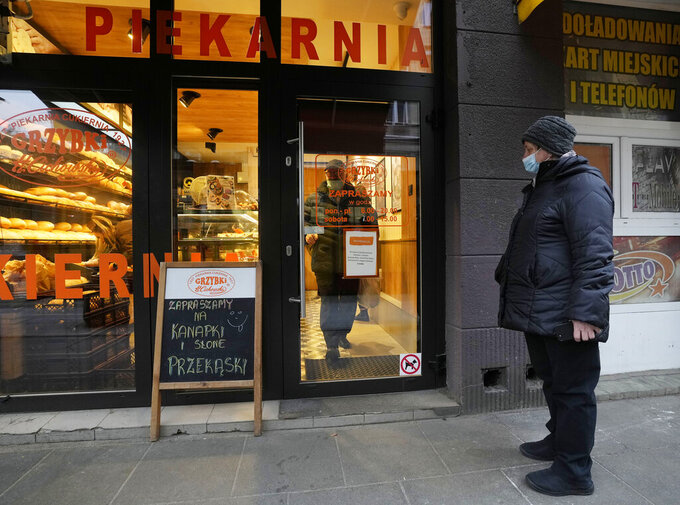 Czarek Sokolowski, ASSOCIATED PRESS
A customer wearing a face mask prepares to leave a bakery, in Warsaw, Poland, on Friday Nov. 26, 2021. Poland is facing skyrocketing COVID-19 infections and deaths but for now the government does not plan any new lockdowns or other restrictions. (AP Photo/Czarek Sokolowski)

WARSAW, Poland (AP) — Poland said Tuesday that consumer prices have risen 7.7% over the past year, evidence that inflation is accelerating even faster than had been expected in the largest central European economy in the European Union.

The November number is the highest inflation rate in 20 years and marks a larger jump than what economists had predicted. Last month, it hit 6.8% annually, according to the statistics office.

The rising prices mark one of the most serious setbacks for a economy that has been growing quickly since throwing off communism three decades ago and whose modernization has been helped by EU membership.

Polish Prime Minister Mateusz Morawiecki announced Tuesday that his government had approved measures to cushion the blow from inflation, including tax cuts on fuel and subsidies aimed at helping millions of households.

They are meant “to protect Polish families, protect budgets and reduce the burdens related to the increase in prices,” he said.

Morawiecki has blamed rising inflation partly on the soaring cost of Russian gas imports. He also faulted the EU’s climate program and efforts to reduce greenhouse gases, with the cost of emitting carbon hitting records recently.

Poland's rising prices were reported as the annual inflation rate across the 19 countries that use the euro currency hit 4.9% in November, the highest since recordkeeping began in 1997, the European Union’s statistics agency said Tuesday.

Eurozone consumer prices are being driven up by a huge spike in energy costs, much like Poland's increases are fueled by gasoline prices. They have skyrocketed 36.6% since last year, exacerbated by a weakening of the country's currency, the zloty. The weaker zloty means that imports — including oil, which is priced in U.S. dollars — become more expensive for Polish consumers.

The cost of heating jumped 13.4%, while food and non-alcoholic beverage prices rose 6.4%.

While rising prices are straining households and businesses worldwide, they are hitting countries in central Europe, including Poland and Hungary, especially hard.

Inflation is one of the effects of measures governments took to prevent economic catastrophe when the coronavirus pandemic led to lockdowns last year. Many countries, including Poland, pumped money into keeping businesses afloat, while central banks kept interest rates at historic lows to stimulate economic activity.

At a news conference, Morawiecki recalled that his government pumped 200 billion zlotys ($50 billion) into the economy earlier in the pandemic so COVID-19 would “not lead to the bankruptcy of hundreds of thousands of Polish entrepreneurs and the liquidation of millions of jobs.”

By that measure, the effort has been largely successful. Poland's economy grew 5.3% in the July-September period and is predicted to keep expanding at about that pace next year. Unemployment is low.

But as economic life has started returning to a pre-pandemic normal, a surge in demand has tested the capacity of suppliers to keep pace. Shortages of raw materials are one reason for the price surges.