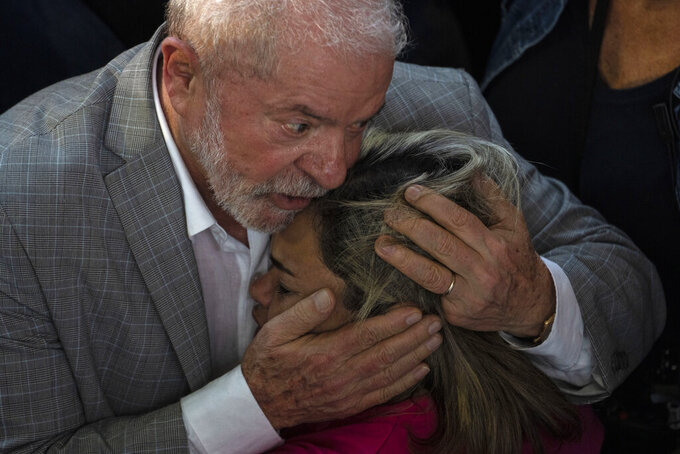 Rodrigo Abd, ASSOCIATED PRESS
Brazil's former President Luiz Inacio Lula da Silva, who is running for president, embraces a supporter during a political rally in Sao Gonçalo, on the outskirts of Rio de Janeiro, Brazil, Friday, Sept. 9, 2022. Various polls have found that many evangelicals have migrated from da Silva to his rival, President Jair Bolsonaro, a shift attributed to the incumbent’s campaign to portray Brazil as spiritually ill and who argues only he can safeguard Christian faith. (AP Photo/Rodrigo Abd)

SAO PAULO (AP) — Brazil’s presidential election will be decided by tens of millions of poor people, and they look set to eject incumbent Jair Bolsonaro from office — either in Sunday's first round or in a runoff.

The far-right leader is reminding them of his pandemic welfare program that morphed into a monthly handout equal to $112. The race's frontrunner, leftist former President Luiz Inácio Lula da Silva, is rekindling memories of his 2003-2010 presidency, when many poor Brazilians could suddenly afford beer and barbecue on the weekends. In 2014, the U.N. removed Latin America's biggest country from its Hunger Map.

Since then, Brazil's economy fell into the dumps, rose to the doldrums and then fell back. This year, the economy started recovering again and unemployment is at its lowest since 2015, but many remain doing informal, occasional jobs, and rampant inflation put even sufficient basic food out of their reach.

Thirty-three million Brazilians were going hungry in the six months through April, according to a study by several nonprofit organizations, including Oxfam.

Both Bolsonaro and da Silva promise to boost government spending on the poor if they win, which would mean either skirting or scrapping a constitutional cap on expenses. Many Brazilians are leery, particularly regarding the incumbent, whose 2023 budget proposal didn't include extension of the welfare program at the same level.

“They seem to associate the continuity of those policies with a change (of administration)," said Mario Sérgio Lima, a senior Brazil analyst for Medley Global Advisors.

Even in Brazil's wealthiest state, the poor are giving a boost to da Silva, who has only carried Sao Paulo once in his five prior runs. In the hardscrabble community of Jardim Angela, local leader Regina Paixão said many who voted for Bolsonaro have turned against him because of hardship. Some “haven't eaten beef for ages” and hold him responsible, she said.

Another community member, Paula Araújo, who sometimes works as a housekeeper, experienced hunger for the first time during the pandemic. She couldn't afford gas to keep the stove running beneath the leaky roof of her tiny home, so she has used an electric iron to heat her pots. She cooked packets of instant noodles for nearly every meal, most of them donations, but it wasn't enough.

She and her husband André say pandemic welfare only arrived in late 2020, once they were already suffering hunger. The $37 increase Bolsonaro authorized in August as part of his electoral push was consumed by inflation.

The split among the poor is among the most lopsided in this race: Da Silva has 54% support from those making less than two minimum wages per month — equal to $450 — and Bolsonaro just 26%, according to a Sept. 29 Datafolha poll that had a margin of error of plus or minus two percentage points.

Low-income Brazilians would have to show up in force on Sunday for da Silva, known universally as Lula, to earn an outright majority of votes in a multi-candidate field and secure a first-round victory. Though voting is legally mandatory in Brazil, the abstention rate is as high as 20%, which analysts like Lima believe could lead to an Oct. 30 runoff.

"This is a group that traditionally abstains more. I don't think that will be key, but that might reduce the chance of an outright victory for Lula,” he said.

Even if abstentions on Sunday help Bolsonaro reach a runoff, he still needs to win over some poorer Brazilians if he's to have any chance of victory. That fact seemed to elude him in August, when he said in an interview “real hunger doesn't exist” in Brazil and received a deluge of criticism.

He has since changed his tune, recognizing hunger as a pressing problem, but he blames its origin on the governors and mayors who imposed lockdowns during the pandemic.

William Oliveira, a community leader and activist in Rocinha, Rio's largest favela, did not vote for Bolsonaro four years ago, but will do so this time.

He believes the president deserves to be reelected like all his three predecessors. Oliveira says he understands why many of his friends criticize Bolsonaro, but he considers the incumbent’s conservative Christian values important.

“It is not about the criticism he gets, the pandemic, many things. To give him the opportunity for a second term is to give him what others had to govern. Regardless of his weaknesses, Bolsonaro defends the family, and that is key for our government. I believe family matters a lot,” Oliveira said.

Bolsonaro has tried to shift the debate to da Silva's corruption convictions in 2018, which were later overturned by the country's top court. He has insisted the nation's economic woes won't be solved by electing a man he calls a thief and an ex-convict.

His efforts have born little fruit, in part because of the poor. Analysts expected Bolsonaro to carry his home state, Rio de Janeiro, but polls say he is in a dead heat even there against the former president.

Fernanda Gomes said the welfare she received from Bolsonaro's government hasn't been enough to make rent and put food on the table for her four children in Rocinha.

“Even if people say Lula is a thief, in the times of Lula we could buy a better TV, the poor could buy a car and finance it. Education was a bit better, he gave some benefits,” said Gomes. “Bolsonaro did nothing for me. On the contrary, he made things harder for people with lower income."

As cold drizzle fell in the district of Brasilandia, one of Sao Paulo’s poorest, women and children gathered on a muddy soccer pitch to get free meals from evangelical pastor Welington da Silva Rodríguez.

Pamela dos Santos Pereira, 33, got her share and left in a hurry with some rice, beans and chicken. She ran so her newborn João would quickly have a roof over his head. Once they entered her wooden shack, with a dirt floor under her feet and a fetid smell of open sewage, the baby cried.

“There is no more milk,” dos Santos Pereira said. “You have to wait for your godmother, if she comes.”

AP videojournalist Renata Brito contributed to this report in Rio.