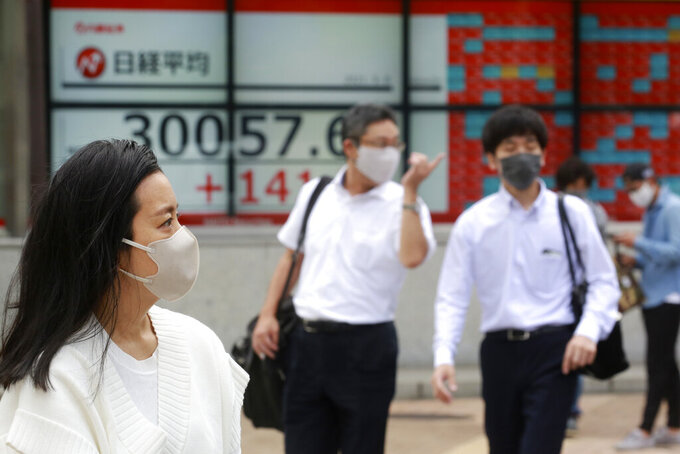 Koji Sasahara, ASSOCIATED PRESS
People walk by an electronic stock board of a securities firm in Tokyo, Wednesday, Sept. 8, 2021. Stocks were mixed in Asia on Wednesday after Wall Street closed mostly lower as traders returned from the Labor Day holiday. (AP Photo/Koji Sasahara)

Stocks were mixed in Asia on Wednesday after Wall Street closed mostly lower as traders returned from the Labor Day holiday.

Shares rose in Tokyo, Hong Kong and Shanghai but fell in Seoul and Sydney.

Japan's growth for April-June was revised up to an annual pace of 1.9% from a preliminary estimate of 1.3%.

The ruling Liberal Democratic Party is due to elect a new prime minister to succeed Yoshihide Suga, adding to uncertainty over future policy, more stimulus for the economy is expected in the coming weeks, analysts say.

In New York, gains for some Big Tech companies nudged the Nasdaq composite barely higher to another record, while the benchmark S&P 500 slipped 0.3%, breaking two weeks of gains. The Dow industrials lost 0.8%.

The yield on the 10-year Treasury note climbed to 1.37%, while oil prices rose after falling overnight.

The pullback in stocks came as traders returned from the Labor Day holiday weekend to a relatively light week of economic data. The last big economic snapshot, the August jobs report, came in weaker than expected last Friday, but stocks only slipped modestly on the news.

“We’re still kind of digesting Friday’s weak job number and the potential impact that might have with the economy,” said Ryan Detrick, chief market strategist for LPL Financial.

Volatility is expected to pick up in the coming days and weeks, after stocks churned higher throughout the summer, helped by stronger-than-expected earnings from big companies and guidance from the Federal Reserve that the central bank plans to keep interest rates low.

Investors have a few economic reports on tap for the week.

On Wednesday, the Labor Department will report job openings for July. The jobs market is still struggling to recover from the pandemic and employers have been finding it difficult to fill openings amid lingering health fears and the resurgent virus could make it even more difficult.

On Friday, investors will get another update on inflation when the Labor Department reports on inflation at the wholesale level before costs are passed on to consumers.