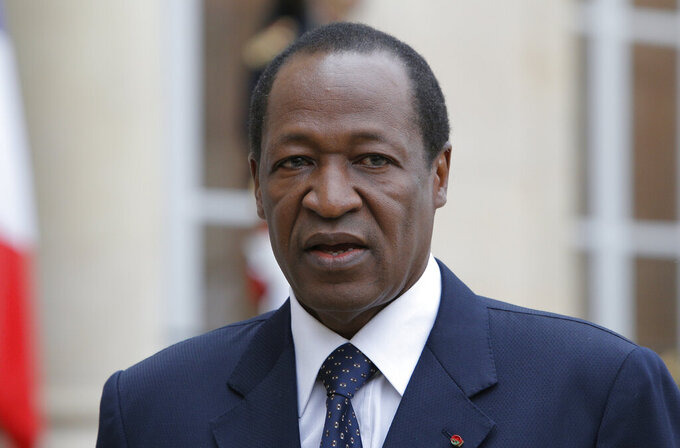 Francois Mori, ASSOCIATED PRESS
FILE - Burkina Faso President Blaise Compaore speaks to the media after a meeting with France's President Francois Hollande at the Elysee Palace in Paris, Sept. 18, 2012. Compaore, who was ousted in a popular uprising in 2014, returned to Burkina Faso for the first time on Thursday, July 7, 2022. (AP Photo/Francois Mori, File)

The former leader arrived at the Ouagadougou airport, according to Western diplomats and the Emir of Lipatko, a traditional leader.

Compaore, who's been in exile in neighboring Ivory Coast since 2014, came back to be part of an unprecedented meeting on Friday between the head of the junta that seized power in January and former heads of state to discuss Burkina Faso's future, said a statement by the government.

Compaore is to join past presidents Michel Kafando, Yacouba Isaac Zida, Jean-Baptiste Ouedraogo and Roch Marc Christian Kabore, according to the statement.

It’s unclear how long Compaore will stay in the country.

Friday’s meeting has been called by the ruling junta led by Lt. Col. Paul-Henri Sandaogo Damiba who seized power in a coup in January and has had himself appointed interim president.

Compaore, who seized power from his long-time friend and revolutionary leader Thomas Sankara in a 1987 coup, ruled Burkina Faso with an iron fist for nearly 30 years. He was known for both fuelling regional conflicts in West Africa and playing peacemaker, supporting warlords like Liberia’s Charles Taylor. However, Compaore was praised by the U.N. for contributing to peace and stability in Mali when the neighboring country was nearly overrun by jihadis a decade ago.

Compaore was ousted in 2014 after weeks of protests sparked by legislative proposals to remove term limits, which would have allowed him to extend his rule.

He was recently tried in absentia and sentenced to life in prison after being found complicit in Sankara’s murder in 1987 and for undermining state security. Lawyers for the Sankara family have called for his arrest upon arrival, said a statement issued earlier this week seen by The Associated Press.

The military junta said Friday’s meeting doesn’t “hinder legal proceedings” against some of those attending, but didn’t elaborate on what that meant.

Compaore’s return is controversial and a step backward for the conflict-riddled nation, say conflict analysts.

“As much as current authorities are trying to make this look like part of reconciliation efforts, it also sends the wrong message,” said Rida Lyammouri, senior fellow at the Policy Center for the New South, a Moroccan-based organization.

“Removing Blaise from power in 2014 was celebrated as a victory against an authoritarian regime, but his return is yet another step back in Burkina Faso and its fight for a better democracy,” said Lyammouri.

Compaore’s return and the unusual gathering of former leaders is a move by the ruling junta to increase its legitimacy and to get the influential former leaders to endorse its agenda, said a European diplomat in Burkina Faso who insisted on anonymity because he was not authorized to speak to the media.

Junta leader Damiba came to power promising to secure Burkina Faso from jihadi violence but is struggling to stem the increasing insurgency. Friday’s meeting is the latest of a series of initiatives to strengthen military operations and improve relations with neighboring countries and the international community.

Last week the junta agreed to a 24-month transition period to elections starting from July, reducing its original timeline of three years, which prompted the 15-nation West African regional bloc, ECOWAS, to drop its threat of sanctions.

Some residents tired of the current violence, see Compaore’s return as a chance to move the nation forward.

“We, the traditional and customary leaders, seek national reconciliation, social cohesion and peace. This is the best security for all,” Ousmane Amirou Dicko, the Emir of Liptako, told AP. “We are not for the spirit of revenge.”