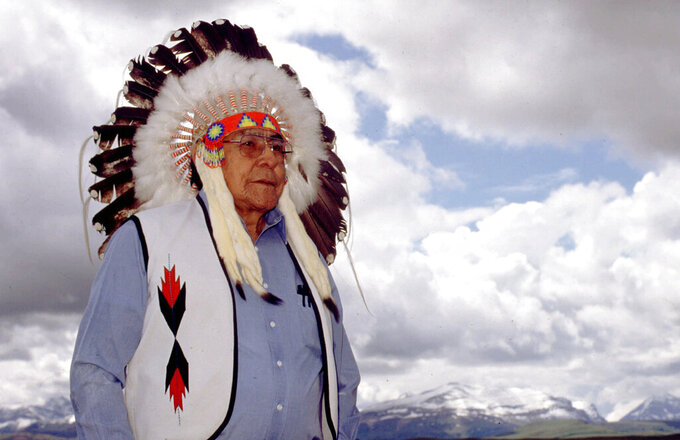 Stuart S. White, ASSOCIATED PRESS
FILE - Earl Old Person, chief of the Blackfeet Nation in Browning, Mt., wears a ceremonial headdress at his home overlooking the Rocky Mountains near Glacier National Park, Mont., on June 9, 1998. Old Person had been on the tribal council on and off since the 1950s and was named chief in 1978. Old Person died Wednesday, Oct. 13, 2021, in Browning, after a long battle with cancer, the tribe said. He was 92. (Stuart S. White/The Great Falls Tribune via AP, File)

BROWNING, Mont. (AP) — Funeral services for Blackfeet Chief Earl Old Person are set for Friday morning, with other opportunities to pay respects to the longtime leader during the week.

On Tuesday afternoon, Old Person will be brought to the Blackfeet Tribal Conference Room for a walk-through viewing, tribal officials said.

On Wednesday afternoon, he will be escorted to the Browning High School gym where he will remain until his funeral at 11 a.m. Friday. A special church service is planned for 7 p.m. Thursday.

Old Person served for more than 60 years on the Blackfeet Tribal Business Council and was chairman of the council for more than 50 years. He has been the tribe's chief since 1978.

Old Person worked to preserve the tribal language, music and traditions and fought to block oil and gas development in the Badger-Two Medicine area, which is south of the Blackfeet Reservation and sacred to the tribe.