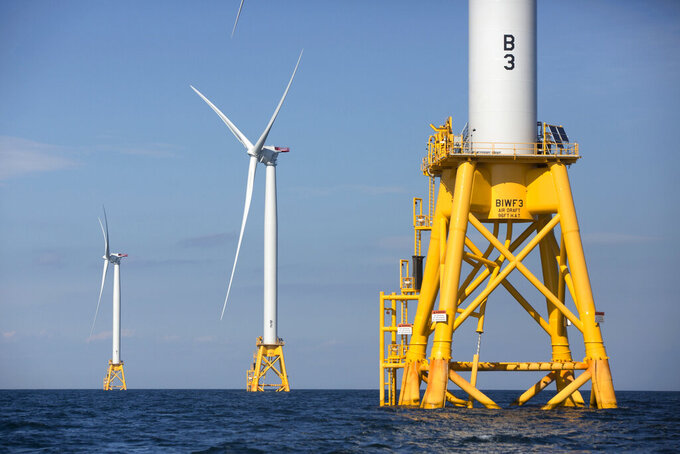 The agency that oversees offshore leases will publish a request for interest Friday in the Federal Register, for areas off Louisiana, Texas, Mississippi and Alabama, the Interior Department said Tuesday.

Those areas are largely in shallower waters where many wells have played out rather than the deep seas where the Gulf's offshore oil and gas industry is now focused.

Biden has said he wants enough wind-generated electricity for more than 10 million homes nationwide by 2030.

Offshore wind development has the potential to create tens of thousands of good-paying, union jobs across the nation, said Interior Secretary Deb Haaland.

Her agency's request for interest from developers "is an important first step to see what role the Gulf may play in this exciting frontier,” she said.

“The Gulf of Mexico is extremely well-positioned for the exploration of new offshore technologies and energy opportunities,” said Erik Milito, president of the National Ocean Industries Association, which includes companies building both wind and oil and gas facilities offshore.

“Whether we are talking about offshore wind or other renewables such as hydrogen, expanding the energy portfolio of the Gulf of Mexico will depend upon a robust offshore oil and gas industry,” he said in an emailed statement.

Offshore oil and gas companies are building wind farms in the Atlantic, Milito said. He said he expects the government proposal to generate interest, but companies will need time to study and understand the market.

Although the main focus is on wind energy, the Bureau of Ocean Energy Management is also seeking information on other renewable energy technologies, the Interior Department said.

As part of the Biden administration's push for renewable energy, the Department of Energy has $3 billion in loan guarantees available to support offshore wind. It also has pledged $500 million to improve ports from which the huge turbines would be hauled out to sea.

California and the U.S. government announced an agreement last month to open up areas off that state's coast to the Pacific coast's first commercial wind energy farms, using floating turbines.

And in March, the Interior Department published a four-volume environmental impact statement for a proposed huge wind farm off Martha's Vineyard in Massachusetts. That was a crucial step toward a decision on whether to approve what would be the nation's first commercial-scale offshore wind power development.

Friday's publication will start a 45-day public comment period about developers' interest, potential environmental consequences and other uses of the proposed area. Those will be considered in deciding the next steps in renewable energy leasing in the Gulf of Mexico, the news release said.

Milito said, “Our members are already figuring out how to diversify their Gulf of Mexico energy portfolio, through avenues like hydrogen production and carbon capture and storage, and there already is a natural fit with wind projects.”

The government has leased about 1.7 million acres in the Outer Continental Shelf for offshore wind development and has 17 commercial leases on the Atlantic, from Cape Cod to Cape Hatteras, the Interior Department said.

A Gulf of Mexico Intergovernmental Renewable Energy Task Force, made up of federal, tribal, state and local governments from the four states, will hold its first meeting June 15. The group will help coordinate planning, solicit feedback and exchange scientific and process information, officials said.