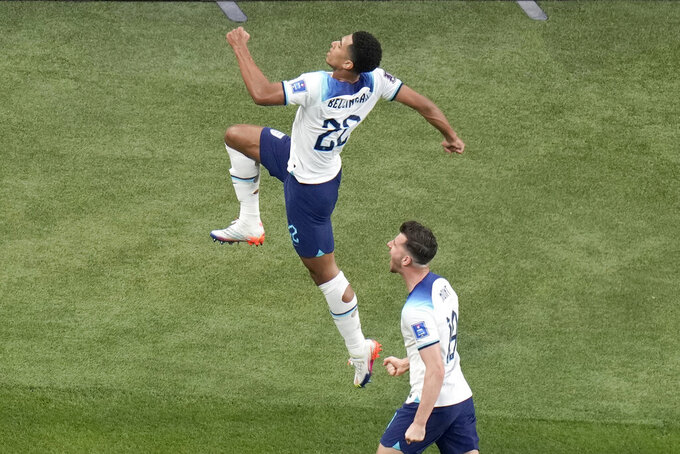 That was partly because of the adrenaline after the 6-2 rout of Iran on Monday — but also the sheer amount of congratulatory messages he received.

The 19-year-old midfielder took to the biggest stage in world soccer like a veteran, with a dominant display that justified his status as one of the most exciting prospects on show in Qatar.

“It is difficult to sleep,” he said Tuesday. “I was up all night trying to reply to messages and speak to people about the game.

“I’m kind of just coming down from the high now and focusing on the next game. I’m just trying to keep my feet on the ground.”

Bellingham’s level-headedness is one of his greatest strengths at such an early age and seen him establish himself at the heart of the team for England and his club Borussia Dortmund.

It has also set the stage for an anticipated battle for his signature next summer, with Europe’s leading clubs poised to move.

While he is trying to remain humble, there is no shortage of figures in the game lining up to praise his prodigious talent.

Manchester City manager Pep Guardiola has publicly enthused about him.

Manchester United great Alex Ferguson tried to convince Bellingham to move to Old Trafford when he left Birmingham at age 17.

England teammate Marcus Rashford is another who has been impressed by the speed of his development.

“He is really mature, and for me it shows in his performances,” the forward said. “He didn’t put a foot wrong, and he was here, there and everywhere yesterday.”

“The authority that he plays with on the pitch goes well beyond his years,” he told the BBC. “He’s a fabulous footballer, but delivering at a World Cup like that at that age.

“We talk about the great midfielders that we’ve played with and seen in England in our generation. None of them were doing what he’s doing at this age, on this stage.”

His hometown club Birmingham clearly thought Bellingham was destined to achieve huge success when deciding to retire his jersey after only 44 senior appearances.

It is extremely rare for soccer teams to bestow that honor on players — especially ones so young.

Yet Bellingham has been a player who has belied his years from the moment he made his full debut at 16.

“I always dreamed that I would be here, I never thought it would be this early in all honestly,” he said. “I have been given the opportunity to do things that a lot of people haven’t had in full careers which makes me so grateful.”

For all his maturity on the field, the sheer joy he felt after that first goal for his country came out when recalling it.

“I can’t stop smiling,” he said. “I’ve scored quite a few goals this season, in some pretty big games, but that tops anything that I have ever scored. That feeling thinking, have I really just done that? I was thinking this can’t be real.”