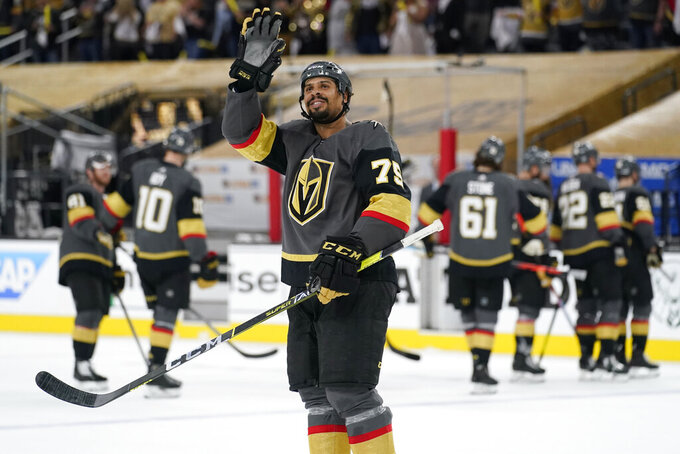 Shea Theodore had a goal and an assist, Marc-Andre Fleury made 28 saves and the Golden Knights beat the Montreal Canadiens 4-1 in the first game of the Stanley Cup semifinal.

Theodore’s first-period goal gave Vegas a 1-0 lead and marked the first time the Canadiens trailed in a span of 437 minutes and 53 seconds, the NHL’s second-longest playoff run.

“The first goal was huge, and at the right time too in the first period for us with how we were playing,” Vegas coach Peter DeBoer said. “Gave us a little bit of an opportunity to take a deep breath and kind of gather ourselves and find our game. Thankfully (Fleury) was our best player, gave us a chance to get our legs, and then I really liked our game in the second and third.”

Fleury, whose 90th career playoff win leaves him two shy of tying Grant Fuhr for third place all-time, has now allowed two or fewer goals in nine of his 13 playoff appearances this season.

Alec Martinez, Mattias Janmark, and Nick Holden also scored for the Golden Knights, who were vividly fueled by an announced crowd of 17,884 glow-stick waving fans.

The goal from Theodore, Martinez, and Holden marked the first time this postseason a team got three goals from defensemen in a single game.

“We talked about making sure the (defensemen) were getting up in the play to make sure we had good gaps if pucks were turned over, but ended up being that we were able to jump and get some pucks and obviously score some goals and make some plays,” Holden said. “That’s always big when you can get contributions from different places.”

It marked Montreal’s first game in the United States since March 7, 2020, when it visited the Florida Panthers. It was also the Canadiens’ first game with more than 2,500 fans in attendance since March 10, 2020, when they hosted the Nashville Predators in front of 21,021 fans inside Bell Centre.

“Obviously we were very excited to play,” Canadiens defenseman Joel Edmundson said. “I thought we came out firing in the first period, and then we kind of just sat back and let them come at us. But we were excited to play in front of a sold-out barn again.”

Montreal certainly came out swinging, literally, with an introduction to old-school, Original Six physicality. Looking to establish their presence, and show no signs of intimidation of the highest remaining seed in the postseason, the Canadiens pushed and shoved their way into Game 1.

Alexander Romanov opted to flatten Alex Pietrangelo, who was streaking into the offensive zone, rather than play the puck. Brendan Gallagher crowded Fleury upon stoppage, prompting the Vezina Trophy candidate to pop up in retaliation mode. Corey Perry exchanged words with former Montreal captain Max Pacioretty just before a faceoff, then gave him an extra shove when the puck dropped. Then it was Brett Kulak and Pietrangelo getting tangled up after a whistle.

It took a couple of hard hits of their own, but the Golden Knights muscled up with a rugged shift midway through the opening period that led to a draw in their offensive zone. Chandler Stephenson won the faceoff to the left of Price, with the puck ending up with Brayden McNabb, who found Theodore, who proceeded to launch a rocket from the blue line to give Vegas a 1-0 lead.

Looking as if he was going to tee off from the point early in the second period, Theodore drew back his stick to pull Price toward the front of the crease, then dished to his right, where Martinez was in position with a wide-eyed look for a one-timer.

“I was gonna shoot it and he was yelling at me pretty good and he was wide open too so it definitely helped,” Theodore said.

The Canadiens finally scored when Caufield, who was given the Hobey Baker Award as the top collegiate player in April, snapped home a power-play rebound from the left circle, catching Fleury out of position after an initial save.

With a thunderous chant of “Fleury’s better!!!” reverberating behind Perry, Reilly Smith sent a gorgeous pass through the zone to Holden, who fired a wrist shot blocker side to put Vegas ahead 4-1 midway through the third period.

As Caufield was giving Montreal its first goal of the series, his parents showed tears of joy for good reason. With Canada’s COVID strict protocol, it marked the first time Paul and Kelly Caufield were able to see their son play in the NHL in person.

Golden Knights forward Tomas Nosek, sidelined since sustaining an undisclosed injury in Game 2 in the first round, missed his 12th straight game. Canadiens key defenseman Jeff Petry, who hurt his left hand in Game 3 against Winnipeg, did not play. Also out were Jake Evans (concussion) and former Golden Knight Jon Merrill (undisclosed).