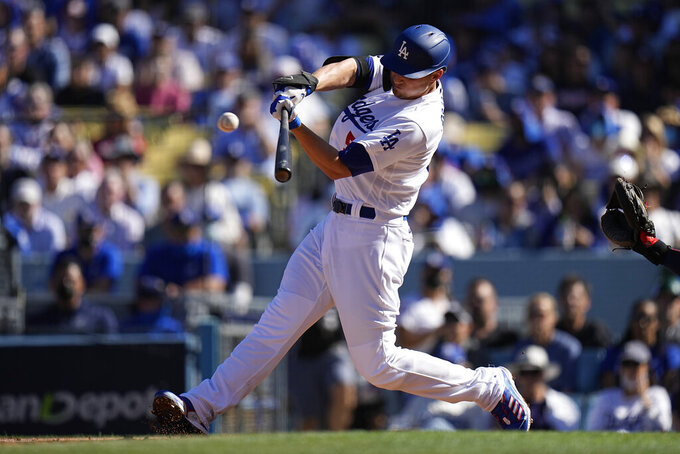 LOS ANGELES (AP) — Andrew Friedman is headed into an offseason filled with crucial decisions involving the Los Angeles Dodgers’ big-name free agents, a rebuild of the starting rotation and Trevor Bauer’s future with the team.

As always, Friedman is guided by the ultimate goal of the monied Dodgers, saying, “The number one objective is to put ourselves in the best position to win in 2022.”

After coming within two wins of reaching the World Series for the fourth time in five years, the Dodgers' president of baseball operations defined the team's postseason as “our struggle to consistently score runs.”

“We needed someone to step up and pull an Eddie Rosario,” Friedman said, referring to the Atlanta Braves left fielder who was named MVP of the NL Championship Series.

“After we made the Trea Turner deal, in my opinion, one through eight, it was the deepest and best lineup I’ve been around. But it didn’t quite play like that over those two months. It was a little bumpier than I would’ve expected,” he said Wednesday. “Figuring out the why of that is the hard part.”

The turbulence began well before the postseason.

Reigning NL Cy Young Award winner Bauer went on paid administrative leave in early July under MLB’s joint domestic violence and sexual assault policy. MLB is conducting its own investigation and has yet to announce any findings. Bauer, through his representatives, has denied any wrongdoing.

Asked if Bauer will pitch for the team again, Friedman said they remain in the same position as before.

“It's being handled by the league office," he said. “Whatever they decide, we’ll have to figure out from there what makes the most sense for us."

If MLB suspends Bauer, it could create a domino effect on the team's payroll plans.

“The extent of it, I don't know yet,” Friedman said.

The Dodgers began the season with eight starters and tried to get through the postseason with just Walker Buehler, Max Scherzer and 20-game winner Julio Urías. The lack of depth was exposed by the team’s decisions to use Scherzer in relief in Game 5 of the NL Division Series and Urías out of the bullpen in Game 2 of the NLCS that left both pitchers tired in their later starts.

Friedman and the front office have decisions to make on such key veterans as Scherzer, Clayton Kershaw, Corey Seager, Kenley Jansen and Chris Taylor, who will become free agents after the World Series.

“We’ll do everything we can to keep as many of this group together,” Friedman said, “but not standing in the way of a great opportunity and I’m sure there will be for different people.”

Kershaw, the 33-year-old three-time Cy Young Award winner, reinjured his left arm not long after returning from over a two-month absence for the same issue and wasn't available to pitch in the postseason.

“He just wants to feel good again and get to the point where he's healthy,” Friedman said.

Kershaw has spent his entire 14-year career in Los Angeles, where he's been the longtime face of the franchise.

“There's something nostalgic and great about Kersh playing for one team and winning another championship and having a parade,” Friedman said.

Offseason moves would be impacted if no agreement on a collective bargaining agreement is reached before the current deal expires Dec. 1.

“We need to be prepared accordingly,” Friedman said.