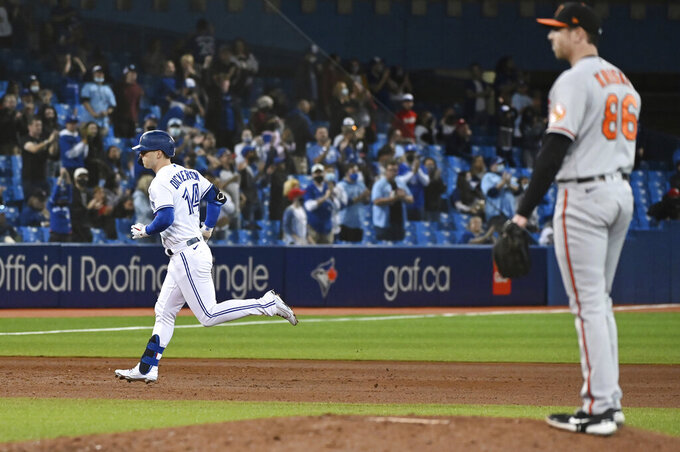 Toronto (89-71) and Seattle are tied, one game behind Boston for the second AL wild-card spot. The New York Yankees still occupy the first wild-card slot, one game ahead of the Red Sox.

The Orioles put a scare into the Blue Jays with a four-run eighth, but closer Jordan Romano limited the damage as he got the final five outs for his 23rd save in 24 chances.

Jansen hit a two-run homer off Thomas Eshelman (0-3) in the third inning, his 10th, and Corey Dickerson added a solo shot off Brooks Kriske in Toronto’s four-run sixth.

The Blue Jays lead the majors with 253 homers this season, four shy of the club record set in 2010.

Dickerson’s blast was the first of five straight two-out hits by the Blue Jays. Santiago Espinal and Jansen hit back-to-back doubles, and Cavan Biggio singled and took second on a throw. George Springer followed with an infield single, and Biggio raced home ahead of second baseman Pat Valaika’s throw to give Springer his 500th career RBI.

Matz (14-7) allowed two runs and six hits, walked one and struck out five in his longest outing of the season. The left-hander is 5-0 with a 2.90 ERA in nine starts since his last loss, Aug. 10 against the Angels.

“He was outstanding,” manager Charlie Montoyo said. “He was probably the main reason we won this game.”

“That was the best I’ve seen him throw in a long time, just the command, how aggressive he was in the strike zone,” Hyde said. “He had a really good breaking ball. He made it really tough on our hitters.”

Toronto turned double plays behind Matz in the third, fourth and fifth innings.

“I felt good about my stuff today,” Matz said. “Really, the name of the game all year for me has been fastball-changeup and working off that stuff. Today I had the curveball going as well.”

Kelvin Gutierrez spoiled Matz’s shutout bid with a leadoff homer in the eighth. After Tyler Nevin walked on a 3-2 pitch, Matz left to a standing ovation from the crowd of 28,855.

“That was awesome,” Matz said.

Valaika greeted reliever Adam Cimber with a two-run homer, cutting it to 6-3. Richie Martin grounded out, Cedric Mullins was hit by a pitch, and Cimber left after Ryan Mountcastle singled.

“We were one hit away there from making it really interesting,” Hyde said.

“They attacked right from the beginning,” Eshelman said.

Jansen is batting .327 with five homers and 16 RBIs in 19 games since being activated off the injured list Aug. 31.

The Orioles have lost 18 of their last 22 away from home.

Baltimore recalled RHP Isaac Mattson from Triple-A Norfolk and optioned LHP Alexander Wells, who made his final start of the season in Thursday’s win over Boston.