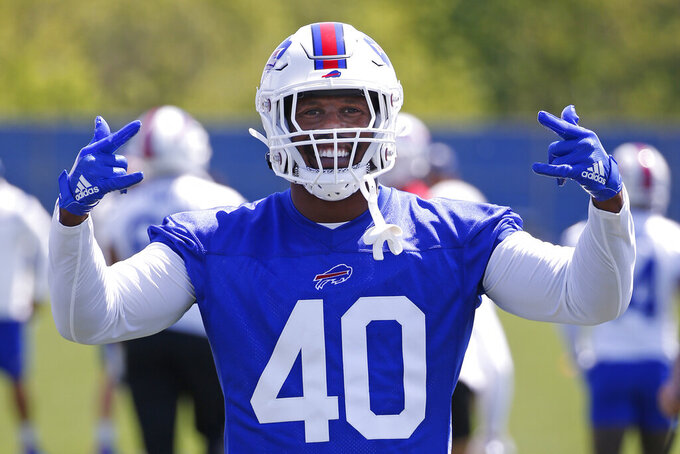 ORCHARD PARK, N.Y. (AP) — For someone who acknowledged being torn over leaving a Super Bowl champion and the bright lights of Los Angeles for Buffalo, Von Miller certainly looked at home wearing a Bills helmet in making his practice debut on Tuesday.

Whether it was grooving to the music on the sideline, playfully posing to a photographer, providing tips to second-year defensive end Greg Rousseau or bursting off the line in forcing Josh Allen out of the pocket, Miller’s presence was apparent during the second day of the Bills’ voluntary workouts.

“My first impression of him from him wearing the same jersey is outstanding and thankful,” left tackle Dion Dawkins said. “I’m thankful to have him.”

All it took to wow Dawkins was catching a glimpse of the 33-year-old Miller during the stretching portion of practice.

“He’s like a gymnastics person, where he’s just real fluid. Almost like water,” Dawkins added. “That’s the most impressive thing, that he can move his body in certain ways that I can’t for sure.”

Two months after leaving the Rams to sign a six-year contract with the two-time defending AFC East champions in free agency, the Von Miller effect formally took root on a talented Buffalo team with championship aspirations.

With Allen overseeing a potent offense, Miller adds muscle to what had been the NFL’s top-ranked defense but with a middling pass rush last season. He’s a two-time Super Bowl champion who leads active players with 115 1/2 sacks, including 9 1/2 a year ago, plus four more in the playoffs.

Miller, who wasn’t made available to reporters following practice, previously said he wouldn’t have left L.A. for any team but Buffalo because of the collection of talent assembled.

“When I was on the plane to fly here and sign my contract, I was like, 'Bro, I’m coming here to tell them that I’m going back to L.A.,” he said with a laugh last month. “Then I got here and I sat down with all the guys and, man, I just felt at peace. I felt like this was the place.”

It was then, when Miller began looking forward to his first practice.

“I’m excited to go. I’m ready to go win a Super Bowl for the Buffalo Bills,” he said.

Miller, meantime, immediately becomes the focal point of a young and developing group of pass rushers made up of second-year players Rousseau and Boogie Basham, third-year player A.J. Epenesa, as well as Shaq Lawson, a free-agent addition who returns to Buffalo for a second stint.

Coach Sean McDermott on Tuesday placed an emphasis on his young pass rushers to make a larger impact.

“This is going to be a big offseason for those guys,” McDermott said, referring specifically to Rousseau, Basham and Epenesa. “I mean, they’re in a position where we need them to really, really grow and develop and make a mark on our defense — and not just in a supporting role, but in a primary role.”

Rousseau, who had four sacks as a backup last season, is the projected candidate to start opposite Miller. Though players practiced in shorts and without pads, the duo showed flashes of their disruptive potential by collapsing the pocket during a team drill.

“I feel that we’re going to learn a lot from him. We already have been learning from him,” Rousseau said, of Miller pulling him aside and providing pointers. “So I’m excited to go out there each and every day and practice with a Hall of Famer.”

Whomever lines up opposite Miller should benefit from facing more one-on-one situations, with opposing offenses expected to focus their blocking attention on the other side.

That’s something the Bills lacked last season, and led to them not re-signing Jerry Hughes and Mario Addison, after they combined for just nine sacks.

Buffalo finished tied for 11th in the NFL with 42 sacks, though 14 of them came in the final two weeks of the season in wins over Atlanta and the New York Jets.

“Whatever they want me to do, I’m going to be able to get it done,” Miller said, before discounting questions of his age entering his 12th NFL season.

“This is a six-year deal so I’m looking forward to playing the whole thing out,” Miller added. “I’m a real sicko when you get to know me. My mindset is different.”

NOTES: McDermott acknowledged starting safety Jordan Poyer’s absence from the voluntary sessions is contract related by saying “business is business right now.” Poyer is entering the final year of his deal and recently changed agents by hiring Drew Rosenhaus. McDermott said he and Poyer had a brief chat while the player attended fellow safety Micah Hyde’s charity softball tournament in Buffalo last week. ... Without going into detail, McDermott said offensive lineman Spencer Brown is sidelined after having a procedure, while tight end Dawson Knox is also dealing with an injury. Both are expected to be ready for the start of training camp in July.