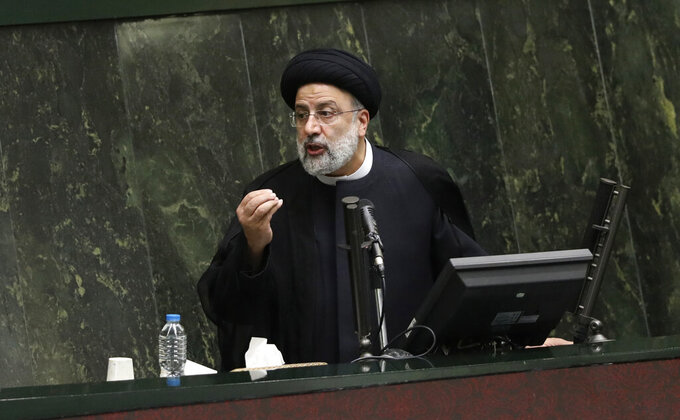 Lawmakers voted in favor of 18 of 19 ministers proposed by Raisi after five days of hearings and discussions.

They did not approve Hossein Baghgoli, nominated for education minister, whose experience was disputed during hearings. He received 76 votes out of 286 present lawmakers. The chamber has 290 seats.

Raisi had appealed to lawmakers to vote quickly to approve his nominees so the government can get to work dealing with the pandemic and economic situation in the country suffering from years of sanctions by the U.S.

Raisi has said his foreign policy will focus on engagement with all nations and the removal of sanctions. New Foreign Minister Hossein Amirabdollahian, who received 270 votes from lawmakers, said his ministry “would not run away from the negotiating table” and will do its best to remove all sanctions against the country.

Amirabollahian, 56, has served in a range of administrations over the decades. He was deputy foreign minister for Arab and African Affairs under former populist hard-line President Mahmoud Ahmadinejad, known in the West for his Holocaust denial and disputed re-election in 2009.

When relative moderate President Hassan Rouhani entered office in 2013, Amirabollahian kept his job before leaving to become an international affairs adviser to the former Parliament speaker. Rouhani struck the nuclear deal with world powers that granted Iran sanctions relief in exchange for curbs on its nuclear program.

In a hearing in Parliament on Sunday, Amirabdollahian said negotiations must guarantee the rights of the Iranian people. The diplomat also welcomed friendship with neighboring countries, especially with Iran’s regional rival Saudi Arabia “for the benefit of the whole region.”

Former foreign minister Mohammad Javad Zarif congratulated Amirabdollahian on his confirmation. “Wishing him, the ministry and its officials, and the new administration, all success in international relations,” Zarif said in a tweet.

Javad Owji, 54, a career technocrat and long-time official in the country’s vital oil and gas sector, received 198 votes to work as oil minister. Exporting crude is a major foreign source of revenue for the nation.

During the Parliament hearing, Owji promised to apply an “active attitude for bypassing sanctions” and use of the private sector in “exporting crude.”

The Cabinet list included no women, few surprises and several officials from Iran’s paramilitary Revolutionary Guard. The supreme leader also typically weighs in on picking officials for the most sensitive positions, such as foreign minister.

The parties to the nuclear accord have met in Vienna for months to try to revive the deal. The last round of talks ended in June with no date set for their resumption. Raisi has promised his administration will focus on lifting sanctions that have clobbered Iran’s already ailing economy.

Meanwhile, Gen. Ahmad Vahidi was confirmed Wednesday as the interior minister with 266 votes.

Vahidi is a former defense minister blacklisted by the U.S. in 2010 and wanted by Interpol over his alleged role in the 1994 bombing of a Jewish cultural center in Buenos Aires. The attack killed 85 people and wounded hundreds.

Vahidi also served as commander of Iran’s expeditionary Quds Force in the late 1980s, responsible for Tehran’s proxies across the Middle East.

Later in the day, Raisi expressed gratitude to parliamentarians for their votes.