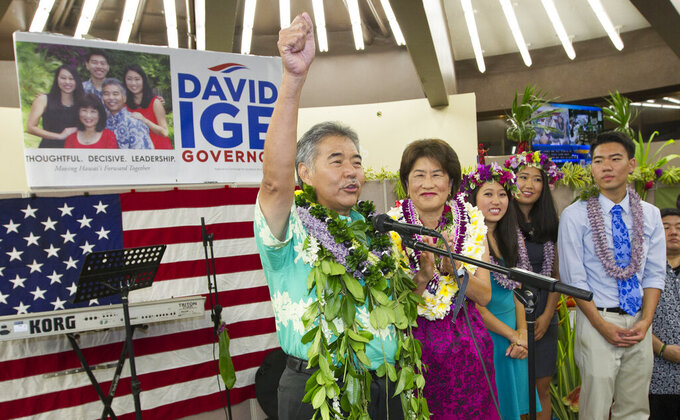 Eugene Tanner, ASSOCIATED PRESS
FILE - Then-Hawaii State Sen. David Ige, center, addresses his supporters at his campaign headquarters on Aug. 9, 2014, in Honolulu as his family looks on. As Hawaii's governor, David Ige faced a false alert about an incoming ballistic missile, a volcanic eruption that destroyed 700 homes and protesters blocking construction of a cutting-edge multibillion-dollar telescope. Crisis response are two words that could sum up the Democrat's eight years leading Hawaii, which are due to wrap up when his successor Lt. Gov. Josh Green is inaugurated on Dec. 5, 2022. (AP Photo/Eugene Tanner, File)

HONOLULU (AP) — As Hawaii's governor, David Ige faced a volcanic eruption that destroyed 700 homes, protests blocking construction of a cutting-edge multibillion-dollar telescope and a false alert about an incoming ballistic missile. During the COVID-19 pandemic, tourism shut down and Hawaii's unemployment rate soared to 22.4%.

Crisis response is one way to sum up the Democrat's eight years leading Hawaii, which are due to wrap up when his successor, Lt. Gov. Josh Green, is inaugurated on Dec. 5.

“It’s stressful, especially during public health emergencies," Ige said during a recent interview reflecting on his two terms in office. “There are people who don’t like what you do and they don’t like decisions made. And today, they can let you know that.”

Yet the 65-year-old former electrical engineer said that he agrees with other governors who told him shortly after his 2014 election that he was about to get the best job he could ever have.

“You have direct impact on the quality of people’s lives. What we do matters to people every single day,” Ige said.

Ige cited progress he made on affordable housing and homelessness. But he's most proud of how he responded to the pandemic, and it's what he'd like to be remembered for after he leaves.

A report by the Commonwealth Fund, a New York-based nonprofit foundation, found Hawaii had the lowest “excess mortality” rate among the 50 states, a statistic measuring deaths that exceed historical norms for a given time and place. Ige said that Hawaii's health care system was always able to care for both COVID-19 patients and others throughout the pandemic.

Ige said that he wanted to protect Hawaii's older people and the health and safety of residents. He didn’t want Hawaii’s hospitals to be overwhelmed, since people would have difficulty getting medical care from a neighboring state.

“We knew that it’s not about driving somebody to the next county or flying somebody to get services. We’re 2,500 miles away from anywhere,” Ige said.

Ige signed executive orders that required wearing masks in public and limiting the size of gatherings. Unique among the 50 states, Hawaii imposed a 14-day quarantine on incoming travelers and actively enforced it. This order effectively shuttered the state's tourism industry, which is a key economic driver, but officials believe that it also slowed the spread of COVID-19.

Kirk Caldwell, who was Honolulu's mayor when the pandemic began, said that Ige was under “huge pressure” from people urging him to impose public health protections faster. Later, people pushed him to ease up as conditions improved.

Honolulu City Councilmember Andria Tupola, who ran against Ige as the Republican nominee for governor in 2018, praised Ige's even temperament and acceptance of criticism. But she said that he should have shared power with state legislators or held public hearings instead of issuing COVID-19 executive orders for two years.

“You got to pull back and you got to wean yourself off of making all the decisions, and then start to trust that other leaders collectively can join in the decision making,” she said.

Hawaii House Speaker Scott Saiki, a Democrat, said that Ige’s cautious approach contributed to both successes and failures. It was important for Ige to avoid making hasty decisions and to not overreact during the pandemic, but too often the governor suffered from "analysis paralysis,” he said.

“There were so many times when we wanted him to just take control of the situation, and provide some leadership and direction," Saiki said. "And it just didn’t happen.”

Lawmakers stepped in on multiple occasions to take on roles that one would expect of the executive branch.

Saiki pointed to how the Legislature mobilized volunteers to help the state process unemployment insurance claims pouring in during the pandemic. He also said that lawmakers worked with Honolulu hospitals to set up two COVID-19 mass vaccination clinics.

There's also the Thirty Meter Telescope project. The prolonged standoff over its construction on the summit of Mauna Kea, a place many Native Hawaiians consider sacred, deepened community divide.

The House later created a working group that developed recommendations for a new approach to managing Mauna Kea, leading to legislation that Ige signed.

The governor said that he regularly evaluated his response to emergencies and tried to adjust.

“It’s always about being focused on priorities to help you make decisions, and then doing what’s best for the community,” he said. “I’ve tried to make sure that we maintain that focus.”

Kauai Mayor Derek Kawakami said that he admired Ige's ability to handle difficult situations and criticism with grace. He said he aspired to be that kind of leader.

“I’ve just seen a person that was willing to stand in the middle of a storm, wake up every single day and give it his all,” Kawakami said.

Ige didn't deflect responsibility in 2018 when the Hawaii Emergency Management Agency, or HIEMA, terrified residents by accidentally sending an alert across airwaves and cell phones saying that a ballistic missile was heading to the islands.

Caldwell said that a more typical politician would have found someone to blame, fired them and swiftly stepped away from the issue.

After an internal investigation, the employee who sent the alert was fired . Ige wouldn't be pressured by the public or the media into rushing a decision, Caldwell said.

“He’s the most non-politician politician that I’ve come across in my time as mayor,” Caldwell said.

Once out of office, Ige hopes to exercise more, boosting his once-weekly runs to three to four times a week.

He plans to take some software development classes and looks forward to visiting his children living in California and Washington state.

He’s not interested in serving in Congress and doesn’t plan to run for another elected office. He said that he enjoyed his time as governor.

“I worked very hard to do the right thing in the right way on behalf of the community,” he said.