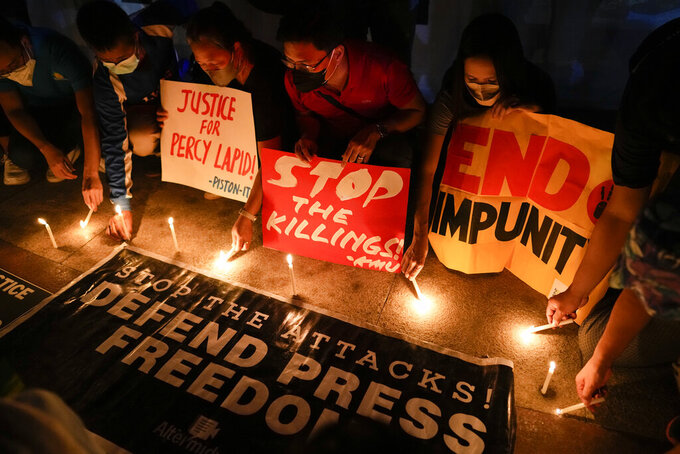 Aaron Favilla, ASSOCIATED PRESS
FILE - Activists light candle beside slogans as they condemn the killing of Filipino journalist Percival Mabasa during a rally in Quezon city, Philippines on Oct. 4, 2022. The Philippine justice secretary says Nov. 18, 2022 the top prison official, who is accused of plotting the killing of a radio journalist, also ordered a huge hole dug at the country's main prison to search for rumored buried treasure. (AP Photo/Aaron Favila, File)

MANILA, Philippines (AP) — The Philippines' top prison official, who is accused of plotting the killing of a radio journalist, also ordered a large hole dug at the country's main prison to search for rumored buried treasure, the justice secretary said Friday.

Bureau of Corrections Director General Gerald Bantag has faced a series of unusual allegations since being suspended last month, including the breeding of horses and snakes at the overcrowded prison complex at the southern fringe of metropolitan Manila and neglect resulting in the bodies of 176 prisoners piling up at a funeral home.

Following Bantag's suspension, authorities discovered a huge pit dug by backhoes in the prison complex in Muntinlupa city with what appeared to be a shallow tunnel at the bottom.

Bantag told reporters he ordered the hole dug as part of a plan to build an extra-deep swimming pool to train prison personnel in scuba diving. The workers could then be used as rescuers in times of flooding and storms, he said.

But Justice Secretary Jesus Crispin Remulla said Bantag told him a few months ago that the excavation was part of a search for a fabled treasure supposedly buried by Japanese occupation forces under Gen. Tomoyuki Yamashita during World War II.

“I told him to stop it. It’s ridiculous,” Remulla told reporters, adding that the digging was a waste of government time and money. “He’s not there to seek treasure, you’re there to run the corrections department.”

Remulla said he didn't know whether any treasure was found and would launch an inquiry into the excavation, which has been halted, to determine if any law had been breached.

Bantag was suspended by President Ferdinand Marcos Jr. last month amid an investigation into the death of an imprisoned gangster, Jun Villamor, whom a confessed gunman identified as the person who asked him to kill radio commentator Percival Mabasa on Oct. 3 for 550,000 pesos ($9,650).

Three imprisoned gang leaders later told investigators they were ordered to kill Villamor by suffocating him with a plastic bag in prison so he would not identify the mastermind of Mabasa’s killing, officials said.

A man on a motorcycle fatally shot Mabasa as he was driving to a residential village. Mabasa had fiercely criticized Bantag and former President Rodrigo Duterte, who appointed Bantag, for alleged irregularities.

Criminal complaints have been filed against Bantag and a prison security official, along with Mabasa's confessed killer and the three gang leaders accused of killing Villamor in prison. Bantag has denied any involvement in the killings of Mabasa and Villamor and accused Remulla of fabricating criminal complaints against him.

When investigators went to a funeral home near the Muntinglupa prison to check on Villamor's remains, they reported discovering 176 unclaimed bodies of inmates who had been listed as having died of various illnesses such as tuberculosis, kidney failure and heart disease while Bantag was prisons chief.

Authorities have buried 10 of the bodies but are preparing to conduct autopsies on many others to confirm the causes of their deaths, Remulla said.