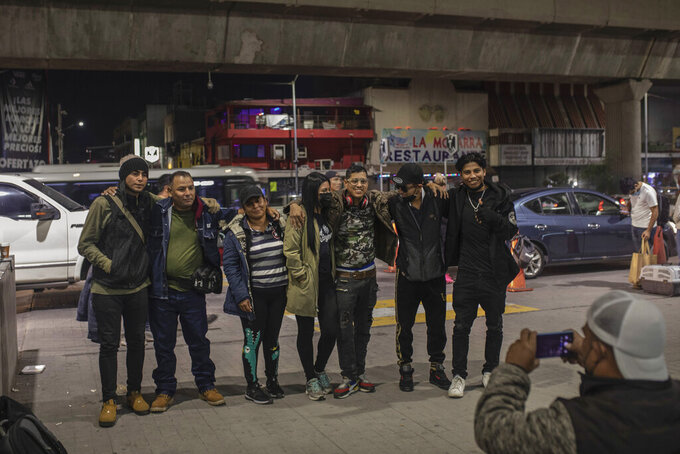 Felix Marquez, ASSOCIATED PRESS
A group of Nicaraguan and Guatemalan migrants who walked together in the recent caravan, take a group photo before traveling to the city of Mexicali from Monterrey, Nuevo Leon state, Mexico, Nov. 29, 2021, after obtaining the visitor's card for humanitarian reasons, which allows them to legally stay and move in Mexico for one year. The Mexican government has recently opted for a new strategy to relieve pressure on Tapachula, the city on its southern border with Guatemala where tens of thousands of migrants accumulate, and to deactivate the caravans that have emerged in recent months: grant humanitarian visas and offer transfers to other states. (AP Photo/Felix Marquez)

MEXICO CITY (AP) — Mexico announced a joint plan with the United States Wednesday to send development and agricultural aid to Honduras, Guatemala and El Salvador, to stem the wave of migration from those Central American countries.

While the joint plan announced Wednesday adopted a similar nameplate, ‘Sembrando Oportunidades,’ or ‘Planting Opportunities,’ it did not contain any specific funding commitments, nor any U.S. support for the Mexican forestry program.

The U.S. Agency for International Development called the plan “a new framework for development cooperation to address the root causes of irregular migration from northern Central America.”

Under the plan announced Wednesday, both countries will work through their own development aid agencies.

The most ambitious targets were set for Honduras, where the joint plan aims to reach as many as 500,000 young people, mainly through training programs and scholarships.

The two governments “plan to bring abilities and experiences to young people with the aim of guiding them into long-term employment, reducing the risk of irregular migration,” according to a statement released by Mexico's Foreign Relations Department.

Programs in Guatemala and El Salvador will seek to foment good business and governance practices, as well as providing aid.

Migrants from Central America have been showing up in increasing numbers at the U.S. border in recent years, seeking to immigrate.

There has been criticism in Mexico of the ‘Sembrando Vida’ forestry program, which pays farmers a monthly wage to plant and care for fruit or lumber trees.

Critics say the program has encouraged some farmers to cut down existing, natural forest to qualify for the payments.