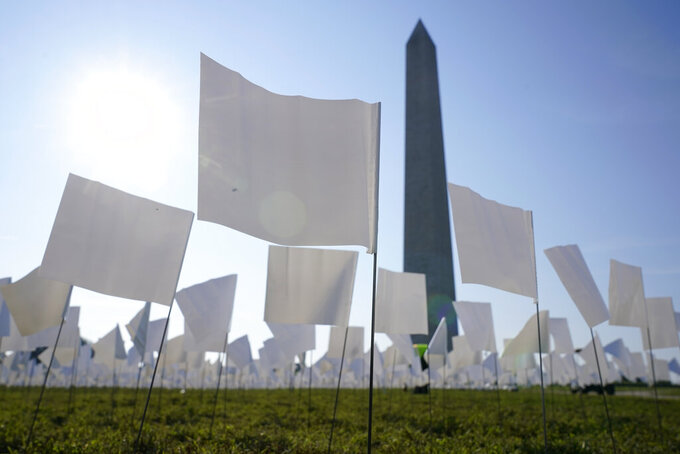 Patrick Semansky, ASSOCIATED PRESS
White flags stand near the Washington Monument on the National Mall in Washington, Wednesday, Sept. 15, 2021. The flags, which will number more than 630,000 when completed, are part of artist Suzanne Brennan Firstenberg's temporary art installation, "In America: Remember," in remembrance of Americans who have died of COVID-19. (AP Photo/Patrick Semansky)

ANCHORAGE, Alaska — Alaska is reporting its highest number of new coronavirus cases a day after the state’s largest hospital announced it had entered crisis protocol and started rationing care because of a flood of COVID-19 cases.

Officials on Wednesday reported 1,068 new virus infections, which is 13% higher than last week. State officials say 201 Alaskans are hospitalized for COVID-19, and 34 of them are on ventilators.

The state’s chief medical officer says hospitals continue to be stressed and there isn’t capacity for patients who have COVID-19 as well as those with other needs. Statewide, there are about 1,100 non-intensive care unit beds in hospitals, with only 302 available Wednesday. Only 21 of the state's ICU beds are open.

TORONTO — The leader of the Canadian province of Alberta is apologizing for his handling of the pandemic and says he is reluctantly introducing a vaccine passport and imposing a mandatory work-from-home order two months after lifting nearly all restrictions.

Alberta is declaring a public health emergency as Premier Jason Kenney says the province might run out of beds and staff for intensive care units within 10 days.

Indoor dining at pubs and restaurants is now banned.

Kenney says it is clear the provincial government was wrong to end public health restrictions in the summer. He says COVID-19 is hitting Alberta harder than anywhere else in Canada because it has the lowest rate of vaccination in the country.

RENO, Nev. — The Nevada Hospital Association is urging people to avoid going to emergency rooms except in true emergencies, especially in northern Nevada where a resurgence in coronavirus infections is running double the rate in the Las Vegas area.

Health officials say the 30-day average for daily new coronavirus cases per 100,000 residents has increased fivefold in the Reno-Sparks area over the past six weeks — from 354 at the beginning of August to 1,621 now. The statewide rate is 951, and it’s 720 in Clark County, which includes Las Vegas.

The head of the hospital association says that as a result, “many hospital emergency departments in northern Nevada are at capacity with patients.”

State officials said Wednesday that 1,090 people were hospitalized at the beginning of the week for confirmed or suspected cases of COVID-19, the disease that can be caused by the coronavirus.

HOUSTON — Some of the 15 Texas school districts that have been sued in the past week for defying Gov. Greg Abbott’s ban on mask mandates are pushing back against the lawsuits.

One school district said Wednesday it doesn’t have such a mandate and isn’t sure why it’s being sued. Another district that has made masks part of its student dress code said its requirement for face coverings has resulted in its schools having among the state’s fewest COVID-19 absences.

At least eight counties and cities and 87 school districts or systems in Texas have imposed mask mandates hoping to tamp down the pandemic, which has overwhelmed many of the state’s hospitals with COVID-19 cases.

The new initiative in the nation’s most populous county begins Oct. 7, with proof of at least one vaccine dose required. According to the county’s Department of Public Health, proof of full vaccination will be mandatory by Nov. 4.

Health officials strongly recommend the same precautions for indoor restaurants but have not chosen to mandate proof of vaccination for them.

The new restrictions come ahead of the holiday season, which brought a massive surge in infections to Los Angeles last year.

WASHINGTON — U.S. government advisers will debate Friday if there’s enough proof that a booster dose of Pfizer’s COVID-19 vaccine is safe and effective.

It’s the first public step toward deciding which Americans may get an extra dose and when. The Food and Drug Administration on Wednesday posted much of the evidence that it will ask outside experts to consider at Friday’s meeting.

But the agency struck a neutral tone in reviewing the data and discussing the rationale for boosters. That careful approach is notable given that White House officials have been previewing a booster campaign that they hoped to begin next week.

Pfizer is making the argument that while protection against severe disease is holding strong in the U.S., immunity against milder infection wanes somewhere around six to eight months after the second dose. The drugmaker is pointing to data from Israel, which began offering boosters over the summer.

The U.S. already offers an extra dose of the Pfizer or Moderna vaccines to people with severely weakened immune systems.

LJUBLJANA, Slovenia — Hundreds of anti-vaccination protesters hurled flares at the parliament building in the Slovenian capital on Wednesday to protest a new measure that mandates a COVID-19 pass for entering almost any shop, service or a workplace in the country.

Police responded with tear gas and water cannons. There were no immediate reports of injuries.

The small Alpine state has seen a surge in infections with daily cases exceeding 1,300 for two days in a row now, levels last seen in April, while the 14-day incidence per 100,000 population now stands at 533, one of the highest rates in Europe, the state STA news agency reported.

The COVID-19 pass is required for access to almost all services and workplaces and there have been reports throughout the day of store clerks being hassled, the agency reported.

Many complaints by disgruntled customers were targeted at petrol stations after the largest fuel retailer, Petrol, made it mandatory to show the pass — that mandates full vaccination or a COVID-19 test — before people could fill up their tank.

The pass is also mandatory for access to health services, except for emergency care. Community health centers have instituted a strict policy of compliance, while hospitals have offered on-the-spot testing for those who do not have it.

WASHINGTON — The U.S. government will spend $470 million to learn more about long COVID-19, its causes and potential treatments.

The National Institutes of Health announced the plans Wednesday with a grant awarded to NYU Grossman School of Medicine and a goal of enrolling up to 40,000 adults and children nationwide. The effort, dubbed RECOVER, will involve researchers at more than 30 U.S. institutions.

‘’This is being taken with the greatest seriousness… at a scale that has not really been attempted with something like this,’’ Dr. Francis Collins, NIH director, said at a briefing Wednesday.

Collins says its estimated 10% to 30% of people infected with COVID-19 may develop persistent, new or recurring symptoms that can last months or perhaps years.

Long COVID is an umbrella term for symptoms that linger, recur and show up for the first time four weeks or more after an initial infection. It also includes heart inflammation and multisystem inflammatory syndrome, a rare but serious condition that can occur in children after a COVID-19 infection.

Pain, headaches, fatigue, brain fog, shortness of breath, anxiety, depression, chronic coughs and sleep problems are among the reported symptoms of long COVID. Possible causes include the virus lingers in tissues and organs or it overstimulates the immune system.

WASHINGTON — Religious objections were once used only sparingly around the country to get exempted from various required vaccines. But some are using the loophole to avoid the COVID-19 shot.

About 3,000 Los Angeles Police Department employees are citing religious objections against the required COVID-19 vaccination. In Washington state, more than 3,800 state workers had requested religious exemptions. So far, 737 have been approved, but officials stressed that an exemption does not guarantee continued employment.

The administration acknowledges a small minority of Americans will use — and some may seek to exploit — religious exemptions. But it says even marginal improvements in vaccination levels will save lives.

It’s not clear yet how many federal employees have requested a religious exemption. The Labor Department has said an accommodation can be denied if it causes an undue burden.

ST. PAUL, Minn. — A Minnesota judge has rejected a request by concerned parents to force a stateside mask mandate in all schools.

Ramsey County District Judge Thomas Gilligan said the court was “gravely concerned” about the risks of COVID-19 for Minnesota children, but said in his ruling the court lacks the legal authority to order Gov. Tim Walz to issue the directive that the parents sought.

The longshot legal challenge was unique in that it sought to force the governor to declare a peacetime state of emergency and follow it with a mandate, Minnesota Public Radio reported. In other states, governors who’ve tried to prevent school districts from requiring mask use have been blocked by courts.

PORTLAND, Maine — Two of the top-ranking Democratic members of the Maine Senate have tested positive for COVID-19 despite being fully vaccinated.

Jackson says he’s isolating after testing positive. He hadn’t experienced symptoms but decided to undergo a rapid test after learning a close contact had the virus.

Jackson said he was grateful to be vaccinated since vaccines have proven to be effective in preventing severe symptoms and hospitalizations. Vitelli says she was experiencing only mild symptoms on Wednesday.

STORRS, Conn. — There’s been a mix of coronavirus requirements at universities and colleges in the U.S.

At most of the largest public universities, students aren’t obligated to be vaccinated against COVID-19. Some schools do require vaccines, but with leniency for those who opt out. Still others have expelled students who don’t comply.

An analysis by The Associated Press shows 26 of the nation’s 50 largest public universities aren’t requiring the vaccination.

Universities with vaccine mandates are concentrated in the Northeast and California. Most without mandates are in states that restricted the ability to implement vaccine requirements, including Florida, Texas and Arizona.

As a new semester begins amid a resurgence of the coronavirus, administrators and faculty nationwide see high vaccination rates as key to bringing some normalcy back to campus. Where mandates face political opposition, schools are relying on incentives and outreach to get more students vaccinated.

ST. LOUIS — A child has died of COVID-19 in Missouri as the coronavirus sickens record numbers of youths in the state.

The death brings the total number of Missouri children younger than 18 who have died from COVID-19 to six, according to state health department spokeswoman Lisa Cox.

On Sept. 7, there were a record 1,133 positive test results for Missouri children younger than 18, topping 940 set on Nov. 9, according to an analysis released Tuesday by the Missouri Hospital Association.

Some local health departments in the St. Louis area have reported up to a third of new cases are among children.

Dr. Clay Dunagan, chief clinical officer for BJC HealthCare, cited the more infectious delta variant and schools not taking steps to reduce spread, such as requiring masks. Children younger than 12 aren’t eligible for vaccines, and vaccination rates among teens lags that of adults.

The meeting Wednesday follows Biden’s announcement last week that the Labor Department is working to require that businesses with 100 or more employees order their workers to be fully vaccinated or submit a negative COVID-19 test at least weekly. Biden said 100 million workers would be subject to the requirement.

Some business groups, including the Business Roundtable, welcomed the president’s announcement.

“America’s business leaders know how critical vaccination and testing are in defeating the pandemic,” Josh Bolten, president and CEO of the Business Roundtable, said in a statement.

Some Republicans accused Biden of overstepping his authority and have threatened to sue the administration over the vaccine mandate.