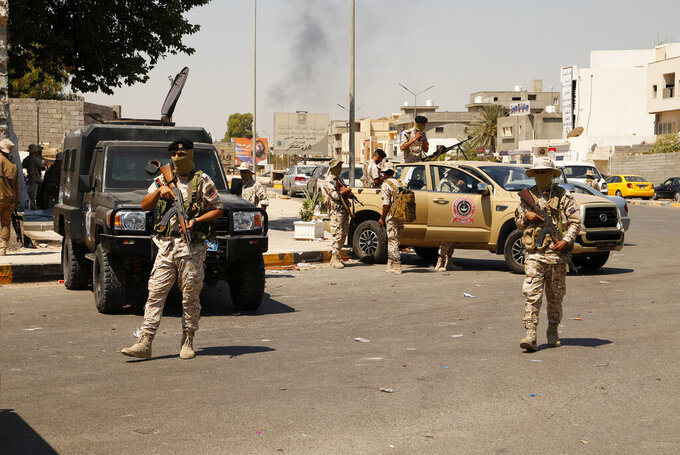 Yousef Murad, ASSOCIATED PRESS
Libyan army forces and vehicles are stationed in a street in the country’s capital of Tripoli on Friday, July 22 2022. One of Libya’s rival governments on Friday called on militias to stop fighting, after clashes broke out in the country’s capital, Tripoli overnight, killing at least one civilian and forcing around 200 people to flee the area.(AP Photo/Yousef Murad)

BENGHAZI, Libya (AP) — Clashes between competing militias in Libya's capital on Friday killed at least 13 people, despite calls for calm after violence first broke out the previous night, a spokesman for Tripoli’s emergency services said.

It was the latest escalation to threaten the relative peace after nearly a decade of civil war in Libya, where two rival sets of authorities are locked in a political stalemate. The divisions have sparked several incidents of violence in Tripoli in recent months, but most have been over in a matter of hours.

According to Osama Ali, the emergency services spokesman, among those killed since the fighting started late Thursday were three civilians from the area and a 12-year-old child. He also said 30 people had been wounded.

Earlier in the day, one of Libya’s rival governments had called on militias to stop the fighting, which forced hundreds of people to flee the area.

The Libyan Presidential Council, based in Tripoli, said all forces involved in the clashes should go back to their bases immediately. Malek Merset, another emergency spokesman, said 200 people had already fled the area, some of them who were attending a wedding. He called for the firing to stop so more could leave.

The clashes spread to other areas of the city. The Mitiga airport, Tripoli’s only working airport, announced that it was closing out of concern for passenger safety. The U.N. mission to the country also called on all parties involved to exercise restraint.

Libya has for years been split between rival administrations in the east and the west, each supported by various well-armed militias and foreign governments. The Mediterranean nation has been in a state of upheaval since the 2011 NATO-backed uprising toppled and later killed longtime dictator Moammar Gadhafi.

The cause of the fighting was unclear. However, there were indications it was part of the ongoing power struggle between militias backing the country's rival administrations. Videos shared on social media showed local militia forces deploying and heavy fire being exchanged across the night sky.

The country’s plan to transition to an elected government fell through after an interim administration based in Tripoli, headed by Prime Minister Abdul Hamid Dbeibah, failed to hold elections last year. Dbeibah was meant to share executive power with The Presidential Council in Tripoli until an elected government could take over. The postponement drove aground yearslong U.N.-led attempts to usher in a more democratic future and bring the country’s war to an end.

Dbeibah has refused to step down since then, raising questions over his mandate.

In response, the country’s east-based lawmakers have elected a rival prime minister, Fathy Bashagha, a powerful former interior minister who is now operating a separate administration out of the city of Sirte. An attempt in May by Basghagha to install his government in Tripoli also ended in clashes that killed one, after which he withdrew.